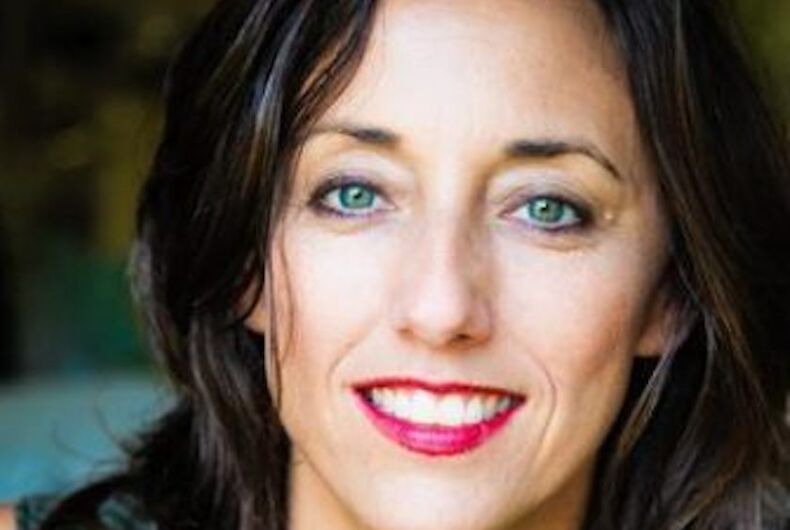 It might feel or seem like there are positive media images of LGBTQ people all around us. Whether it’s streaming, or YouTube or even network television, it can feel like we as LGBTQ people have  finally made it when it comes to visibility in Hollywood. Not so, says Monica Trasandes, GLAAD’s Director of Spanish-Language & Latinx Media & Inclusion.

“I would say there’s more visibility than there used to be, but there’s not enough, especially for movies that go into wide releases and that will be seen in small towns and around the world,” said Trasandes.”A lot of times we’re in arthouse films, which is wonderful, but we need, in addition to that, we need to be in the large ‘tentpole’ films, too.”

For the last 12 years, Monica has been working at GLAAD to help Latinx people tell our stories in Spanish-language and Latinx media, as she puts it. She has been working in the media since college, where she says she discovered “her people” among the writers and reporters and editors she met on campus at UC-Santa Barbara.

It was after meeting her folks in college that she thought she might come out, though she had come to realize her truth in high school. Trasandes and her parents are from Uruguay, a fairly liberal country, and her parents, she said didn’t grow up with many negative feelings towards LGBTQ people.  Yet she was afraid that coming out as a lesbian would mean losing her family. When she looks back at that time, however, Monica sees a different force at play.

“I was very scared to lose my family, and that was because of all the societal messages we all hear, which is one of the reasons I’m at GLAAD. I don’t want young people to hear those messages anymore.”

Monica has been fighting back against LGBTQ invisibility in media as well as negative and inaccurate and stereotypical media portrayals for much of her adult life. For over 10 years, she was the editor of what was California’s largest bi-weekly LGBT news magazine, Frontiers.

“People were often surprised to hear that a woman was editing the magazine, but it was fun and interesting, and I loved the essays and fiction we got to publish,” said Trasandes.

Though she no longer works to put out a regular magazine, Monica is constantly in contact with media people to make sure they are being inclusive in their coverage, whether it is news, TV or movies. And it’s work she takes pride in, especially since she comes from the same world that so many of the people who benefit from her advocacy do.

“I think most media people are very good people who want the world to be a better place,” said Trasandes.

For Monica, while progress has certainly been made, there is still a dearth of variety when it comes to images and portrayals of LGBTQ people, which means the work goes on. And, every year she sees just a little bit more progress made.

“When I first started at GLAAD, when I would congratulate people for getting a GLAAD Media Award nomination, I might hear silence,” said Trasandes. “People weren’t all that sure they wanted to be recognized by us, but now, usually, there’s a lot of excitement and just generally a desire to be more inclusive than there was in the past. For that, I’m really happy.”

“I want to inspire young people to keep fighting in the LGBTQ space to show that we’re here,” said Trasandes.

This means calling attention to what’s going on in the current political climate for LGBTQ people and for Latinx folks, something that’s integral to the work she does everyday at GLAAD.

“Everyone I love is living in a culture where anti-Latinx and immigrant racism has almost been given a green light and that’s incredibly upsetting,” she said.

To fight back against this kind of prejudice and bigotry, Monica provides media trainings for groups and individuals at the forefront of this battle.

“A lot of the prejudice we [as LGBTQ people] experience comes from what people see in the media,” said Trasandes. “So, I do as much as I can in media training activists who are working in different spaces so they can also do what GLAAD has done over the years, which is help media tell our stories.”

It took her a while to come to terms with her sexual orientation, but when she did it was in Spain, where she was studying abroad.

It was about a year later, in the late ’80s, when she finally told her parents. Monica’s mother had witnessed her being affectionate with a girlfriend at the time. However, she didn’t say anything about it until later.

It was while on a trip away with that girlfriend that Monica’s mother decided to ask her sister whether it was true. And, when Monica returned home there were a slew of messages waiting for her to return, from her mother and sister.

She called her mother and told her the truth. At first there was some hesitation and worry, but it became clear to Monica that that worry was rooted in their concern for how the world would treat her.

“And, where did those ideas come from? Media! Why did they have this idea that gay people are treated badly and laughed at? Because that’s what they see in media,” said Trasandes.

“Don’t succumb to the hate or the prejudice,” Trasandes says. “We fight the hate, but do your best to not let it define you because it can be challenging out there. Just do your best to have a good life and have as much as fun and joy as possible. Be around people who love and support you.”