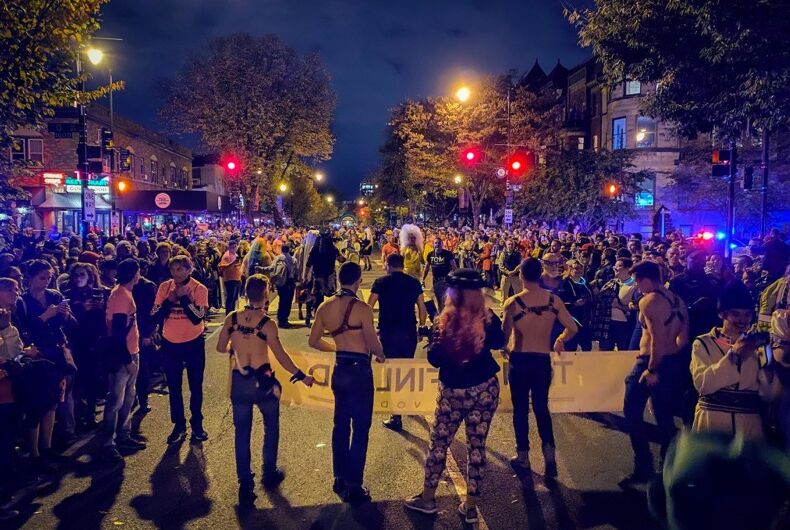 Washington DC’s annual High Heel Race saw over 100 drag queens and costumed revelers parading through the streets last night as a screaming crowd urged them on. Mayor Muriel Bowser (D) has kicked off the race every year since taking office.

The costumed extravaganza draws over 1000 spectators to watch the queens parade up and down the streets before the race starts. Only a small percentage of participants actually run the course; most promenade to the finish line to wild cheers at the elaborate costumes.

Since 1999 a gay bar has been the lead organizer, but since the event is free, organizers didn’t make any money to pay for street closures and emergency personnel. The city has provided those services for years and the mayor’s office became the official sponsor last year.

This year’s parade and race featured contestants lit up with LED lights, bewigged beauties, and, of course, a group of National’s supporters. And, of course, social media documented every moment as the crowd ate it up.

Thank you to all who came out for the 33rd annual 17th Street High Heel Race! I am #DCproud to lead a city that values diversity and inclusion. A city that is home to the best queer community in the world! #DCvalues pic.twitter.com/X4jczbMq8F

No one said it better than the whistle blower queens at the high heel race tonight #letsgonats pic.twitter.com/jLWmqdkuvU

Did you know that in DC there is a yearly drag queen high heel race? And that, like, thousands of people show up to watch? I didn’t. Now I do. pic.twitter.com/9O06BDqTQC

The annual 17th St high heel race where a bunch of drag queens run down the streets of dc in heels 👠👑 pic.twitter.com/wSZzGYXSjJ

(While local resident Ted Eytan uploaded dozens of incredible shots, not all of them made it to social media but they’re definitely worth checking out on Flickr. He took the main image for this article.)