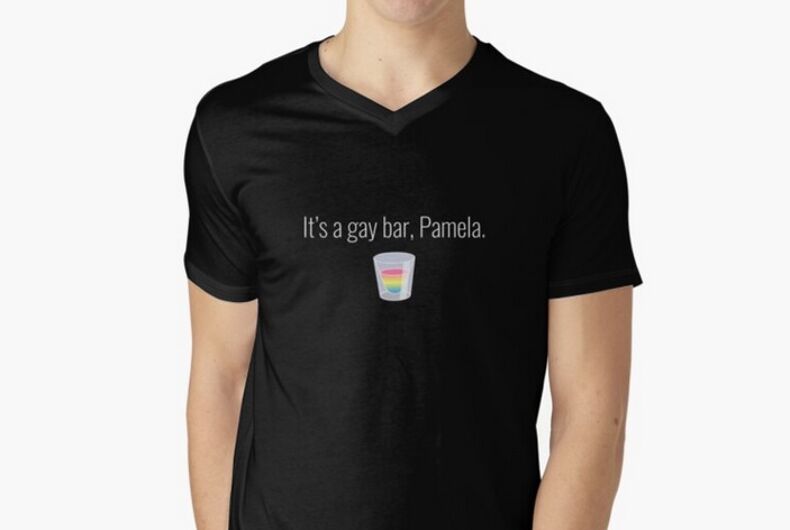 A Trump supporter’s ignorant comment about a gay bar has resulted in a hilarious meme and a rainbow-colored pin immortalizing her cluelessness.

When Trump held his October 10 rally in Minneapolis, Minnesota, the Saloon nightclub – which has a 96% rating on Gay Cities – protested by flying the giant “Trump baby” balloon from its rooftop.

A news article about the Saloon’s protest agitated Trump supporters and his detractors on Facebook, leading an older woman named Pamela to state, “The Saloon lost my business.”

A surprised commenter asked, “Were you a frequent visitor??”

Admittedly, Pamela wasn’t the only (presumably straight) Trump supporter declaring their intention to boycott the Saloon. Citypages.com writes, “There were other older Trumpsters (on Facebook) — some seemingly pictured with their opposite-sex partners — who made similar gaffes,” pledging to stop going to a gay bar whose website touts its “excess of gorgeous men to meet.”

The Saloon also regularly hosts drag shows, gogo boys, leather gatherings, showtune singalongs, and a backroom for sexual trysts, all of which are surely enjoyed by older Trump supporters like Pamela.

Social media users took screenshots of Pamela’s comment and its aforementioned responses and began clowning her around the web. One person even turned the phrase, “It’s a gay bar, Pamela,” into a rainbow-colored enamel pin — it’s available for $10 with 50% of proceeds going to Out Front Minnesota, the state’s leading LGBTQ organization.

The phrase has also been turned into a t-shirt.

Alright, who turned Pamela’s ridiculous comment into a T-shirt? from Minneapolis

Pamela didn’t respond to media requests seeking to understand how long she’d patronized the Saloon before it “lost her business.”

In all likelihood, she never went to the bar at all but merely made her statement as an empty threat to discourage a bar from exercising its free speech against the most anti-LGBTQ president of all time.

He attacked two gay men while screaming slurs. He got 15 days in jail.