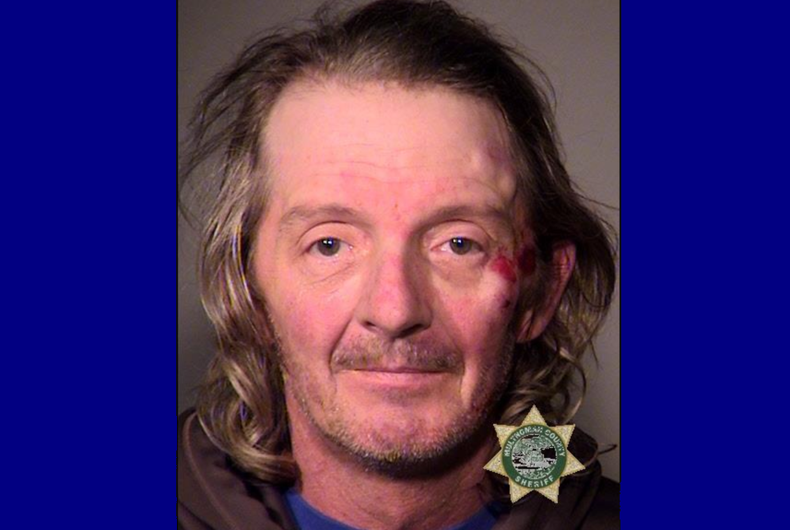 A man who attacked two gay men while shouting slurs got sentenced to 15 days in jail. With credit for time served, he will not spend any more time in prison for the attack.

Don Kirchhoff is accused of attacking two gay friends who were sitting on a bench outside Lovejoy Bakers in Portland, Oregon, this past September. One of the victims is black and the other is white, and Kirchoff allegedly shouted homophobic slurs at them and used a racist slur for the black man.

Kirchhoff then attacked, pushing the white man against a brick wall. The victim had lacerations on his head and abrasions on his neck and back.

The men tried to walk away, but Kirchhoff went after them, pulling on their clothes. One of the men turned around and punched him and they left.

His defense attorney said that he was “severely intoxicated” and doesn’t remember the attack. She argued that Kirchoff is a veteran who suffers from post-traumatic stress disorder and uses alcohol to self-medicate.

“That’s not a good solution for him, and he knows that,” the attorney told the court, asking for leniency.

Kirchhoff pled no contest to one count of bias crime in the first degree, a felony. He was sentenced to 15 days in jail and three years of probation. He also has to stay away from Lovejoy Bakers and the victims.

This past Friday, he pled guilty to felony strangulation in a separate case – he was accused of strangling his girlfriend. She survived the attack, and he was sentenced to 30 days in jail and three years probation in that case.

As part of his probation he will have to wear a device on his wrist that will alert authorities if he consumes alcohol.

“Actions speak louder than words,” he told the judge. “I know I have a lot to prove to other folks besides the court, that’s my goal. To move toward a cleaner path.”

It is the first time that Oregon’s new hate crimes law has been used in the county since it went into effect this past July, according to prosecutors. The new law increased some bias crimes to felonies and added gender identity to the list of protected classes in the state.