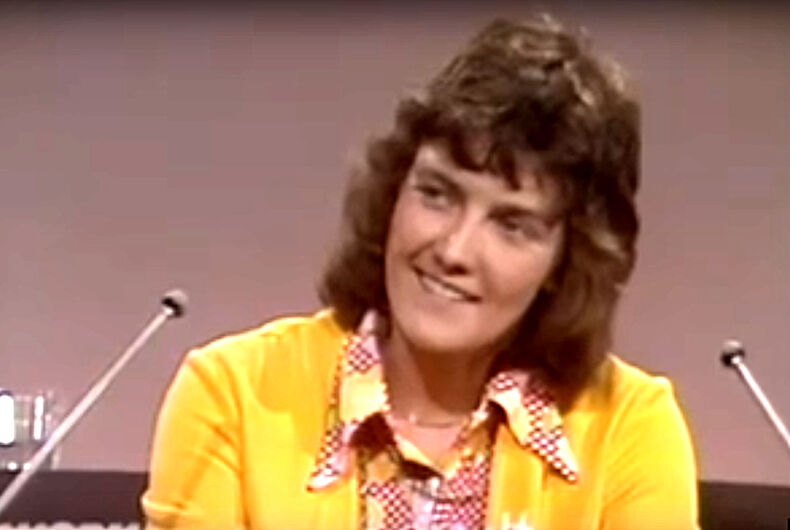 Yes, this is a picture of the first out gay person elected to a major political office. No, this is not a picture of Harvey Milk in drag.

It is a photo of Elaine Noble, elected to the Massachusetts House of Representatives in November, 1974, three years before Milk was elected to the San Francisco Board of Supervisors, and, actually, she was the second out elected official.

The first was 21-year-old Kathy Kozachenko elected to the Ann Arbor, Michigan, City Council in April, 1974. Prior to her election, council members Nancy Wechsler and Jerry DeGrieck had come out in office and convinced the majority of the council to vote to add “sexual orientation” to Ann Arbor’s antidiscrimination ordinance. 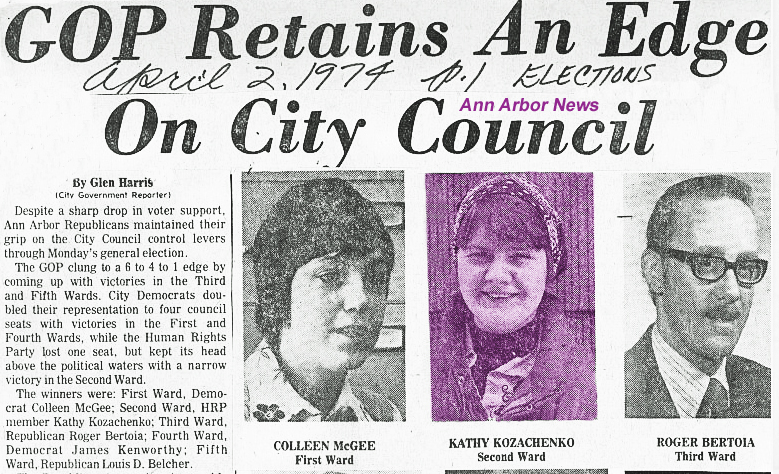 In the same election Kozachenko won, councilman Clyde Colburn lost reelection, then told local media, “This city is being taken over by hippies and faggots.”

Among the issues she worked on was trying to get the council to support Ann Arbor Gay Pride Week. 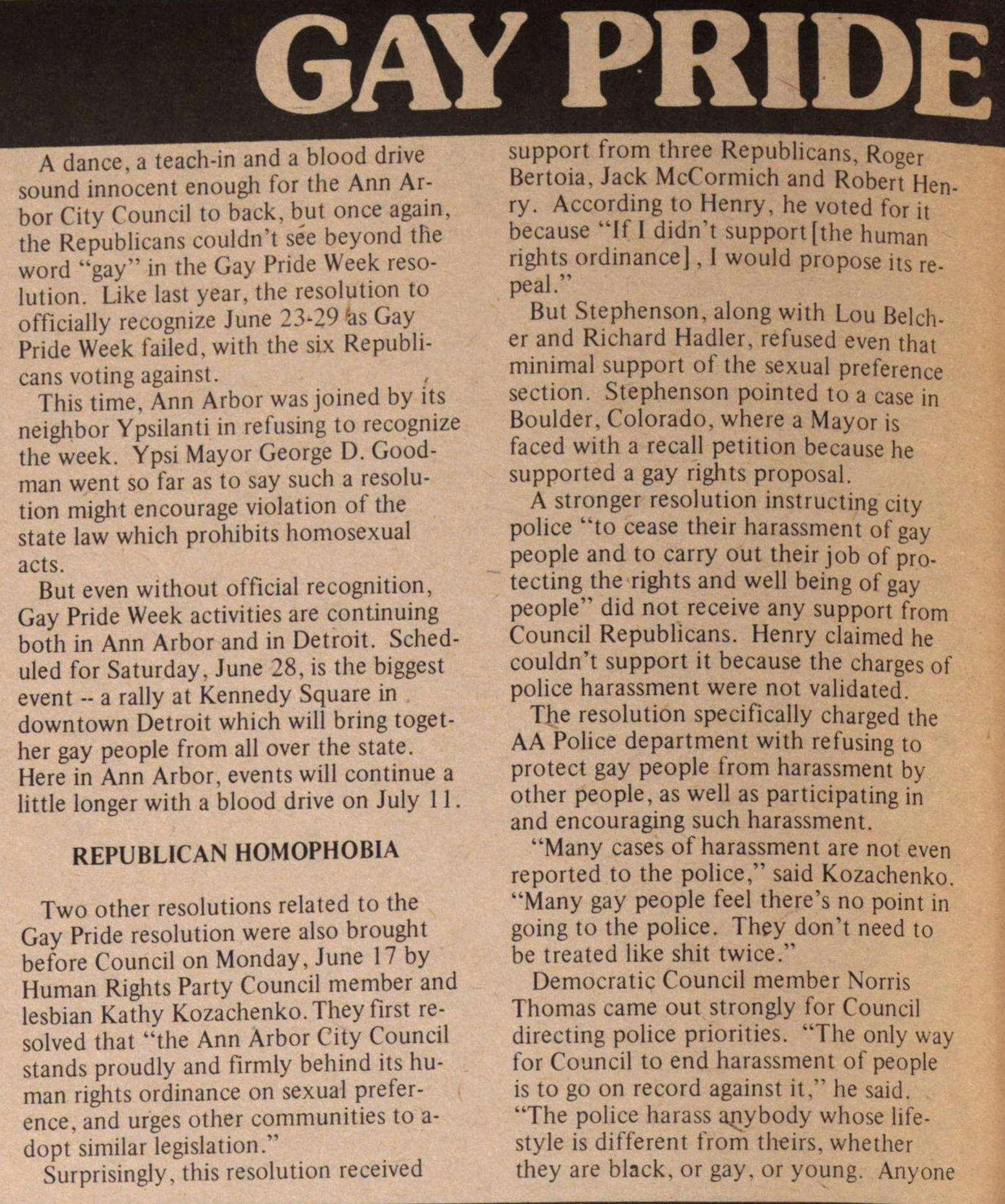 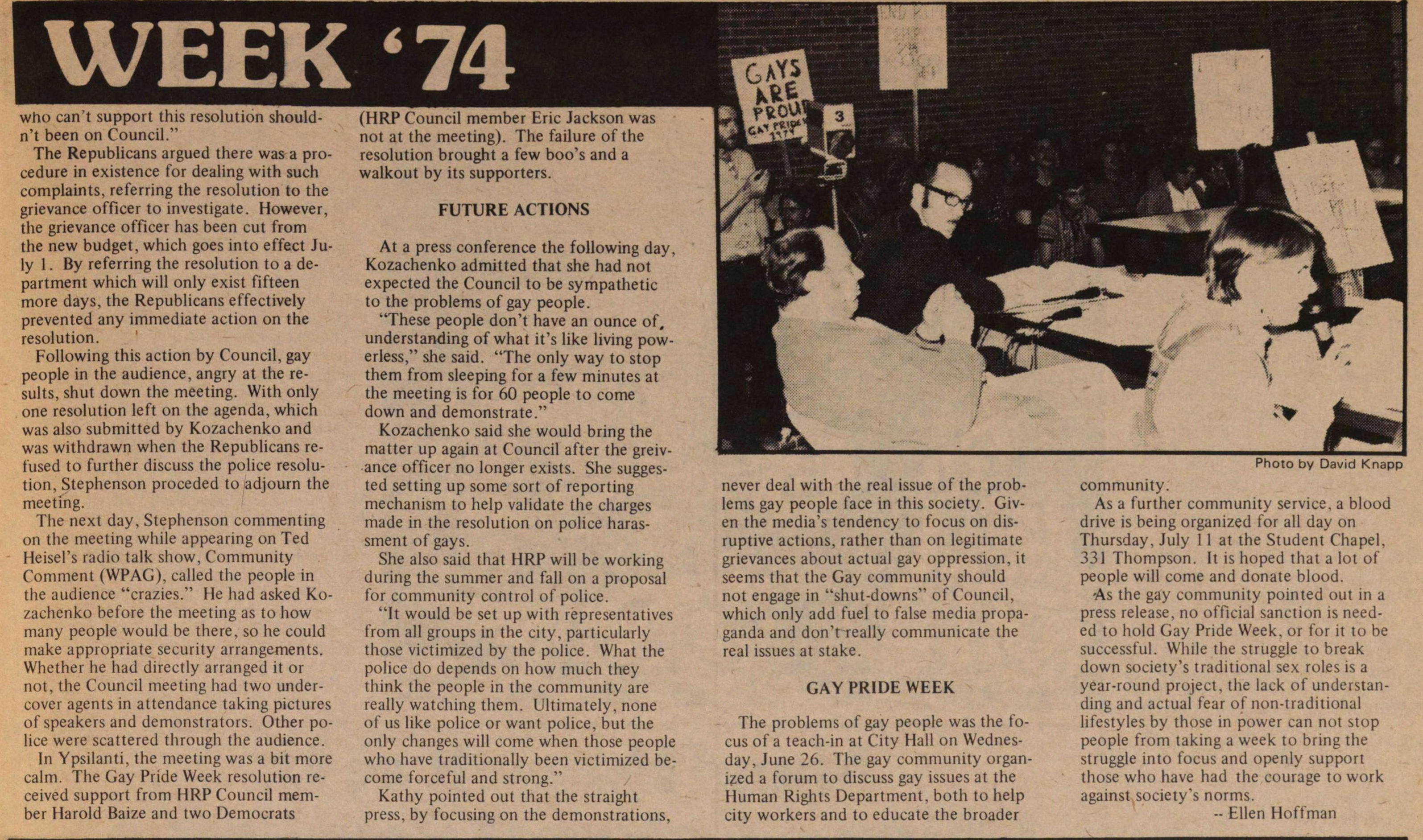 In May, 1974, before her history-making fall victory, Noble made history in another way: in the first nationally televised debate on marriage equality.

Before being talked into running by Ann Lewis, the sister of then still-closeted Massachusetts Assemblyman Barney Frank (D), Noble, a speech teacher at Emerson College, was a respected community activist, cohost of a local radio program called Gay Way, a member of the Daughters of Bilitis and the National Organization of Women (NOW), where NOW cofounder Betty Freidan – who fought fiercely to keep lesbians silenced in the organization and gay rights out of discussions – accused her of being a plant by the CIA to disrupt the women’s equality movement by only pretending to be a lesbian.

She was known to “call up the towering, gun-toting, thoroughly Irish Roman Catholic city councilman ‘Dapper’ O’Neil, sometimes waking him up at night, using her shrewd and saucy womanly charms to get him to go downtown to get [young gay men arrested by the Boston police for soliciting] out of jail. ‘I’ve got a nice Irish boy, Dap, and his mother doesn’t know he’s a homosexual,’ she’d say. ‘Please, Dap.’”

“And Dapper O’Neil would rise, dress, and lumber into the jailhouse. ‘Take it off the roster. Take it off the roster. This guy was never here,’ he’d say to the cop behind the desk. And then, turning to Noble, ‘You make sure your friends remembers me at election time,’ he’d rumble, and head back home to bed.” – Dudley Clendinen and Adam Nagourney, Out for Good: The Struggle to Build a Gay Rights Movement in America.

The campaign was one of the ugliest in modern Boston history. Four days before the election her opponent sent a letter to voters that read in part: 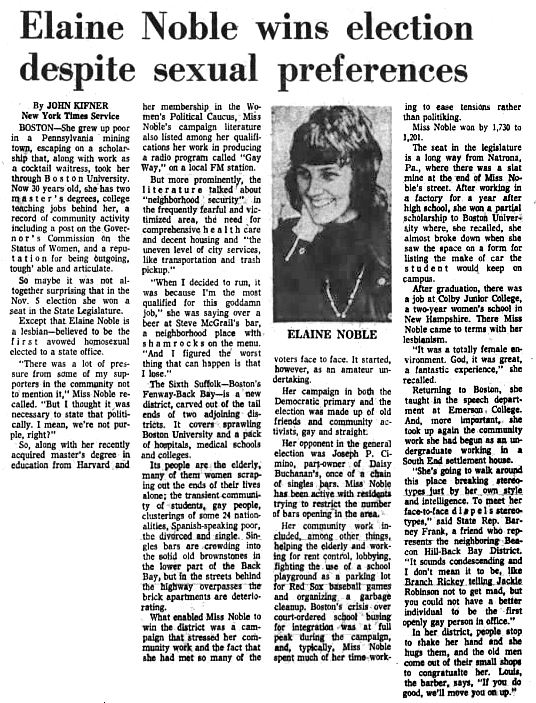 Her lover at the time was another experienced activist, Rita Mae Brown, whose lesbian novel Rubyfruit Jungle was a best seller and is featured in this documentary that begins with the night Noble won the election which made headlines around the world.

The ugliness didn’t end with her win. “One day, I was walking to the State House and there was a guy, 85-years-old, and he walked up and said, ‘Rep. Noble.’ And I reached up to shake his hand and he spit on me.”

In the State House, she encountered so much sexism from her male colleagues that she took to handing out little yellow cards that read: “You have just insulted a woman. In 30 seconds your penis will fall off.”

And someone put feces in her desk drawer.

I met her in 1975 when she spoke at the 2nd Indiana Gay Awareness Conference at Indiana University which I helped organize; one of the few people I’ve met with natural charisma which, along with her intelligence and sense of humor, enabled her to command attention in any space she was in. At our request, she met privately with Bloomington’s mayor to lobby him to support passage of a local gay rights ordinance which he did.

It wasn’t until many years later than I learned of all she was going through in Boston and that the harassment at her office and home soon escalated from threatening phone calls and mail to her apartment windows being shot out with a pellet gun and bullet holes riddling Brown’s car. She sought help from the state attorney general who sent a private investigator who discovered that they were the acts of a lesbian couple and a male accomplice.

After reported to local authorities, there was a break in at Elaine’s home office while Rita was upstairs frightening her enough that she broke off their relationship and moved out that night.

As for the three who had been terrorizing them, strangely, the judge only ordered them to leave town.

Noble won reelection but decided not to run a third time because redistricting meant her opponent would be Frank.

When asked if her high profile election and time in office contributed to later movement successes, she replied: “I think I was just one piece in a conga line that led [to other victories].

The assertion that Harvey Milk was the first gay to be elected is not as ubiquitous as it was in 2008 when the claim appeared in promotional materials for the film Milk. But it keeps popping up, including in an article this summer about the opening of Harvey Milk Terminal 1 at San Francisco Airport.

But that’s not true, either. While the first two elected were women, the first out gay man was Allan Spear.

When he was first elected in 1972, The Advocate reported that he was gay but every other media outlet, straight and gay, seems to have missed it. A history professor at the University of Minnesota specializing in Afro-American history, like military gay rights pioneer Leonard Matlovich, learning about the Black civil rights movement helped Spear accept his homosexuality.

Like Matlovich and Pete Buttigieg, Spear didn’t come out personally until he was in his thirties leading to his public self-outing in December, 1974, inspired by Elaine Noble. 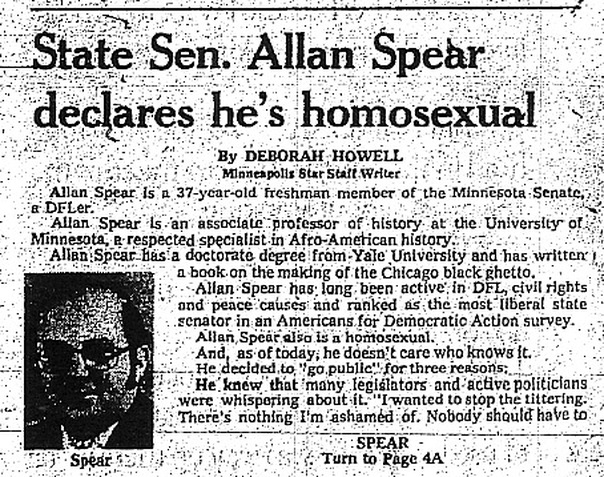 Like Buttigieg, his trust in his constituents was rewarded when he was reelected to the Minnesota State Senate in November, 1976, which was heavily reported in mainstream media. 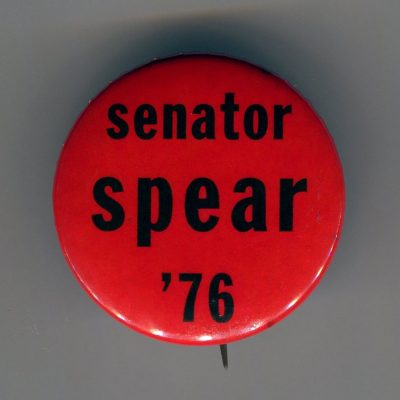 A variation of the Milk/When We Rise claim sometimes appears, such as the Facebook graphic from the Milk Foundation in January of last year effectively saying that Milk should have precedence over the non-mentioned Spear because he was the first gay “non-incumbent” elected. But neither Kozachenko or Noble were incumbents when they ran, and Spear still had to win; incumbency never guaranteeing reelection. 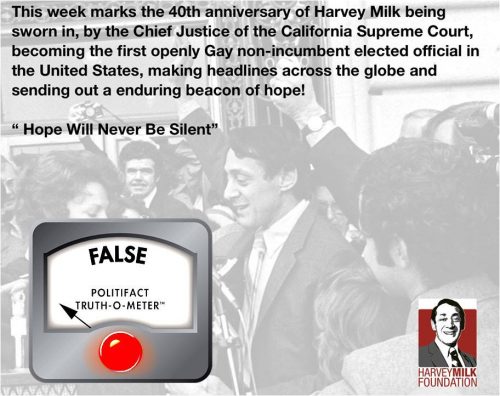 Spear was also the first out gay leader of a state legislature, serving as the Senate’s President from 1992-2000. In all, he was there 28 years, during which time – after 20 years of trying – he succeeded in passing Minnesota’s Human Rights Act in 1993, guaranteeing protection from discrimination in education, employment, and housing because of sexual orientation.

It was also the first state law to include transgender people.

During the intensely emotional debate in the State Senate, Spear said:

I’ve been told by many people that oppose this bill that sexual orientation should not be included in the human rights law because it is a choice, because it is a choice that people make, and if they make a choice, they can change that choice. Well, let me tell you, I’m a 55-year-old gay man and I’m not just going through a phase.

I can assure you that my sexual orientation is not something I would choose like I would choose to wear a blue shirt and a red tie today. Why in the world would I have chosen this? I did everything I could to change: I dated girls, I denied my inner feelings, I sought psychiatric care.

I could do nothing about what I was. I did make a choice. My choice had to do with how I would deal with who I was. I chose, after many years of hiding who I was, to be open, to be who I am and to live my life without shame or apology and that’s a choice I’ve never regretted.

Along with ten other Republicans, Spear had convinced the Republicans’ Senate minority leader – a Calvary Lutheran Church pastor and National Guard general – who told the assembly:

It would be easy to vote against it, more popular with the folks back home, but we were elected to lead, to do what is right, and to do what is just and to seek justice. . . . I’m going to vote yes, and extend to a group of people in the State of Minnesota what I consider their civil rights, their human rights, that they, too, can live with dignity.

Audio of a 1993 interview with Spear is here.

Spear died in 2008, two weeks before the film that erased him opened in San Francisco.

Jim Yeadon was a cofounder of Madison, Wisconsin’s, Alliance for Homosexual Equality (MAHE), the first gay rights organization in the state, formed in the fall of 1969 after Stonewall, and the University of Wisconsin-Madison Gay Law School Students Association. He also served on the Madison Equal Opportunities Commission where he was instrumental in helping to rewrite the Madison Equal Opportunities Ordinance to ban discrimination against gay people in housing, employment, public accommodations, and access to city facilities.

In October 1976, he was selected by the Madison Common Council from among eight candidates to fill an unfinished term of an 8th district alderman. The next day he told the campus Daily Cardinal, “I’m a vegetarian and I’m gay.”

He was elected by public vote to a full term in April 1977, becoming the first successful openly gay candidate elected to public office in Wisconsin, and fourth in the nation. An article in the conservative campus newspaper The Badger Herald reads: “In very few other cities besides Madison could a self-confessed homosexual like James Yeadon be considered anything but a protest candidate.” 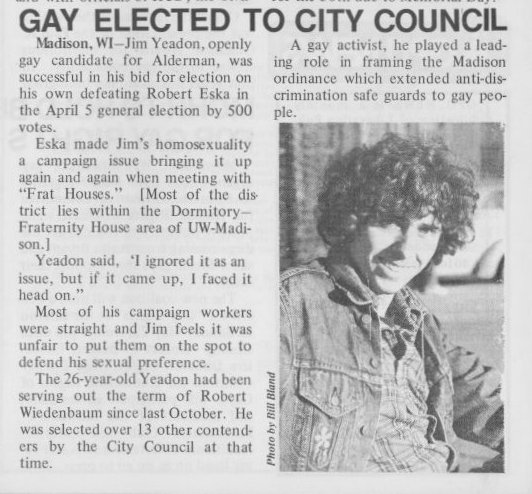 In addition to receiving a few explicit death threats, some were implied such as the postcard he got from the head of the CC Riders motorcycle gang “saying he had donated blood in my name in case I ever needed it.”

In November of 1977 Harvey Milk was elected to San Francisco’s Board of Supervisors. The night after he and San Francisco Mayor George Moscone were assassinated in November 1978 was a regular Madison Council meeting. During the first five minutes of every meeting, a single council member was allowed to say a prayer or whatever else they wanted. Jim Yeadon:

“It was not my turn that night, but I begged them to let me do the opening. I said, ‘Yesterday, there were five openly gay elected officials in the country. Today there are four. And I don’t know how many good mayors we have but I know we have one, and the world is one the less’. And then I asked people to bow their heads in thought for the people of San Francisco.”