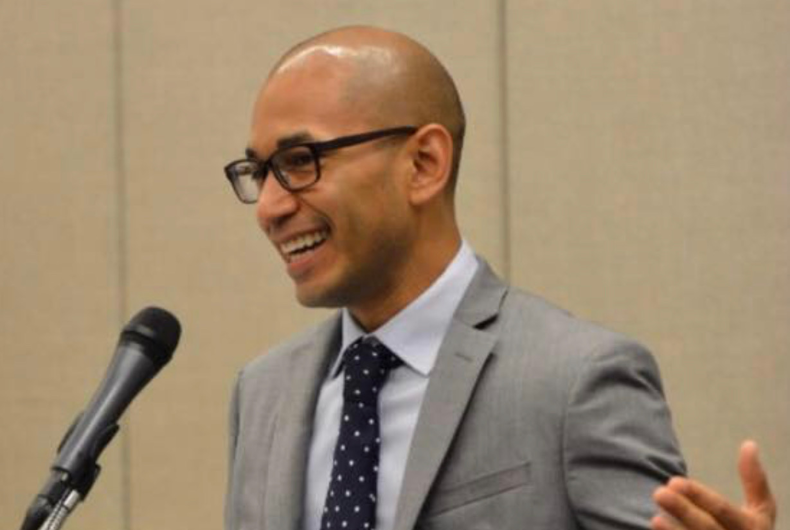 Steven Lopez is a Valley boy. The Central Valley of California, that is. A place that early on shaped his perception of his place in the world and which would have a major impact on his career path toward working in public health.

“The Central Valley feeds the world,” said Lopez. “There’s just no other place like it.”

Related: How a lifetime dedicated to increasing visibility can lead to self discovery

The small farming community of Exeter, California, based at the foothills of the Sierra Nevada is where he calls home. The Valley is rich in farmland that is responsible for much of the country’s food. He grew up seeing so many in his community who strove exceedingly hard to provide for their families and create opportunities for their children.

One thing Steven says he never takes for granted is the role the Valley plays in helping folks put food on the table. Drive down numerous roads back home, he says, and you will see an array of crops and the laborers harvesting them.

“And then you get to the grocery store and you see that produce, and you know part of the story of that orange that’s sitting in Safeway or the almond that’s in that pretty bag, or those grapes in that container. It’s likely that those products came from the Valley and you know the various folks in the ecosystem who are responsible for it,” said Lopez. “That just adds another level of respect and appreciation for the many hardworking folks who live there.”

It’s this pursuit of respect for and pride in his community that has largely driven many of the major decisions he has made with respect to his career. And, it would eventually lead to his current role as the director of health policy for the largest Latino civil rights group in the country, UnidosUS (formerly known as the National Council of La Raza)

To achieve this goal, Steven initially pursued education as his advocacy means. His mother was a cafeteria worker and his father worked in a grocery store. They didn’t have the opportunity to pursue higher education, but they knew that what progress looked like for their kids was having more opportunities than their own, and education was one of the ways to ensure that progress.

It was during the drive to begin at Stanford which truly crystallized this understanding.

In their youth, Steven’s parents spent their summer months as migrant farmworkers based mostly in Northern California and primarily in the region near Stanford. As they drove past the communities they worked as teenagers, Steven, half-awake, overheard them reminiscing about the cherries, and plums, and other fruits they harvested so many years prior.

“I remember them remarking, ‘And now here we are driving our son to one of the best universities in the world,’” said Lopez. “It was a special moment that really reinforced educational opportunity and the difference it can make.”

While at Stanford, he got involved with Upward Bound, a federal TRIO program that supports first-generation students to go to college and have the tools to succeed. Over the course of his time with the program, he began to realize that various health issues were impacting his students’ academic success.

“I began to connect the dots, and was like, well, if my students or their families aren’t healthy, that’s impacting their ability to be academically successful,” said Lopez.

This piqued his interest the connection between student success and health and really dove into finding out more about how health plays a role in society.

Upon graduation, Steven accepted an offer with the Congressional Hispanic Caucus Institute in Washington, DC, where as a public policy fellow, he had the opportunity to work with then Rep. Hilda Solis (D-Calif.), who has been a longtime champion of public health, especially for marginalized communities. He spent nine months working for Rep. Solis, and says he learned there the importance of including voices that historically are not part of the conversation or the debate.

“The Latino community has a lot to gain from policy that reflects our priorities, our needs, and our interests and is successfully implemented. We also have a lot to lose when it comes to policy that doesn’t,” said Lopez. “Working for Representative Solis reinforced that we need more voices of color, we need more intersectional voices as part of the policy-making process, especially in health.”

Since that early work in Rep. Solis’ office, Steven says he’s never looked back. He earned dual masters degrees in Public Policy and Public Health from UC Berkeley and eventually landed a position back in Washington at UnidosUS, where he leads the organization’s health policy work. There, Steven has been instrumental in making sure Latino voices are heard when health policy is being written. Much of his work is focused on ensuring children and their families have the building blocks to be healthy and thrive, including health coverage and good nutrition.

“Every day I strive to do as much as I can  to make sure that our community’s voice is represented in a substantive, influential way,” said Lopez.

Steven sees his work through taking the long view, and likens it to planting the seeds of a tree he may not see.

“For much of what I do, I know I’m not going to see the immediate outcomes, but I believe that what I’m doing is contributing to broader positive influence and impact for generational change,” he said.

Steven uses the example of the ACA implementation  over the last few years, in which UnidosUS was heavily engaged, to highlight this.

“We’ve worked really hard to ensure the law is implemented successfully, especially for communities that face some of the greatest barriers in accessing health coverage and care. Over 20 million Americans, including 4 million Latinos and 600,000 children, have gained coverage since major provisions of the law went into effect. I believe that UnidosUS contributed to this success, to a family’s ability to take their children to the doctor instead of the emergency room or the woman with cancer who now has access to life-saving treatment,” he said.

In the summer of 2000, Steven had the opportunity to do an internship on Capitol Hill. That summer marked his first time on the East Coast. It was also the first time he experienced a queer relationship.

The internship in Washington allowed Steven the chance to more thoughtfully reflect upon this “new” version of himself.

“It gave me the space I needed to explore without the proximity to my family, to figure things out on my own and in an environment that was detached from my everyday reality,” said Lopez.

Upon returning back to California, as Steven walked off the plane, he recalls that he felt like he had made a turning point in his life over that summer.

“I remember thinking what has transpired, what I’ve learned, and experienced, I’m forever changed. And it’s for the better,” he said.

Steven was different, and more aware of who he was. He had decided that it was time to tell his parents who he was. He used the family’s annual camping trip to do so.

Over a camp fire one night, with only Steven and his parents around, he told them that after returning from DC, he wanted them to know that he felt different and that there was something they needed to know.

After a short pause, he says his mom just looked at him and affirmed the comment, saying, “Yes. I know.”

And that was it. In later conversations, she explained that she had known he was but that she knew he needed the space to discover it on his own.

“She told me, ‘I’m your mom and I carried you for nine months. I knew you were, and I knew you needed to come to your truth in a way that was safe and reaffirming for you, but I was waiting for you to come to this realization on your own.’”

His father was at first concerned that he hadn’t spent enough time with him as a child, a notion he and his mother quickly dispelled for him. He would come out to his siblings and wider family incrementally over the next few years. While he had an overall positive response from his family, Steven is very aware of the privilege that that has afforded him as an out gay man.

“My experience, for the most part was a positive one, and I don’t take for granted the fact that too many youth don’t have a positive experience,” said Lopez.

“I continue reminding myself to be anchored in being of substance and having impact. It’s easy to focus on titles and accolades and while it’s certainly nice to be recognized for what you do, for me, I continue asking myself if and how I’m having impact. What am I doing to leave this world a more just, equitable, and loving place, to create greater opportunity for the communities and families like where I’m from?”

Coming out to a cab driver in a homophobic country