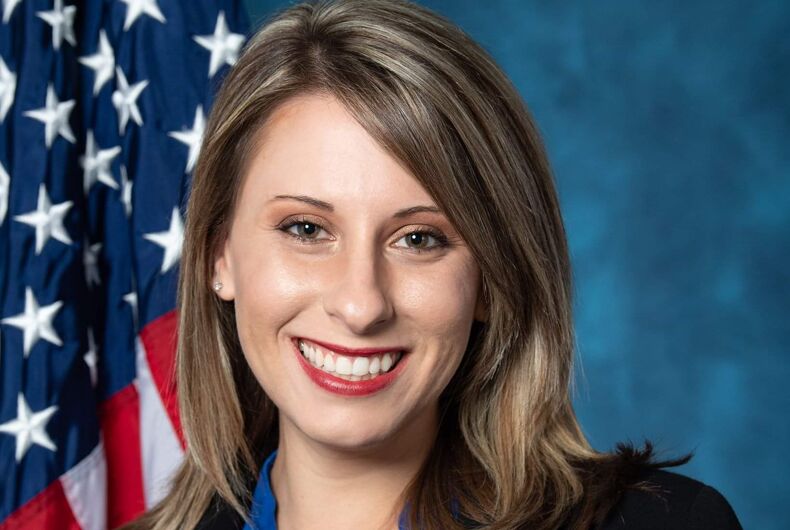 After days of speculation about whether she had an inappropriate relationship with a staff member of her office, Katie Hill announced today that she is resigning from her post as a U.S. Representative.

The bisexual Democrat from the state of California said in a statement that she is leaving office to end the pain her family, friends and supporters have to endure due to her “abusive husband and….hateful political operatives.”

”I know that as long as I am in Congress, we’ll live fearful of what might come next and how much it will hurt. That’s a feeling I know all too well,” Hill’s statement continues.

Hill is under scrutiny due to an alleged sexual relationship with Graham Kelly, her legislative director. Changes to the House of Representatives rules outlawed relationships between Congress members and staff.

In announcing her resignation – reported first by Politico – Hill confirmed an affair and apologized to her constituents and community. “For the mistakes made along the way and the people who have been hurt, I am so sorry, and I am learning – I am not a perfect person and never pretended to be.”

It is with a broken heart that today I announce my resignation from Congress. This is the hardest thing I have ever had to do, but I believe it is the best thing for my constituents, my community, and our country.

See my official statement below. pic.twitter.com/nG97RQIwvO

Hill admitted that during the “final tumultuous years of my abusive marriage, I became involved in a relationship” with someone on her campaign staff, without specifically naming that person or saying if that continued on into her term as a representative. “I know that even a consensual relationship with a subordinate is inappropriate,” Hill’s statement reads, “but I still allowed it to happen despite my better judgement.”

House Speaker Nancy Pelosi also released a statement thanking Hill for her service as “a leader of the Freshman Class” of newly elected progressive Representatives that began their terms this year. Pelosi also stated that “[Hill] has acknowledged errors in judgement that made her continued service….untenable.”

According to CNN, a conservative website released explicit and intimate photos of Hill. The representative contends that the pictures are a retaliatory measure made by her husband Kenny Heslep, who she is currently divorcing. In her statement, Hill once again reiterated that she would seek to find the people responsible for this breach of her privacy and bring them to justice.

In her 10 months as a Representative, Hill continued to champion causes that bought her popularity on the campaign trail in 2018 – homelessness and LGBTQ+ advocacy. She served on the House Armed Services Committee and as Vice Chair of the Committee on Oversight and Reform.

“To every girl and woman – to everyone who believes in this fight – this fight isn’t over,” Hill concluded her statement with, and tweeted from her non-House account.

To every girl and woman – to everyone who believes in this fight – this isn’t over. 💜💪🏼