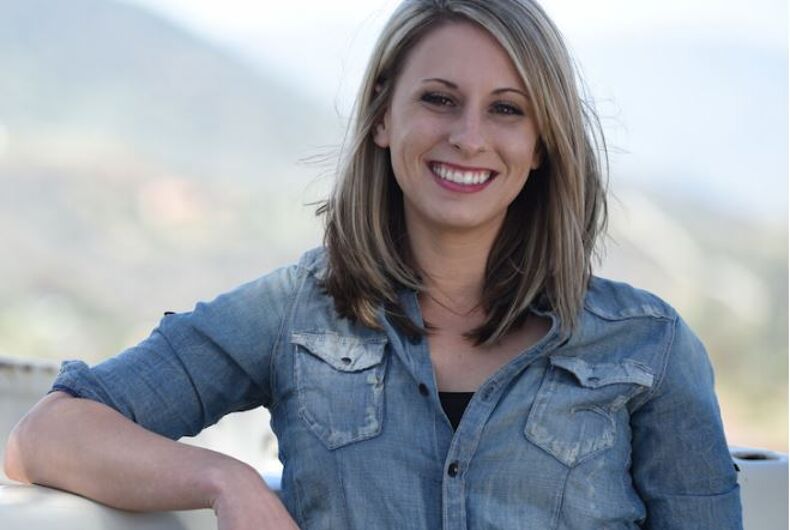 Congresswoman Katie Hill’s (D- CA) divorce from husband Kenny Heslep has turned nasty. Hill, the youngest LGBTQ person elected to the U.S. House of Representatives, is out as bisexual.

Explicit photos of the politician were leaked to the media along with copies of text messages documenting a throuple relationship Hill had with Heslep and a young former female campaign staffer. The photos show Hill and the former employee in intimate moments.

Related: Unseating most LGBTQ House members is an official priority for the GOP in 2020

Heslep has also accused Hill of having an affair with her male legislative director, Graham Kelly. She has denied that she has a relationship with Kelly.

“Allegations that I have been involved in a relationship with Mr. Kelly are absolutely false,” Hill said in a statement provided to the Washington Post. “I am saddened that the deeply personal matter of my divorce has been brought into public view and the vindictive claims of my ex have now involved the lives and reputations of unrelated parties.”

An aide to the Congresswoman confirmed that she has reached out to Speaker Nancy Pelosi’s office to deny the allegation. House ethics rules forbid legislators from having “a sexual relationship with any employee.”

But Republicans and rightwing news is having a field day over reports from Red State that the congresswoman was involved in a consensual three-way relationship with her husband and a former female campaign staffer. The site’s salacious reporting has included what appear to be legitimate screenshots of text messages between the three.

The texts detail a troubled relationship rife with accusations of manipulation, boundary issues, and revenge. The unnamed staffer describes the relationship as “toxic” in one screenshot while Heslep acknowledges the couple “abused” her in another.

Heslep reportedly released the screenshots and photos as revenge for what he claims is Hill’s infidelity with Kelly. In one exchange on Facebook he pushed back against someone who said Hill is a lesbian, saying she has “been sleeping with her (male) finance director for the past year at least.”

“I couldn’t dispute this if she was still holding to being bisexual,” he wrote. “But but [sic] being with her husband (me) for almost 15 years and then leaving me for another MAN, not woman, whom she is still seeing, is not her being a lesbian. Bisexual, yes, as I will back up her claims to this. But not a lesbian alone.”

Hill’s office told the Post that she contacted the Capitol Police after the photos were published without her permission.

“Intimate photos of me and another individual were published by Republican operatives on the internet without my consent,” Hill’s statement read. “The fact is I am going through a divorce from an abusive husband who seems determined to try to humiliate me. I am disgusted that my opponents would seek to exploit such a private matter for political gain.”

While House ethics rules forbid a member from having a relationship with a staffer, the code of conduct does not explicitly apply to campaigns. The Ethics Committee has, however, investigated past claims and determined it has jurisdiction over “misconduct relating to a successful campaign for election to the House.”

Should Black Christians continue to be forgiving?