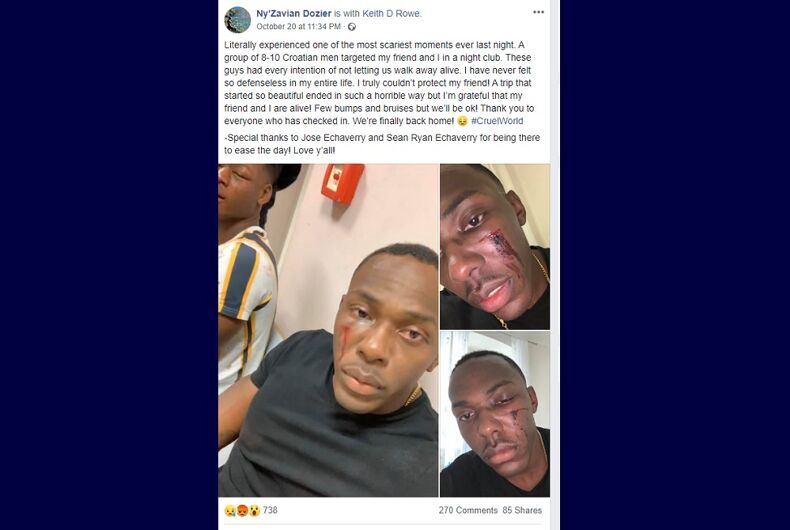 Ny’Zavian Dozier, 24, and Keith Rowe, 25, say that they were at the Opera nightclub in the city of Zadar.

Dozier posted on Facebook that it was “one of the most scariest moments ever.”

“There was one point when I believe there was a guy that had me in a headlock,” he added.

In an Instagram video, Rowe explained that at 3 a.m. this past Saturday night the pair “got jumped by 10 Croatian men and basically we were fighting for our lives.”

“These guys had every intention of not letting us walk away alive,” Dozier said. “I have never felt so defenseless in my entire life. I truly couldn’t protect my friend.”

Rowe said that a woman they met at the club came to help them after the mob dispersed.

“She is my angel, an amazing friend,” he said.

The two were taken to the hospital and treated for minor injuries.

Rowe and Dozier are in the U.S. Air Force, according to their social media accounts, and they are stationed in Germany. They were on vacation in Croatia – Zadar is known for its historic center and beaches.

A police spokesperson confirmed to Unilad that they received reports of the attack.

“Upon entering the field, it was determined that the men, American citizens ‘danced a little more vigorously’ and that annoyed these men who attacked them,” the spokesperson said.

The police said that they have not yet determined whether the attack was bias-motivated, and no arrests have been made.

But, according to the Voice of Croatia, local media is reporting that they were attacked because they “had been acting gay” and were seen “twerking.”

The U.S. embassy in Zagreb condemned the attack in a statement.

“The well-being and security of U.S. citizens abroad is one of the State Department’s top priorities. The Embassy is ready to provide appropriate assistance to American citizens in need and their families.”

Pijerino Bebić, the owner of the Opera Club, said, “I condemn any violence, we at the Opera have such a relationship that all our guests are welcomed and no one ever looks at skin color, religion or anything like that.”

He added that club staff attempted to intervene and called for help after the attack occurred.

Literally experienced one of the most scariest moments ever last night. A group of 8-10 Croatian men targeted my friend…

Was Congresswoman Katie Hill in a throuple relationship with a former campaign staffer?