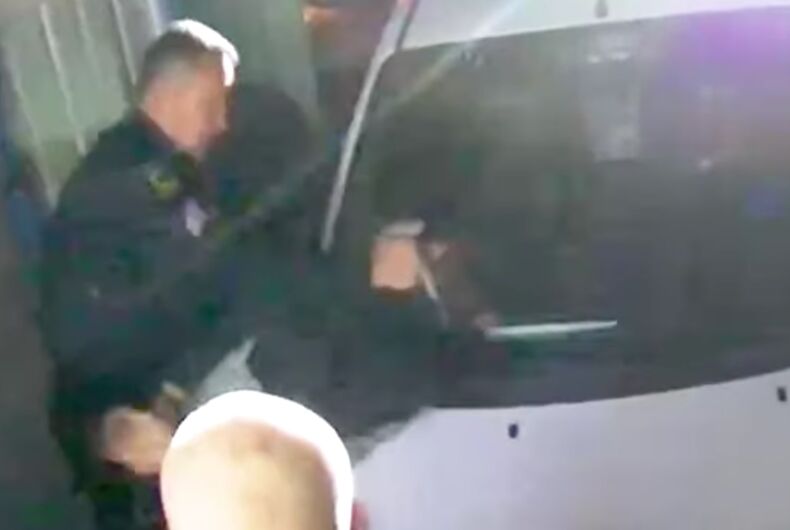 A California police officer was put on leave earlier this year after he was recorded hitting and berating a gay man. Now, he’s retired and receiving a pension of over a hundred thousand dollars a year.

Gustavo Alvarez filed a federal lawsuit against the Palo Alto Police Department this past April, alleging that several officers – including Sgt. Wayne Benitez – used excessive force when he was pulled over and arrested in February 2018.

The incident happened when Alvarez was being arrested for allegedly driving with a suspended license. Benitez and several other officers broke his door, arrested him, slammed him against a car and made him bleed. Benitez even threatened to make him bleed more if he continued to complain. He believes this happened partly because he is gay, as the officers made several homophobic comments about him during his arrest.

A judge later dropped the charges due to a lack of evidence, and after initially declining to release the video of the attack, Alvarez’s lawyers were able to release it in July of this year.

The arrest was caught on a disturbing video from a camera that Alvarez had set up in front of his house. This serves as the only video recording of the incident, as the officers had removed their body cameras and parked their cars facing away from his house to prevent being on tape from their dash cameras.

They still had on mics however, which recorded their homophobic comments.

Officer Christopher Conde was on patrol that day when he spotted Alvarez’s car. He knew that Alvarez had had his license suspended a month before, so he followed the vehicle, although he didn’t know if Alvarez was actually in the car.

Conde then went to Alvarez’s mobile home and approached him outside, telling him he was being arrested for driving without a license. When Alvarez asks the officer if he saw him driving, Conde admitted that he didn’t. Alvarez then decided to go into his home.

That’s when Conde called for backup and several officers, including Sgt. Benitez, arrive and order Alvarez out of his home. Despite telling the officers he was coming out, they broke down Alvarez’s door, dragged him outside and put him in cuffs. After the arrest, Benitez hit Alvarez and slammed him against his car’s windshield.

“You think you’re a tough guy now?” The sergeant asks Alvarez. After telling officers that he was bleeding, Benitez threatens him further, saying “You’re going to be bleeding a whole lot more.”

“See how well they behave when we put our foot down?” Benitez said to another officer after Alvarez was back in the squad car. “…That’s what we don’t do enough of.”

“He’s gay,” Benitez continued to another officer, who laughed and responded by called Alvarez a “frickin’ low life.” Benitez then called for Alvarez’s car to be towed away, when he continued making fun of Alvarez. He reenacts Alvarez’s arrest for the driver, raising his voice high to mock him, and mentions his sexuality.

Sgt. Benitez was placed on administrative leave by the department, but was still allowed to officially retire after 19 years on the force. He is now receiving a $9,866 monthly pension payout, part of his $118,600 a year retirement package, according to the California Public Employees’ Retirement System.

“Obviously the police department and the city of Palo Alto thus far have failed to step up and condemn the actions of these officers,” Alvarez’s attorney Cody Salfen told Mercury News. “To think that taxpayers are still rewarding him is incomprehensible at this point in time and history.”

“This speaks volumes to our claims that the agency suffers from a culture of violence, a culture of covering things up, a culture of failing to adhere to their constitutional duties as police officers to the point that they are breaking their own policies and therefore, the law,” Salfen said.

Alvarez’s suit also says that Benitez did not file a use of force report, even though he hit and slammed Alvarez against the car windshield.

“It’s disgusting and symptomatic of a department that tolerates its employees breaking the law,” he added.

He severely beat a trans woman. Now his lawyer has been thrown in jail too.