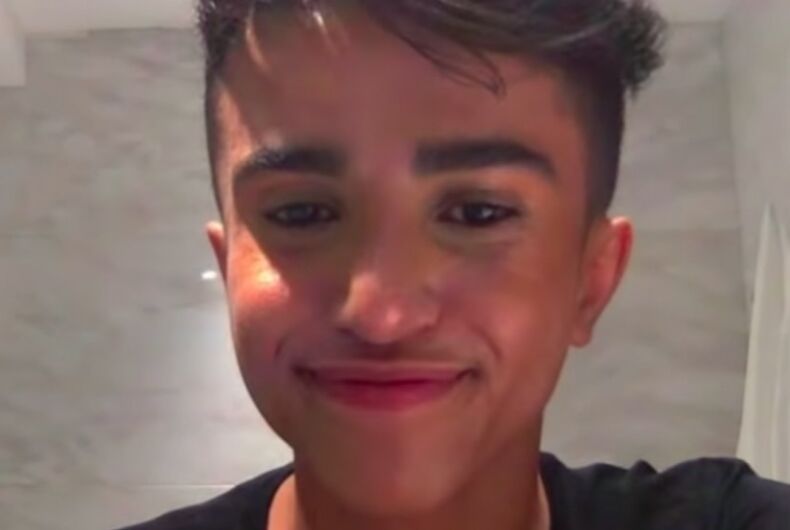 A gay 23-year-old Saudi Arabian YouTuber named Suhail al-Jameel says that he has been arrested for “sharing nudity online” and now faces prison time because he posted a picture of himself wearing leopard print swim shorts at a local beach.

His picture ran afoul of the country’s new public decency laws passed last September which explicitly forbid men from wearing shorts. It’s also against the law to be gay in Saudi Arabia, though its unclear if authorities targeted al-Jameel for his sexual orientation.

Al-Jameel reportedly has “over 170,000 Twitter followers and regularly posts make-up tutorials, fashion advice, and dance videos to his various social media platforms,” according to Queerty.

Here’s the image Al-Jameel shared on himself in shorts.

In a Snapchat message posted on Sunday, al-Jameel wrote:

I take a photo of myself wearing shorts at the beach and I go to jail for wearing shorts. Then the police change my charges to electronic crimes for sharing photos of nudity. How am I nude if I am wearing shorts on a hot beach?

This is a shame to say that in 2019 LGBTQ are not welcome in Saudi Arabia, you must live in secret and can’t live in peace. You want tourism but you won’t give us freedoms.

He then encouraged gay tourists to stay away from the country, writing, “There is no place for you here. It is illegal to be who you are and it is sad.”

Saudi Arabian authorities and other countries with anti-gay laws have a history of harassing and arresting known gay men under trumped up charges of drugs, pornography, indecency, and prostitution. Saudi Arabia also has laws forbidding media outlets from publishing any material supporting gay rights.