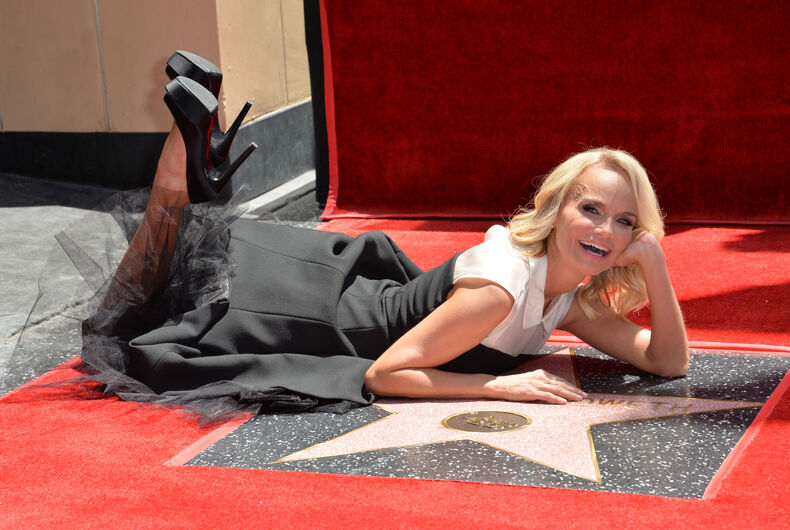 LGBTQ residents and allies in Mansfield, Texas — a town 34 miles southwest of Dallas — are in an uproar over three recent incidents: a hate group’s tweet shared by the town’s Chamber of Commerce, the local government scrubbing anti-discrimination language from its website, and a refusal by the school board to explicitly mention protections for LGBTQ students and faculty.

The timing of these developments seems particularly off, seeing as singer and LGBTQ ally Kristin Chenoweth is set to perform in an arts center owned by the Mansfield school district this Saturday.

Related: Queer and conservative students are clashing at a religious Texas university

On October 25, the Twitter account of Mansfield, Texas’ Chamber of Commerce posted a link from the American Family Association — an anti-LGBTQ hate group — urging people to boycott Target for promoting “a gay lifestyle” through its financial support of a pro-LGBTQ educational organization, according to the Fort Worth Star-Telegram.

At an October 22 Mansfield School Board meeting, Katie Hays, a local pastor and coordinator of the LGBTQ-allied Mansfield Equality Coalition, asked the school why sexual orientation and gender identity weren’t explicitly listed in the district’s anti-discrimination protections, unlike those listed on the City of Mansfield’s government website.

Shortly after the school board meeting however, the City of Mansfield’s government website scrubbed any mention of LGBTQ protections, says Rafael McDonnell, communications and advocacy manager for the Resource Center, Dallas’s local LGBTQ center.

The school board still hasn’t added the protections and has since claimed that LGBTQ people are already protected under its current policies forbidding sex discrimination. But seeing as that very issue is currently being deliberated by the U.S. Supreme Court, it’s easy to understand why queer people and allies want such protections explicitly written out.

One resident is trying to bring these issues to the attention of Kristin Chenoweth, an LGBTQ ally who is performing at a Mansfield Independent School District Arts Center this Saturday. So far Chenoweth hasn’t responded.

.@KChenoweth thought you’d be interested in this story at the school where you’re performing this weekend. They’ve been refusing to add these protections for 2 years—when the city added them, we brought that up, and the next day the city’s protections mysteriously disappeared. https://t.co/6XWZlgI8C7