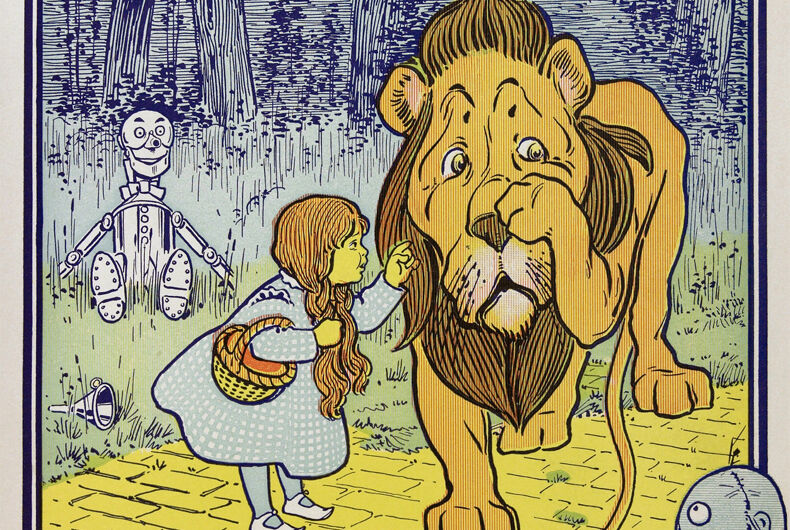 Errors in published histories, misreading, selective perception, willful historical fiction on the big screen, little screen, and web; alternative facts simply made up to suit various agendas; and the desire to believe what some wish to be true have created a constantly reverberating echo chamber of false knowledge which George Bernard Shaw warned “is more dangerous than ignorance.”

This post is an antidote for some of it.

Related: In 1919, the first pro-gay movie was made. A year later, it was banned.

The origin of “faggot”

“Faggot” as a male homosexual slur did not derive from burning gays at the stake. The word is English and did not evolve from another language. England hanged – but did not burn – gays at the stake as some other countries did. Its first known published gay connotation appeared in 1914’s A Vocabulary of Criminal Slang: “All the fagots (sissies) will be dressed in drag at the ball tonight.”

He was not “thrown out of the Continental Army for being gay” nor “being homosexual” nor “homosexuality” nor “for his sexual orientation” in 1778.

Those are states of being, and we know nothing of his sexual orientation. He was thrown out for same-sex behavior, but that doesn’t tell us his motivation. He could have simply been pursuing sexual release with another man because a woman wasn’t available as men in the military or prison or all-boys schools have for eternity.

But, contrary to ubiquitous assertions that behavior was not “sodomy.” He was charged with and found guilty of “attempting to commit sodomy.” While General George Washington’s secretary recorded the “abhorrence and detestation of such infamous crimes,” there was no reference to, let alone definition of, “sodomy” in the 5th Article 18th Section of the Articles of War which he was charged with violating.

Thus we have nothing to tell us which of the several things that accusation could have meant it actually did mean in this case.

Nor, contrary to assertions, was he “dishonorably discharged” because the term didn’t exist yet.

Nor, as often claimed, was “his sword broken over his head.” The diary entry of an eyewitness to his drumming out, Lt. James McMichael, mentioned only that “the coat of the delinquent was turned wrong side out.” The phrase “drumming out” used metaphorically today was literal then. The regiment’s drum and fife corps played while the condemned exited the camp.

Articles exist asserting that both Benjamin Franklin and General Washington unequivocally knew that German Maj. Gen. Frederich Wilhelm von Steuben was gay and that his hiring proved they were ahead-of-their-time Friends of the Gays. Some justify the assertion by referencing late author Randy Shilts and his lengthy study of gays in the American military, Conduct Unbecoming.

Actually Shilts wrote: “The acceptance of General Steuben and his contributions to the fledgling American military did not mean there was even tacit acceptance of homosexuality” by Franklin or Washington.

If they actually knew about his sexuality, his employment was still more a matter of war, like politics, making strange bedfellows, no pun intended. Nor, contrary to the misreading of documents of the time, was von Steuben fleeing possible prosecution in France but, rather, his native Germany.

Oscar Wilde was certainly a gay martyr, but he was not “a gay rights trailblazer” who “refused to deny his identity.” He denied it multiple times over three trials; repeatedly insisting that his attachment to the various men linked to him was not sexual but only “deep spiritual affection that is as pure as it is perfect.”

The first gay magazine in the world

Der Eigene, first published in Berlin in 1896, was not “the world’s first homosexual journal” nor was it initially a homosexual periodical at all. Originally it was an anarchist magazine, not becoming “EIN BLATT FÜR MÄNNLICHE KULTUR” (A Journal for Male Culture) until 1898. Along with articles and poems, apparently it was the first periodical to feature nude photographs of men intended for gay subscribers.

The first gay periodical was published by German Karl Heinrichs Ulrichs in 1870: Prometheus Beiträge zur Erforschung des Naturräthsels des Uranismus und zur Erörterung der sittlichen and gesellschaftlichen Interessen des Urningthums (Prometheus. Contributions to the investigation of the riddle of nature Uranismus and to the discussion of the moral and social interests of Urningthum). His hopes for subsequent issues failed for lack of adequate subscribers.

Claims that then-Assistant Secretary of the Navy Franklin Roosevelt’s June 1917 article in the Ladies’ Home Journal, “What the Navy Can Do for Your Boy,” was exploiting the public’s great “fear of homosexual influence on American young men” are contradicted by one of the article’s photos – a group of sailors on the U.S.S. Pennsylvania with the caption, “Your Boy Would Not be Lonely on a Battleship.”

Nor, contrary to persistent outraged claims, did Roosevelt “create” or “order” or “use his own staff for” the 1919 gay witch-hunt at Newport, Rhode Island’s, Naval Training Station.

Such assertions reveal the failure of the authors of such claims to carefully read Lawrence Murphy’s original research on the witch-hunt published in 1988 as Perverts by Official Order.

It was instigated at the Newport base by a pathologically homophobic but persuasive Chief Machinists Mate – not in Washington by Roosevelt – and had been going on nearly a month before Roosevelt was even told about it. Those in Newport did not need his permission but only approached his boss, Secretary of the Navy Josephus Daniels, because they needed funding to continue. Daniels was leaving on a trip to Europe and told Roosevelt to meet with them.

Yes, his subsequent support was homophobic, but his later adamant denials that he had not known, let alone approved, sailors being told to engage in gay sex to entrap their victims, Navy and civilian, is credible, particularly given he had tried unsuccessfully to get the Justice Department to take over the investigation.

As noted in my earlier article about Christine Jorgensen, Danish Girl Lili Ilse Elvenes/“Lili Elbe” was not “the first person to have gender confirmation surgery.” Her first operation in 1930 was supervised by legendary gay sexologist Dr. Magnus Hirschfeld in Berlin who had been involved in such surgeries since at least 1906.

Demonized for years as the “Jewish Apostle of Sodomy,” the mob attack on Hirschfeld that nearly killed him – some newspapers did report his death – happened in Munich in October 1920, not Berlin in May 1933 when a Nazi-affiliated youth group ransacked his Institute for Sexual Science.

Time and again one reads that the Institute and all of its contents were subsequently “burned” or “destroyed.” While most of the thousands of confiscated books, photos, and others items were burned, some of the materials were strangely held back and offered for sale through intermediaries back to Hirschfeld who was in Paris by then.

Further, anticipating such threats, his former lover Karl Giese had smuggled some of the most important documents out of the country.

Nor were all of the materials about homosexuality or gender identity. The Institute studied heterosexuality, too, and had a large medical practice for such things as contraception, infertility, and impotence. Nor was that the only book burning that day

A May 10, 1933, Associated Press article, along with several others, reported, “Proscribed volumes [were] collected all over Germany for public burning… blacklisted books from private as well as public libraries… of ungerman influences… All books of a socialistic, Jewish or Pacifist trend are especially marked for destruction.”

The authors the article specifically named whose works were included were Helen Keller and Albert Einstein, neither of which, to the best of my knowledge, were L or G or B or T.

“Beware of false knowledge; it is more dangerous than ignorance.” – George Bernard Shaw.