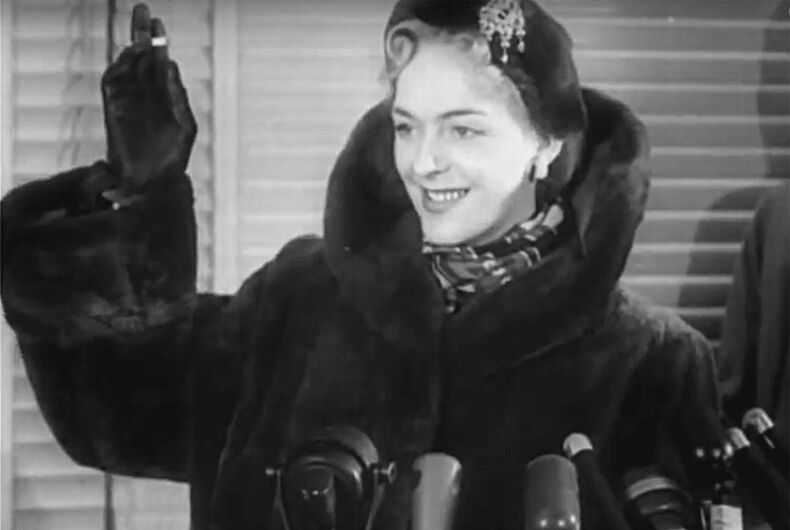 At 26, she – and the concept of identifying with a gender different than the one assigned at birth – exploded into public consciousness from newspaper articles in 1952. Further explosions followed in more papers, magazines, radio, TV, and movie theater newsreel coverage upon her return to the US in 1953 from Denmark where she had her initial surgery and spoke at the first-ever press conference for a transgender person.

Related: Did you know there is an outdoor museum of LGBTQ history?

She was not the first trans person to attract mainstream attention. The 1931 Danish biography of Lili Ilse Elvenes (aka Lili Elbe and the highly fictionalized The Danish Girl) was translated into several languages including English in 1933 as Man into woman: An authentic record of a change of sex / Lili Elbe. 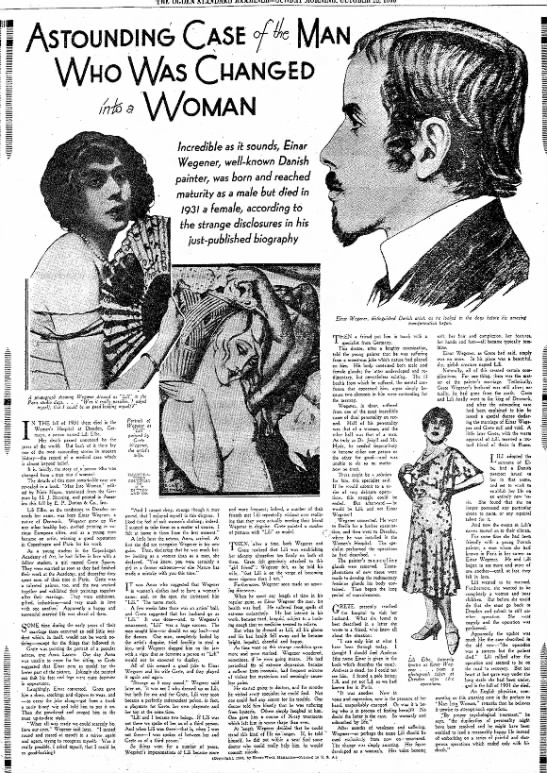 However, a search of newspapers.com‘s archive of 14,000+ mostly American newspapers reveals only about 20 contemporary articles about the posthumous release of Elvenes’ biography versus over 8,000 about Jorgensen between 1952 and 1957 alone.

Granted, no real comparison can be made because of Elvenes’ death and the fact that there were far fewer forms of media triggering each other than in 1931.

But another way to measure Jorgensen’s impact is to compare it with that of Caitlyn Jenner since the latter’s public transition four years ago.

Yet, over 60 years ago, when television was still in its infancy without “24-hour news,” when there was no Internet and its social media attention addiction factories, someone the public had never heard of jumped into their consciousness faster and higher than Jenner did in 2015 despite already being an Olympic Gold track and field legend and TV “reality” show star.

Of course, Jorgensen wasn’t the first to undergo gender affirmation procedures which date, in some form, to at least those of Karl Meir Baer in Germany in 1906.

Berlin doctor Magnus Hirscheld (1868 – 1935), a legend in LGBTQ history who would later be involved with Elvenes’ surgery, arranged for Baer’s surgery and wrote the epilogue of his autobiography, Aus eines Mannes Madchenjahre” / Memoirs of a Man’s Maiden Years. Baer had ambiguous genitalia, had been assigned “female,” but identified as male.

At times, Jorgensen claimed that doctors had confirmed that she was intersex, but there’s no record that they actually did.

Her prevarications took many forms; another example as revealed by biographer Richard F. Docter was her claim that she had never dressed in women’s clothes before her surgery while admitting privately that she had – an innocuous fact most trans women typically acknowledge.

Even after telling sexologist Vern Bullough that she had played a role in the press “discovering” her story in 1952, she insisted for years she hadn’t, eventually claiming she’d finally uncovered that a cousin had sold her story for $300.

Whatever her tendency toward factual embroidery and invention were, just like her occasional displays of ignorance about the human body the larger point is how much she contributed to progress in the acceptance of trans people by others and by themselves.

How “big” her story was can be measured not just in the swarm of “more than 50 newsreel, television, and still photographers” and “more than 350 admirers, autograph hounds, and just plain curious people” who showed up at the New York airport that chilly February morning upon her return to the states but also in the fact that the Hearst Corporation contacted her while she was still in Copenhagen’s Royal Hospital offering to pay her to tell her story to them for a series of five articles in their eleven newspapers.

[The year on the video is incorrect. As noted above her return was in 1953.]

In 2019 her 1952 fee from Hearst would amount to over $240,000. And virtually every other paper in the country was publishing articles about her; the Los Angeles Times running five stories in eleven days from “Former GI transformed into lovely woman in long series of treatments” to “Man changed to woman shuns Hollywood career.”

The San Francisco Examiner told readers, “Christine is not only a female; she’s a darn good looking female.” As acceptance by others of a trans woman today often unfairly remains in proportion to how well she passes for “female,” in the 1950s it was the first question – after “how do doctors do it?”

Some printed comments said she had “unladylike” big hands, a “husky voice,” and “flat chest.” But most were dazzled by her chic “feminine” verisimilitude along with her self-confidence and charm which disarmed many a would-be critic.

There were many who wondered about her “mysterious sexual change” even as their minds were opened to acceptance by her effortless charisma.

Readers learned she’d arrived with 13 pieces of luggage, her shoe size was 9-AA, her first beverage back in America was a Bloody Mary containing two shots of vodka and tomato juice, where she went after leaving the airport: “the swank Carlyle Hotel” in Manhattan, and that her parents were extraordinarily supportive given the era.

“CHRIS HIT THE ROAD. Christine Jorgensen, the gal who used to be a guy, flashes confident grin as she take wheel for driving license test in Garden City. Motor vehicle inspector who tested Chris passed her after she had handled the car 20 minutes. He called her a good driver.” – New York Daily News.

Newsday: “She, then he, had once been employed as a chauffeur. But her license had expired and so, said one wag, had the sex of the owner.”

Nonetheless, she got the new license identifying her as female.

The paper later reported on “Her first Easter bonnet” on their front page, the kind of air-kiss attention only Long Island’s society matrons usually got.

She was one United States Army veteran they did not want troops reading about. 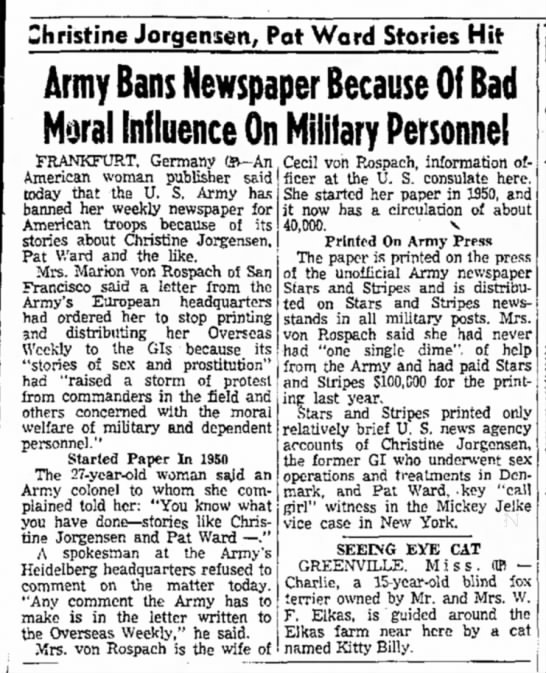 In June 1953, the wire services were buzzing again upon learning (probably tipped off by her) that she had met with the one sex celebrity more famous than she: Indiana University’s Dr. Alfred Kinsey in little Bloomington, Indiana, as they breathlessly waited for the September release of his next blockbuster Sexual Behavior in the Human Female.

Kinsey biographer Jonathan Gathorne-Hardy quoted someone recalling that, “When she appeared at the local cinema there was nearly a riot.”

Some reporters continued to insist on referring to her as “he” and/or challenged her identity in other ways.

One headline read: “DR. KINSEY GETS CHRISTINE’S REPORT; POSES NEW PROBLEM FOR FACT-FINDING MEDICO”—i.e., would he file her sex history with his data on males or his data on females?

But Kinsey’s secretary told reporters: “We never give any information about anyone from whom we take case histories.” Nor were they told that Jorgensen allowed herself to be physically examined at Kinsey’s request by his son-in-law, Dr. Bob Reid.

A song about her was released by The Charmer aka Calypso Gene. [Readers might know him better in his current incarnation as Minister of the “Nation of Islam” Louis Farrakhan.]

“When he-she came back to this country,
They made her a popular celebrity.
All the public sentiment
She got movie contracts and plenty engagements.
People came out of curiosity
To see this amazing freak of the century,
But behind that lipstick, rouge, and paint,
I still wonder, is she is, or is she ain’t?”

A transphobic Pittsburg Courier columnist wove her into the aftermath of the Korean War: “GI’S HAVE NAME FOR CHRISTINE. GIs stationed at Musan, Korea, voted Christine Jorgensen ‘Miss Neutral Zone of 1953.’”

She became popular on the show business and social scenes on both coasts, and was crowned Woman of the Year by the Scandinavian Society in New York.

Another columnist, Dorothy Kilgallen, wrote in one 1958 column that her “record album ‘Telling All’ is getting big play at Greenwich Village parties,” and in another: “Christine Jorgensen’s well-kept secret at Arthur Blake’s Café Bohemia party was the name of her boyfriend. She simply didn’t introduce him to anyone.”

Columnist Earl Wilson often mentioned her, wondering in January 1958 if she’d accepted an invitation yet to a “Come as you were in 1948” party, noting that December that she’d received a blue mink coat from “a socialite admirer,” and demonstrated his transphobia and poor math skills the same month with: “Christine Jorgensen’s marking his fourth birthday – as a ‘girl’.”

She made headlines again in 1959 when she sought, but was denied, a license to marry a man because, whatever her driver’s license said, her birth certificate said she was a male. She later said she’d chosen not to marry.

Books were written about her, and she wrote one herself, telling of her years of confusion and depression, trying to find someone who would help her become herself.

In addition to albums, over the years she appeared in a nightclub act and plays, endorsed a biopic, and was popular on the lecture circuit.

In 1970, three years before his resignation after a corruption scandal, loathsome Republican Vice President Spiro Agnew refused to apologize for characterizing a political critic as “the Christine Jorgensen of the Republican Party.”

One of her lectures was delivered at UCLA in 1972 after painfully uninformed remarks by the person who introduced her. Jorgensen misspoke herself a bit, e.g., repeating a myth about a correlation between extra male chromosomes and violence.

Years after Kinsey’s death, she returned to the Indiana University campus in 1973 for a well-attended speech about her life. “CHRISTINE JORGENSEN WHOSE SEX CHANGE SHOCKED OUR WORLD,” Indiana Daily Student March 26, 1973.

An interview toward the end of her life.

Her story led to a huge increase in self-understanding and acceptance among other trans people. She and her doctors received hundreds of letters asking for more information and help, and she participated in numerous panel discussions and conferences.

The growth in gender identity research and opportunities for a variety of gender confirmation protocols, including the opening in 1966 of the first gender identity clinic offering surgery in the US at Johns Hopkins Medical Center in Baltimore can be traced to her. Over the next decade or so more than 40 others would open.

She also advocated for gay equality and supported AIDS charities. Her early understanding of the challenges shared by both gay and trans people was reflected in a letter to the doctor in New Jersey who was the first to tell her about the possibility for surgery in Europe and his wife that she wrote from Denmark sometime before her first appointment with the doctor there who ultimately supervised her transition, and when letters were still signed “George.”

“I read The Well of Loneliness not long ago. It made me for determined than ever to fight for this victory. The answer to this problem must not lie in sleeping pills and suicides that look like accidents, or in jail sentences, but rather in life and the freedom to live it.”

Many years later she would tell interviewers: “We didn’t start the sexual revolution but I think we gave it a good kick in the pants!

Thirty-seven years after first kicking the world in the pants, Christine Jorgensen died of cancer at 62 in May of 1989. Per her request, instead of a funeral there was a party.

Then, her two beloved nieces, a close male friend, and her trans woman roommate “held hands and cried together as they waded into the frothy, cool Pacific Ocean in the afterglow of a shimmering, golden sunset. Standing in the surf, in semi-darkness, they sprinkled her ashes into the sea.”

“As they turned and walked to their car they could hear children on the beach, laughing and playing in the cooling sand.”

The children likely had the same look of joy on their faces that Christine had when she walked down the steps of that airplane in 1953, coming home for the first time in every way.

Once, after an interviewer complimented her, she replied: “At least, I’m me.”

She’s memorialized along Chicago’s outdoor museum of LGBT history, the Legacy Walk, in its traveling exhibit iteration, the Legacy Wall, and the Legacy Project Education Initiative for Public Schools. 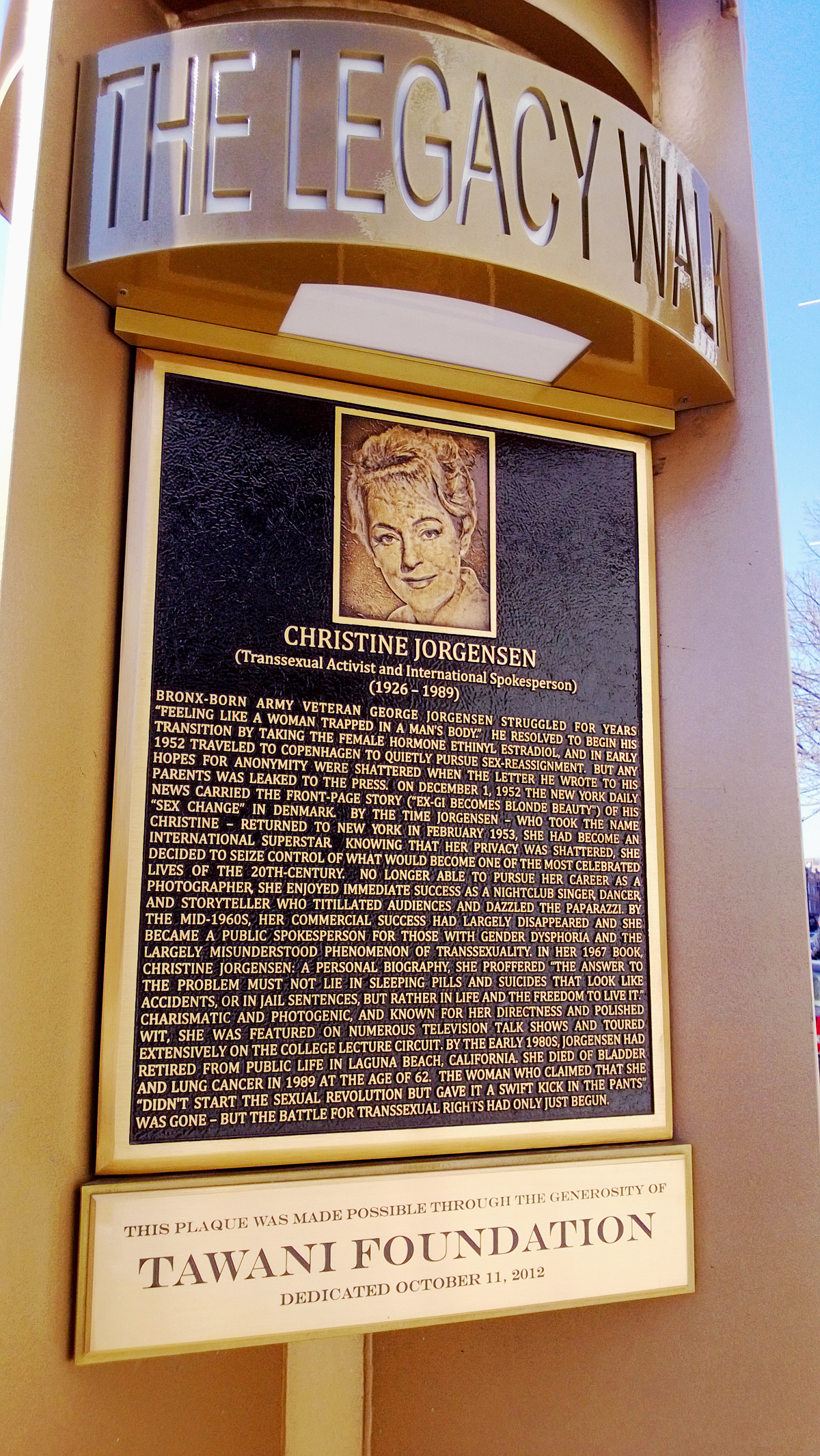