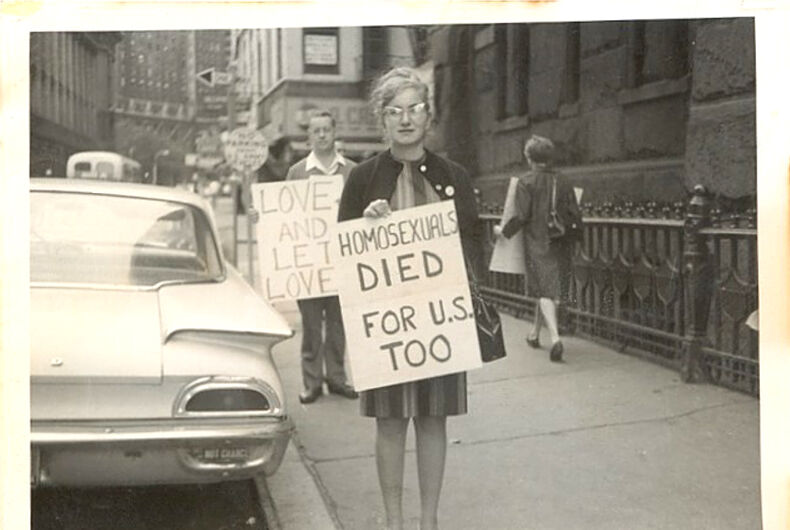 The actual number in 1964 was higher but unknowable due to poor record keeping. The 2,417 did not include all types of discharges, all the officers discharged, or any numbers from the Coast Guard.

On September 19, 1964, the world’s first organized gay rights protest was held in front of the Army Building on Whitehall Street in Manhattan to protest the ban on gays in the military, Less Than Honorable discharges, and sharing of gay people’s private information outside of the Department of Defense.

That was not just five years before Stonewall, but also 30 years before its codification into Don’t Ask, Don’t Tell took effect, and nearly half-a-century before it would end.

The few participants, gay, bi, and straight, were variously members of the Homosexual League of New York (HLNY), Mattachine Society of New York (MSNY), Daughters of Bilitis (DOB), and the New York City League for Sexual Freedom (NYLSF). Four would go on to make other major contributions to our history. 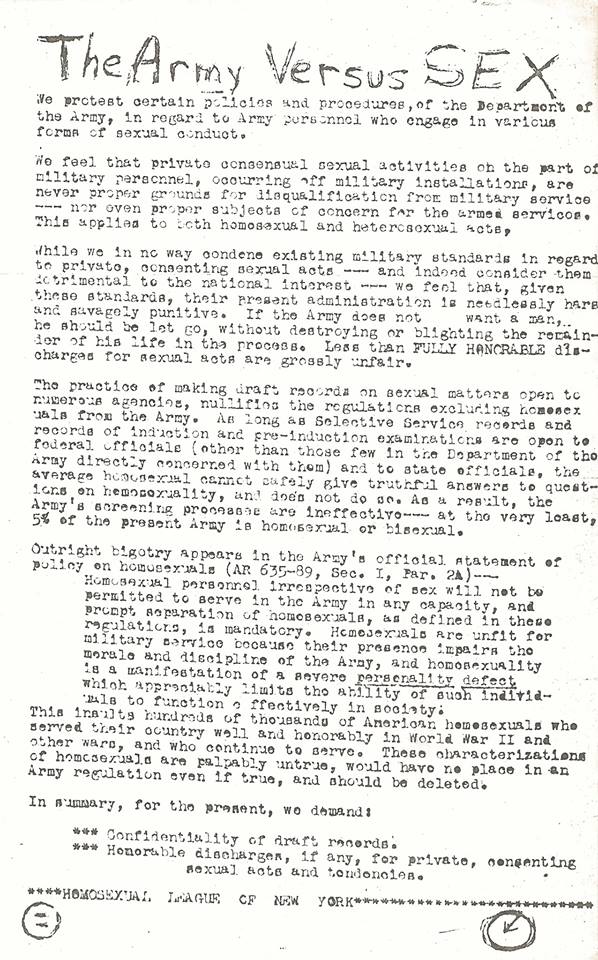 One of the leaders was 26-yr. old Randy Wicker, carrying the “ARMY INVADES SEXUAL PRIVACY” sign. He had come to gay activism very early by those days’ standards – in 1958, at the age of 20, in between semesters at the University of Texas where he would become famous for fighting censorship and student fee hikes. First traveling to, then settling in New York City, he shook up the still nascent movement there by urging them to become more public and more aggressive.

In 1962, seven years before Stonewall, in response to a New York radio program featuring psychiatrists saying homosexuals were sick but curable, he demanded the station give equal time to actual gays.

The 90-minute program with him and seven others was the first positive on-air discussion of gays on the East Coast, and reported on by The New York Times and Newsweek, just some of the mainstream publications he was the first to convince to write more about the movement.

The same year, he created the largely on-paper-only Homosexual League of New York in 1962 because MSNY did not then support direct action. Before anyone else, he had matchbooks made with gay rights messages on them, and buttons that read, “Equality for Homosexuals.”

By 1963, he was already under surveillance by the FBI who recorded that he was promoting a protest at the White House; two years before one finally occurred. At least one straight magazine was calling him the Martin Luther King of the homosexual rights movement while some gays belittled him as “Miss Mattachine.”

One told him, “We don’t want people to know we [look like] everybody else. As long as they think everyone’s a screaming queen with eyelashes, we’re safe. We’re not suspected. We don’t want publicity.”

Another said at a social event sponsored by MSNY: “How can we expect the police to allow us to congregate? Let’s face it; we’re criminals, You can’t allow criminals to congregate.” To which Randy replied: “Why do I have to sit here and listen to idiots like you say things like that? You’ve let society brainwash you!”

Months before the Whitehall protest, he became the first out gay person to appear on East Coast television, and three months after led the second-ever protest; picketing a lecture called “Homosexuality: A Disease” by a psychoanalyst at New York’s Cooper Union, demanding and receiving ten minutes of rebuttal time.

By that September, 23-yr. old Craig Rodwell, below, had spent time in jail on trumped-up antigay charges, been beaten by police, and had a passionate love affair with Harvey Milk. He had also survived a suicide attempt after the then-Republican, deeply closeted Milk dumped him, in part because he was frightened of how out Rodwell was.

He would help organize many other early protests, is credited with suggesting the annual July 4th pickets of Independence Hall in Philadelphia, founded the first gay youth group in 1967, Homophile Youth Movement in Neighborhoods (HYMN), the same year he opened Oscar Wilde Memorial Bookshop, the first gay bookstore, and was one of those who suggested an annual Stonewall anniversary celebration which became Pride.

Lovers Nancy Garden, 26 (in photo below behind NYLSF member Jack Diether) and Renée Cafiero, 20, were both active in MSNY and the Daughters of Bilitis, the first lesbian group in the United States. Garden worked on MSNY’s newsletter and a pamphlet with advice if one was arrested. Cafiero worked with Rodwell on his Young Adults Committee.

Both women helped him prepare the bookstore for its opening. Garden told Betsy Kuhn, author of Gay Power!, that the store was “a goldmine. What heaven to be able to browse in a shop that specialized in gay books, magazines, newspapers, etc. Suddenly to have our classics and new works available in one friendly, safe place was a terrific gift.”

Becoming a successful writer of books for children and young adults, her best known work was the award-winning 1982 novel Annie on My Mind about the relationship between two 17-year-old New York City girls, Annie and Liza. Its use in public schools has been frequently challenged, and copies were publicly burned in Kansas City in 1993.

In 1995, the Olathe, Kansas, School District lost some $160,000 they had spent defending a lawsuit challenging their having removed the book from a high school library. The judge ruled that it was an unconstitutional attempt to “prescribe what shall be orthodox in politics, nationalism, religion, or other matters of opinion.”

Cafiero, below in front of NYLSF’s bisexual founder Jefferson Poland and Dieter, became a children’s books editor, working for HarperCollins for decades. She was a cofounder of the Gay Alliance of Brooklyn, and very active in union organizing, helping draft the language of the sexual orientation nondiscrimination clause in United Auto Workers contracts. Also heavily involved in the Democratic Party, she made history again in 1972 as one of the first out gay delegates to their annual convention.

Army Regulation (AR) 635-89, referred to on some of their picket signs, generally held that “personnel who voluntarily engage in homosexual acts, irrespective of sex, will not be permitted to serve in the Army in any capacity, and their prompt separation is mandatory. Homosexuality is a manifestation of a severe personality defect which appreciably limits the ability of such individuals to function effectively in a military environment.”

It divided homosexuals into three classes. Class I was for those who had engaged in same sex acts “involving force, fraud, intimidation, or a minor,” and required a general court martial leading to a possible prison term and a Dishonorable discharge. Class IIs were those who had engaged in or attempted to engage in consenting same sex acts. Class IIIs were those who had “exhibited, professed, or admitted homosexual tendencies but had not committed any provable acts or offenses [within] military jurisdiction.”

Class IIs could receive an Honorable or General discharge “if the individual concerned disclosed his homosexual tendencies upon entering the service, or had performed outstanding or heroic service, or had performed service over an extended period and it would be in the best interests of the service.” After 1958, Honorable discharges were supposed to be mandatory for Class IIIs but compliance varied.

Garden said, “It was a nasty, rainy day. We were very nervous – okay, scared – for we had no idea what to expect.”

As it turned out, they had no trouble at all. “Not too many people were outside, given the weather, and Whitehall Street on a weekend wasn’t exactly a hotbed of activity anyway.”

Afterward, Rodwell and the two women went to a restaurant to warm up.

“We felt a little let down because it had been so uneventful,” Garden said, “but also triumphant, since we’d actually done it!”