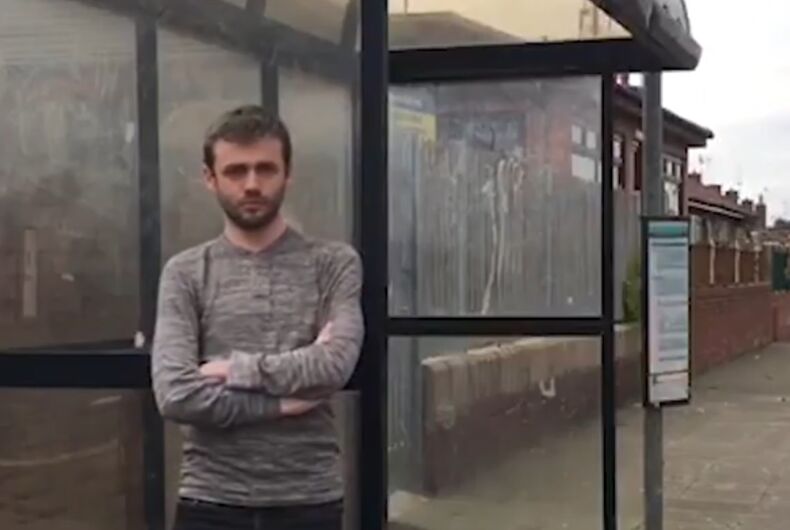 Callum Hall, 22, says that he was offended when his local bus company offered him two free tickets to make up for another passenger threatening to burn him alive and using anti-gay slurs last June.

Hall, who was traveling home in Peterlee, England, told Chronicle Live that when three passengers boarded the bus in June, and one commented that they could tell Hall was gay.

Related: Watch this woman get her comeuppance when she goes on antigay rant on a city bus

When one of the three passengers asked who was gay, one of his travel mates replied loudly, “Him there, the fucking faggot with his legs crossed — you can tell he’s a poof.”

Hall then reportedly confronted the three passengers to ask if they had a problem. One of the men responded, “Your kind should be dead or burned alive.”

Hall then got into an argument with the three people, something which he said was out of character for himself.

After the argument, Hall says, “I went the bus driver to apologize when they got off and he just wasn’t interested. I didn’t feel safe on the bus, it could have ended up physical but the driver did nothing.”

When Hall later complained to the bus company Arriva, which operates local bus systems throughout Europe. Arriva said it had spoken to the driver and then offered Hall two free tickets, an offer which offended Hall. Hall explains why:

I didn’t raise this with them because I wanted free bus tickets, I wanted them to acknowledge the problem. I’m an out, confident gay man and, although I was bullied at school, I’ve never experienced that sort of abuse anywhere as an adult. The fact this was allowed to happen on an Arriva bus and my concerns weren’t addressed for weeks is shocking. Something needs to change so people like me can get on their buses and feel safe.

A company spokesperson has since apologized for Hall’s experience and said the company is conducting a “full internal organization” to determine what happened.

Ellen is so desperate to move past George W. Bush criticism that she kissed Howard Stern