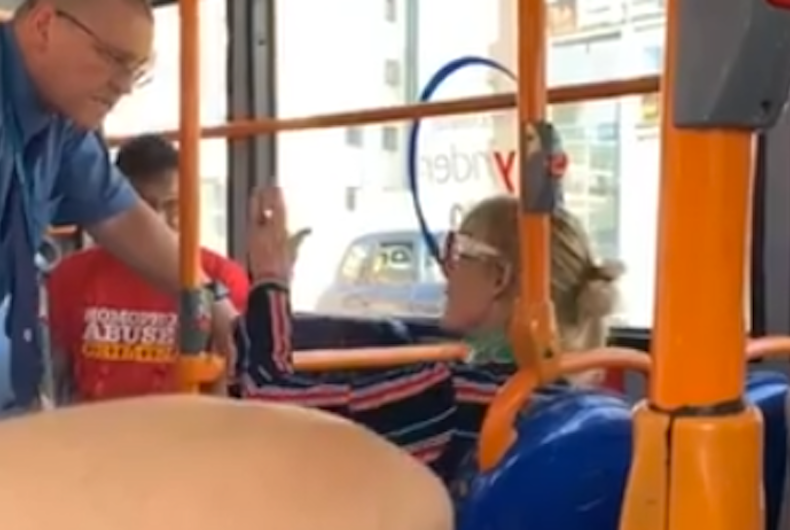 When a woman decided to berate a gay man on the city bus on Pride weekend, she likely didn’t expect that her fellow passengers would spring to the man’s defense.

Passenger Karina Townsley shared video of the encounter after she left the bus with her seven year-old daughter in tow. The child had a pride flag painted on her face.

The man was chatting with other passengers about his day at Manchester Pride when the woman interrupted to berate him and yell slurs. He was wearing a shirt that said “Homophobic abuse is criminal.”

“You are a man, you are the son of your father. Where is your father?” the woman bellows before calling him vulgar names.

And that’s when the bus driver steps in to tell the lady to pipe down and watch her language – and another passenger tells her she’s being “nasty for no reason.”

“You have the freedom to be who you want to be,” the man tells her. “We can all be who we want to be, especially this weekend.”

“The man was talking to people about how he had put a red bow on a policeman, which raises awareness for HIV,” Townsley, who identifies as bisexual, told the Manchester Evening News. “It was a dead good atmosphere but then the woman started abusing him.

“She asked why he was gay, asking if he had been sexually abused. He was trying to ignore the abuse. Everyone was disgusted.”

“When I got off the bus with my daughter she was screaming and swearing at the bus driver,” Townsley said. “I thought, ‘I can’t be bothered listening to this’ and got off. My daughter was shaking, she isn’t used to conflict.”

“I thought the most shocking thing was that he was just sitting there taking it. It was like he was used to it.”

A gay man got a death threat when he flew a rainbow flag. His neighbors’ reaction is amazing.