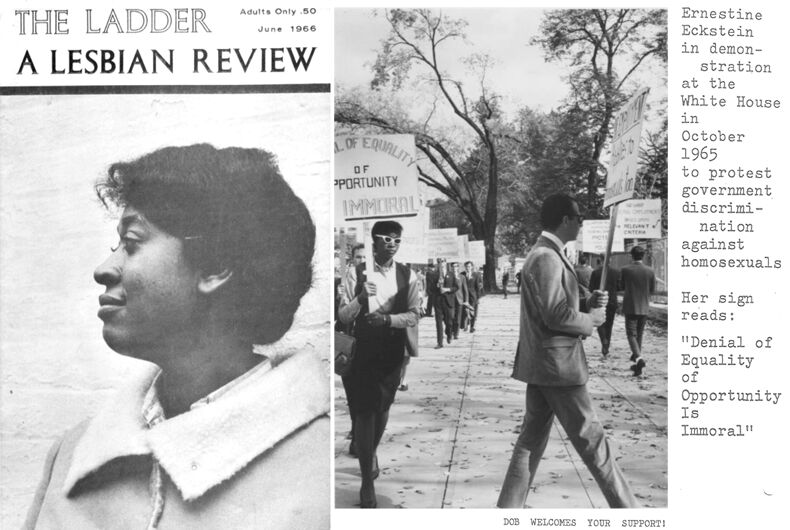 Photo: The Ladder Front & Back Covers

Ernestine Delois Eppenger was born in South Bend, Indiana, one of eight children of Darnell and Cecelia Eppenger. When she was attending Indiana University (IU) in the early 1960s, she had no idea that after earning her BA in journalism with a minor in government and Russian in 1963 and moving to New York City she would become one of the very few lesbians of color known to have been publicly involved in the early gay rights movement.

In fact, she hadn’t yet recognized she was a lesbian.

Along with other recipients of a residence scholarship requiring two hours of work a week in the dormitory and at least 10 other hours a week in some other capacity on campus, she lived in Pine Hall in Trees Center, for which she was Inter-Residence Halls Association representative.

She was a member of Tomahawk, a scholastic honorary, wrote for the Indiana Daily Student, and was in Singing Hoosiers. She was also a member of Bloomington NAACP.

In New York, she got a job as a social worker, joined the Congress for Racial Equality (CORE), and began to accept her attraction to women.

Most of what’s known about her comes from a long interview with editor Barbara Gittings and her partner and assistant editor and photographer Kay Tobin Lahusen that was published in the June 1966 issue of Daughters of Bilitis magazine The Ladder in which she used the name Ernestine Eckstein.

Did you know when you came here that you were a lesbian?

No, I didn’t. I had been attracted to various teachers and girlfriends, but nothing ever came of it.

Did you know there were homosexuals in college?

It’s very hard to explain this, but I had never known about homosexuality, I’d never thought about it, it’s funny, because I’d always had a very strong attraction to women. But I’d never known anyone who was homosexual, not in grade school or high school or in college. Never heard the word mentioned. And I wasn’t a dumb kid, you know, but this was a kind of blank that had never been filled in by anything – reading, experience, anything – until after I came to New York when I was twenty-two. I look back and I wonder’. I didn’t know there were other people who felt the same way I did.

What did you used to think about your uniqueness, how did it affect you?

I used to think, “Well, now, what’s wrong with me?” But at the same time I felt there was nothing unusual about people loving other people regardless of sex. I’ve always believed that love transcends any kind of label–black, white, woman, man. So I didn’t think it was unnatural for me to have reactions to other women. Why not? However, I’d never thought about sexual activities between those of the same sex.

What happened after you came to New York?

Well, as a matter of fact, I had a college friend who had come here earlier. He was my best friend in college. It wasn’t a sexual relationship, never even a romantic one. Very platonic. And he was a homosexual, but I didn’t know it then, he didn’t tell me. Anyway, we had a very good relationship going in college. We could do everything together, really communicate. Just the best of friends. And I liked it that way and so did he. I never understood why – but I never questioned why either. So when I came to New York he was one of the first persons I looked up. And he said, “Ah . . . Ernestine, you know I’m gay?” And I thought: well, you’re happy, so what? I didn’t know the term gay. And he explained it to me.

Then all of a sudden things began to click. Because at that time I was sort of attracted to my roommate, and I thought: am I sexually as well as emotionally attracted to her? And it dawned on me that I was. And so my college friend sort of introduced me to the homosexual community he knew. Still, I went through the soul-searching bit for several months, trying to decide if I was homosexual, where I stood.

But then having once decided, the next thing on the agenda was to find a way of being in the homosexual movement – because I assumed there was such a movement, or should be. And at that time I saw the New York Mattachine ads in the Village Voice.

Do you think that because you were accustomed to thinking of the Negro movement with its organizations, you automatically felt that homosexuals would have organizations?

Yes, that was a definite influence.

“We must demand our rights boldly, not beg cringingly for mere privileges, and not be satisfied with crumbs tossed to us.” – Frank Kameny, cofounder Mattachine Society of Washington

At 24, it wasn’t just her color or relative youth that made Ernestine unique when she joined some 40 others at the first Annual Reminder picket at Independence Hall in Philadelphia on July 4th, 1965. Most gays at the time, it seems, opposed public protest. 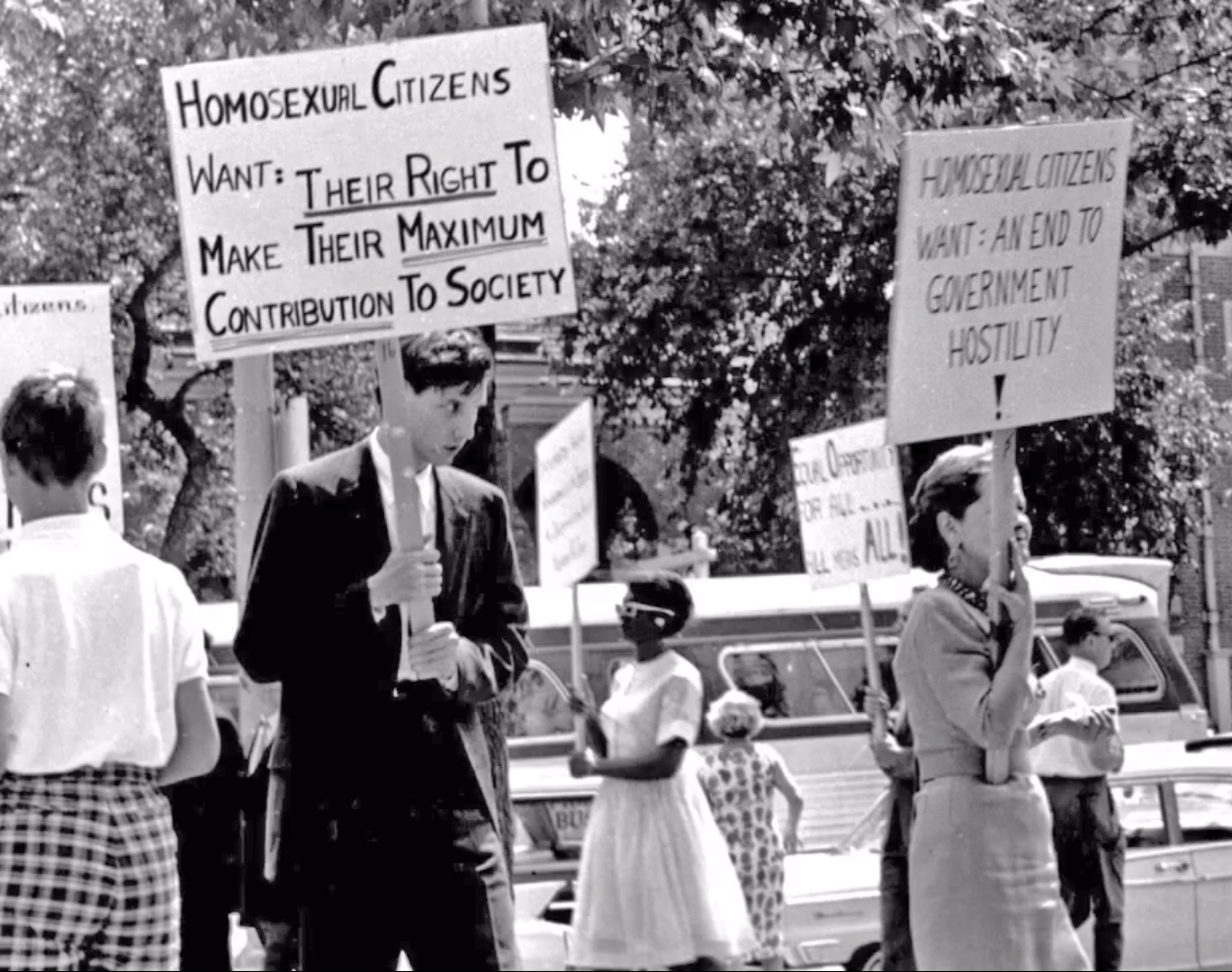 The then-editor of ONE magazine criticized such demonstrations as well as media appearances by gays. Then-deeply closeted Washington Post reporter Leroy Aarons later told Ed Alwood, author of Straight News: “I thought they must be totally reckless or weird – using their names and talking to reporters for quote. My second thought was what does this have to do with me? I had my job, I had my gay life, and I had my straight life. I had totally compartmentalized my life and I didn’t like those elements of my life getting confused.”

And “L.D.” who had been denied a State Department job because he was gay told David Johnson, author of The Lavender Scare, “We were alarmed by them; wouldn’t touch them with a ten-foot pole.”

It wasn’t just people deep in the public closet and outside the movement. As gay historian John D’Emilio and others have documented, in the summer of 1965 the national board of Daughters of Bilitis withdrew from the East Coast Homophile Organizations (ECHO) coalition because of the latter’s endorsement of such demonstrations.

But Ernestine was one of 45 people who participated in the third picket in 1965 of the White House on October 23rd; and not, as some have claimed, the only woman.

Later in the interview:

Have you found any discrimination against Negroes in the homophile movement?

My feeling is that there are certain broad, general problems that we all have as homosexuals, across the board, so to speak, and we should concentrate on those – the discrimination by the government in employment and military service, the laws used against homosexuals, the reject by the churches. The homosexual has to call attention to the fact that he’s been unjustly acted upon on. This is what the Negro did. Demonstrations, as far as I’m concerned, are one of the very first steps toward changing society. I would like to see in the homophile movement more people who can think. And I don’t believe we ought to look at their titles or at their sexual orientation. Movements should be intended, I feel, to erase labels, whether ‘black’ or ‘white’ or ‘homosexual’ or ‘heterosexual’. I’d like to find a way of getting all classes of homosexuals involved together in the movement.

The entire interview is worth reading. Much of it involves a discussion of the differences and similarities between the black and gay civil rights movements about which she made several insightful observations that were remarkable given her youth and having been a part of the gay movement and the gay world itself for such a short period of time.

However this had led some to employ the Magical Negro trope, suggesting that the idea for the first gay rights protests came from her when by the time she became involved, simply as a participant, there had already been at least seven. Her contributions to the movement stand on their own; they don’t need hagiography.

She was elected vice president of the New York chapter of the Daughters of Bilitis where she encouraged greater participation in the movement’s growing militancy but within a couple of years she left the group and moved to California. Barbara and Kay said she was “tired of all the personal issues – she wanted a more political organization.”

Sadly, little is currently known about the rest of her life other than that she joined San Francisco’s Black Women Organized for Action whose mission statement declared: “We are for Action, because we believe that the time for rhetoric is past; that the skills of Black women can best be put to use in a variety of ways to change the society; that, in the political work in which we live, involvement for Black women must go beyond the traditional fundraising and into the full gamut of activities that make up the political process which affects our lives in so many ways.”

She died at 51 in 1992 of unknown causes leaving behind a brilliant smile, people who loved her, and a history-making display of courage no one should ever forget.