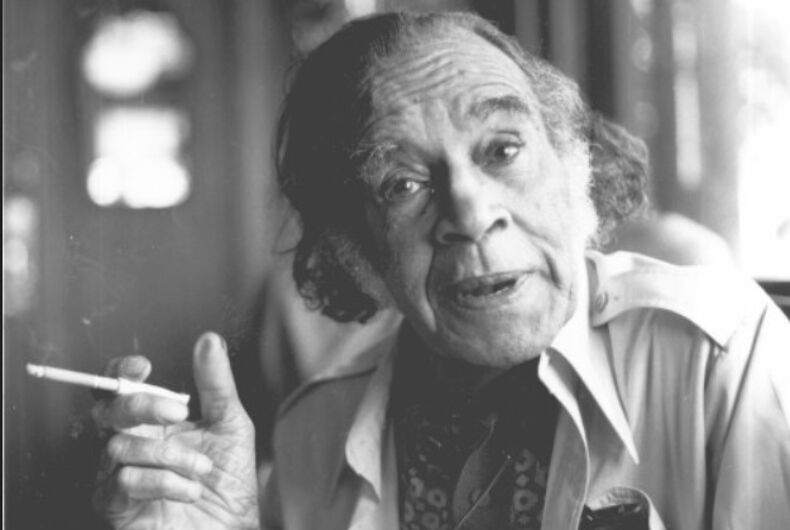 A visual artist and writer, Richard Bruce Nugent was a pioneer of black gay literature.

Born in Washington, DC, in 1906, Nugent moved to New York with his mother following the death of his father.

While he worked at various odd jobs, Nugent indulged his passion for art and declared his intent to concentrate full time on his art to his mother, who promptly shipped him back to Washington to live with his grandparents.

Undeterred, Nugent became acquainted with Langston Hughes and Alain Locke through his friendship with poet Georgia Douglas Johnson. Both men would publish Nugent’s writing, introducing him into the canon of Harlem Renaissance literature.

In 1925, Nugent May bed back to New York, where he soon met other Harlem Renaissance artists. He lived with writer Wallace Thurman from 1926 to 1928, and contributed to the groundbreaking literary journal FIRE!!

Related: This gay sculptor focused on black male beauty during the Harlem Renaissance

The only issue of the African American arts journal contained a short story by Nugent, “Smoke, Lilies, and Jade.” Many scholars consider it the first literary work with openly gay themes by an African American writer.

Nugent continued to write and publish under the pseudonym Richard Bruce to avoid the disapproval of his family.

Described as a ”bizarre and eccentric vagabond poet,” he was a key figure in the Harlem Renaissance. Nugent’s open homosexuality and unique personal style helped him stand out.

After FIRE!!, Nugent joined the cast of Du Bose Heyward’s 1927 stage play, Porgy, and toured the United States and Europe for more than two years.

During this time he also carried on a brief affair with gay African American sculptor Richard Barthé. He also appeared in Run, Little Chillun in 1933 and joined the Federal Writers’ and Art Project as well as the Federal Theatre in the 1930s.

Along with his writing, many of Nugent’s illustrations were featured in literary journals. In 1931, the Harlem Foundation featured four of his paintings in its exhibition of African American artists.

In 1945, Warren Marr II issued Nugent’s only standalone publication, Beyond Where the Stars Stood Still, in a limited edition. In 1952, Nugent married Marr’s sister Grace. The union lasted until Grace’s death in 1969.

Nugent’s intentions during the marriage were unclear, as he was always open about his interest in other men, even during his marriage. Thomas Wirth, a personal friend of Nugent, wrote in Gay Rebel of the Harlem Renaissance that Grace loved Nugent and was determined to change his sexuality.

Nugent died of congestive heart failure in Hoboken, NJ, in 1987.