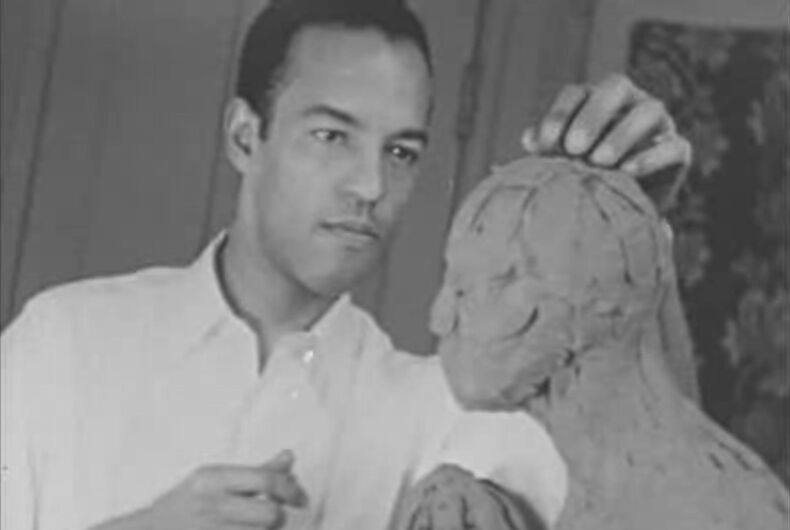 One only had to look at Richard Barthé’s art to guess his sexual orientation. During the Harlem Renaissance, he was known for works that centered on the dancing male nude. Much of his art depicted African-American men, often nude, in sensual poses.

Not that Barthé kept his orientation entirely secret. He indicated that he was a gay man in at least one interview. In an undated letter to writer Alain Locke, Barthé expressed a desire for a long-term relationship with a “Negro friend and a lover.”

Barthé was born in Bay St. Louis, Mississippi, to Richard Barthé and Marie Clementine Robateau. His father died when he was a few months old, leaving his mother to raise him alone until she married William Franklin, with whom she had five more children.

From early childhood, Barthé exhibited a talent for drawing, which his mother encouraged him to pursue.

He once said, “When I was crawling on the floor, my mother gave me paper and pencil to play with. It kept me quiet while she did her errands. At six years old I started painting. A lady my mother sewed for gave me a set of watercolors. By that time, I could draw very well.”

He continued drawing throughout his childhood and adolescence, and at the age of 12 exhibited his work in the Bay St. Louis Country Fair.

In 1924, Barthé donated his first oil painting to be auctioned at a fundraiser for a local Catholic Church. The minister was impressed enough to raise money for Barthè to pursue studies in fine art. At 23, without a high school education or formal training in art, Barthé applied and was accepted at the Art Institute of Chicago.

At the institute, Barthé turned his attention away from painting and toward sculpture, for which he would become well known. His debut as a professional sculptor came in 1927 at The Negro in Art Week exhibition. The critical acclaim that followed led to major commissions like the Bust of Henry O. Tanner and Toussaint L’Ouverture in 1928.

While studying in Chicago, Barthé had affairs with several men, some of whom became art patrons as well. He also had a brief relationship with author and actor Richard Bruce Nugent, who was a cast member in Dubose Heyward’s play “Porgy.”

During this period, Barthé also attended A’Leila Walker’s “Dark Tower” gatherings, where black and white men and women, many of whom were gay, mingled. Photographer and writer Carl Van Vechten, who was deeply involved with the black community of New York in the ’30s, became an enthusiastic supporter of Barthé’s work.

Barthé also created several public works. He sculpted an American eagle for the Social Security Building in Washington, DC, and a bas relief for the Harlem River Housing Project. In 1949, the government of Haiti commissioned him to create monuments to legendary revolutionary leaders Toussaint L’Ouverture and Jean Jacques Dessalines in Port-au-Prince.

Barthé received many honors during his career, including the Rosenwald Fellowship in 1930 and the Guggenheim Fellowship in 1940. He was also the first African American artist, along with painter Jacob Lawrence, to be represented in the permanent collection of the Metropolitan Museum of Art.

In 1947, Barthé moved to Jamaica, where he remained and continued to work until the mid-1960s. He spent several years living in Europe before he settled in Pasadena, California, where he worked on his memoirs, and editioned many of his works with assistance from actor James Garner, who remained his patron until Barthé’s death in 1989.