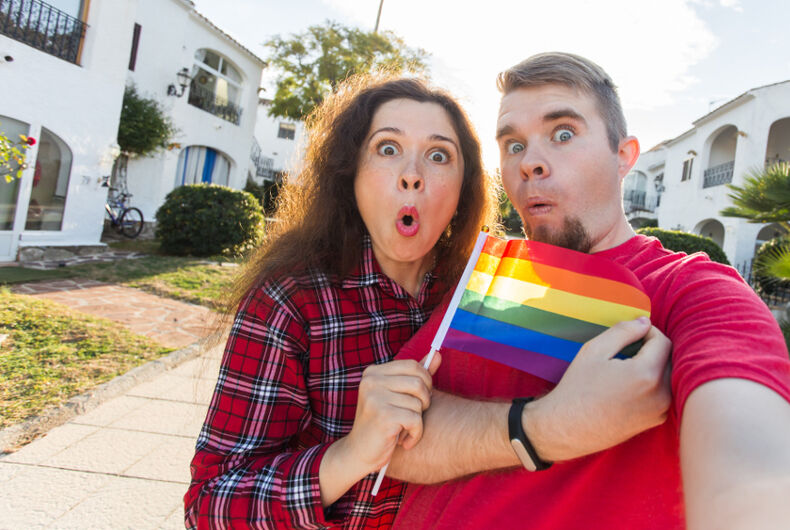 Video of an LGBTQ event held at Peet Junior High School in Cedar Falls, Iowa has riled local conservatives and liberals alike after people learned that adults were handing out rainbow flags without having their actions approved by school administrators.

Robert Michael, a parent of a child enrolled at the school, shared video on Facebook of adults handing out rainbow flag stickers. Michael shared the video in a Facebook group called Cedar Valley Patriots for Christ.

The video showed Michaels confronting Eric Giddens, a former Cedar Falls School Board member who’s also an Iowa state Democratic Senator, and Giddens’ wife, Kendra Wohlert. In the video Giddens wears a rainbow flag sticker on his shirt and Wohlert wears one on her cheek.

Wohlert told Michael that their  handing out of rainbow flags was school-approved, but school district spokesperson Janelle Darst told KCRG.com that it wasn’t entirely:

“The event, as it took place, was not expected nor approved as it became something different than ‘show kindness’. We have reviewed how we can and will handle situations like this better in the future and something like this/or similar, will not take place again.”

Darst said that a student group called “Difference” — which focuses on positive and welcoming inclusivity efforts — spearheaded the event, handing out donuts and rainbow flags to students one morning before classes began. Giddens has since said that the event was intended to “show support for LGBTQ students after a bullying incident.”

But even Jen Rowray, president of the pro-LGBTQ group PFLAG Cedar Rapids, disagreed with the adults’ approach to supporting LGBTQ teens. “Rowray says she wouldn’t want people pushing views on her child,” KCRG writes. “She said PFLAG promotes dialogue rather than confrontational information.”

“Honestly, if you want to help these kids,” Rowray told interviewers, “get LGBTQ people involved in the communication.”

Rachel Maddow is playing a role in the ‘Batwoman’ TV series