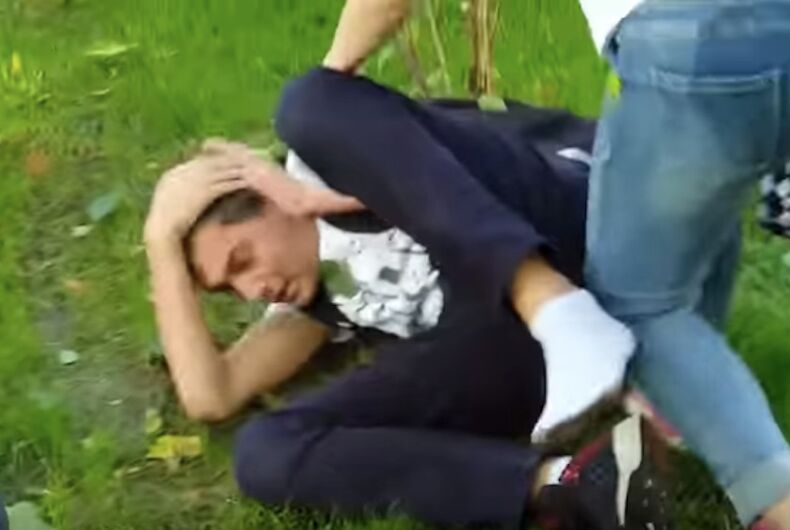 A young man narrowly escapes a severe gay bashing after being attacked by anti-gay thugs.Photo: Screencapture

Footage taken after the first-ever Pride march in Kharkiv, Ukraine — the country’s second largest city — shows a queer teenager being slapped, kicked, stomped and chased by an angry anti-gay mob until onlookers step in to help the teen escape.

Related: A trip to Ukraine offers a window into life for LGBTQ people in Eastern Europe

Roughly 2,000 pro-LGBTQ marchers took part in the event despite threats of violence from far-right groups, threats of legal action against parade organizers by the city’s mayor and escalating rhetoric among the country’s conservative politicians and religious figures. Police presence was heavy as the Pride marchers were made to walk back and forth around a small area outside of a city subway stop.

About 500 counter-protestors — mostly wearing black, affiliated under the groups “Freikorps” and “Tradition and Order” — assembled as a “March for Traditional Values.” Some threw eggs at the Pride marchers, laid their bodies across the march route to disrupt it and shouted “F*ggots!” at marchers and “Shame!” at police.

After the Pride march ended, the marchers were then subject to harassment and abuse by counter-protestors as they made their ways home.

One teen with bleached hair was smacked in the back of the head and then chased by various thugs who launched jump kicks at him. While trying to escape, the teen lost a shoe and eventually fell onto the grass, at which point a group surrounded them and began kicking and stomping their body until onlookers intervened to stop the violence. A Reuters photographer Gleb Garanich eventually helped pull the teen to safety.

Here’s a video showing the attack and anti-LGBTQ thugs fighting against police after the Kharkiv, Ukraine on Sept. 15, 2019:

“Three marchers and two police officers were injured in the clashes, while police arrested 17 far-right demonstrators for their role in the attacks,” writes Vice News. The publication adds that far-right groups have done their best to disrupt LGBTQ events around the city and to target known LGBTQ figures for violence.