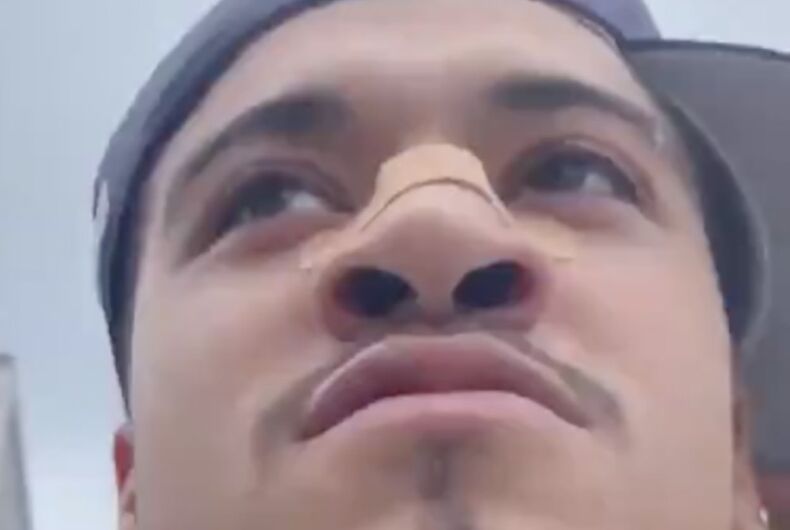 The Albatross Bar, the oldest gay bar in Queens, New York, has asked the public for help identifying a man who recoded video of himself spitting on the rainbow flag outside of their bar and uploaded it to the internet.

In the video, the man hacks up some phlegm, looks around and then spits it onto the flag hanging outside the bar.

In a tweet, the bar wrote, “If anyone recognizes this person please private message us so we can report to authorities. We won’t tolerate this unacceptable behavior.”

Here is the tweet and video showing the man spitting on the flag:

If anyone recognizes this person please private message us so we can report to authorities. We won’t tolerate this unacceptable behavior. 👎🏻 pic.twitter.com/Bef35cwnpw

The bar’s owner told The Astoria Post that someone e-mailed them a link to the video which had been uploaded on YouTube. He added:

“The way it was posted, it almost seemed like they were trying to attract attention, they wanted the attention, they wanted this to come out and get a lot of hits and a lot of negativity towards their page. We decided to download it ourselves and put it on our own platforms, so no one would be giving him any attention but we could still get it out there and hopefully find his face.”

The owner has since reported the video to the police. While it’s not a crime per se to spit on a flag — indeed, the U.S. Supreme Court has opposed any laws against desecrating the U.S. flag as violating people’s rights to free speech — some places have laws restricting such speech in a certain times, places or manners.

Regardless, the spitter could possibly still be charged with other crimes like vandalism or disturbing the peace.