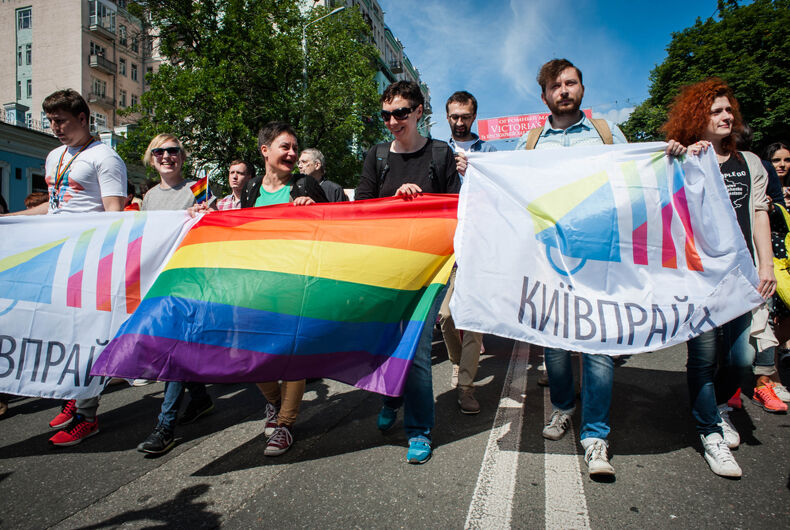 Activists march for LGBT rights in the center of Kiev in June 2016.Photo: E.Kryzhanivskyi via Shutterstock

Today, throughout the world, in large cities and small towns alike, we set aside the month of June to commemorate the historic rebellion at the Stonewall Inn in New York City’s Greenwich Village on June 28, 1969 — what many historians and activists consider to be the event sparking the modern movement for lesbian, gay, bisexual, and transgender (LGBT) civil rights.

During June, turn to almost any progressive publication, print and electronic, and you will find news coverage, including luminous reader-contributed photos of joyous revelers marching down the boulevards in brightly-colored outfits of all stripes and shades announcing their entry, their solidarity, their feisty outrage, and yes, their pride.

“We are still at the pre-Stonewall level!” — Ukrainian gay rights activist, Kiev, 22 June 2012

As amazing and inspiring as pride events have become over the years, they do not yet extend universally — especially to certain regions and entire countries in Eastern Europe. A case in point included actions on Sunday, 20 May 2012, when organizers of the first scheduled pride march planned in Ukraine were compelled to cancel the event over safety concerns after an estimated 500 neo-Nazi nationalists threatened to disrupt the proceedings.

A group of masked thugs savagely attacked activist and organizer Svyatoslav Sheremet of the group Gay Forum of Ukraine, following a media briefing regarding the march’s cancellation called just before it was due to start. Also, the previous day, vandals destroyed a photo exhibit that showcased the lives of LGBT families in Ukraine under the former Soviet Republic. This came shortly following the seventh consecutive prohibition by Russian authorities of Moscow Pride activities.

Elected officials in Ukraine, as well as in several areas of the current Russian Federation, Lithuania, Moldova, and Hungary have either passed or are in the process of shepherding through the legislative pipelines a number of bills (the so-called “Anti-Gay Propaganda” laws and draft laws) that further restrict human rights of LGBT people and ban informational efforts to educate and raise LGBT visibility and awareness.

In St. Petersburg, Russia’s elected officials approved a law criminalizing “the propaganda of homosexuality and pedophilia among minors,” while mandating fines up to $16,000 on individuals and up to $160,000 on organizations. These bans against “gay propaganda” also remain in effect in the Arkhangelsk, Kostroma, and Ryanzan regions of Russia. The Siberian regional government also added a ban on “gay propaganda.”

According to the NDTV news website and ActUp.org, Alexander Ilushchenko, leader of the Siberian regional committee on culture, education, sports, and youth policy talked about the purpose of the new law, saying, “It’s mainly about various gay parades…about their promotion among minors. It’s about preventing people who are not related to homosexuality from explaining to their kids what is going on.”

Lithuania’s Seimas (Parliament) passed a nationwide law in 2009 prohibiting the media and schools from distributing public information that has an adverse effect on the mental, physical, or intellectual health and moral development of young people, including the dissemination of information that promotes violence, suicide, and homosexuality, and specifically, that “agitates for homosexual, bisexual relations, or polygamy.” Both in 2007 and 2008, authorities in the cities of Vilnius and Kowno barred a “tolerance march” sponsored by the European Commission.

In Moldova, the city of Balti ratified a law against “gay propaganda,” though the country’s parliament rejected such a law nationwide. In 2012, the Hungarian far-right political party Jobbik also submitted an anti-gay propaganda bill to the country’s parliament. The bill would have banned “promotion of sexual deviation” targeting LGBT people as well as banning pedophilic behavior. Also in 2012, a police commission in Budapest turned down a request to allow an annual LGBT Pride march. A metropolitan court overturned a similar ban the previous year.

The Case of Ukraine

On June 20, 2011, six members of the Ukrainian Parliament from all the major political parties introduced a draft law (a bill), No. 8711 titled “On Introduction of Changes to Certain Legislative Acts of Ukraine (regarding protection of children’s rights on the safe information sphere).”

The draft law would have restricted the basic human and civil rights of LGBT people including freedom of speech and freedom of assembly. This bill, if passed, would have amended the Ukrainian Criminal Code in sections “On Protection of Public Morals,” “On Print Mass Media,” “On Television and Radio,” and “On Publishing,” thereby making it a criminal offense to promote “propaganda of homosexualizm” by distributing information and the use of public broadcasting. Violation of Ukraine’s criminal code carries penalties ranging from a fine to 5 years imprisonment.

Though Ukraine’s Parliament decriminalized homosexuality in 1991, within the draft law, authors gave their justification for its enactment as follows:

The law is “designed to strengthen anti-homosexual propaganda in Ukraine and ensure the legal framework for prosecution of violations of public order and morality of the Ukrainian society. The spread of homosexualizm is a threat to national security, as it leads to the epidemic of HIV/AIDS and destroys the institution of family and can cause a demographic crisis. To address these demographic challenges, it is necessary to create conditions to direct public policy to improve the nation’s morals, including introduction of effective mechanisms for strengthening family values and preventing the spread of manifestations of moral depravity in the media. It is moral depravity and so-called sexual freedom promoted in Ukraine, that pose a threat to the above values – health, family institution, the constitutional rights of fathers, mothers, children, freedom of speech and religion, and a stable demographic situation.”

The draft law defined “propaganda of homosexuality” as “any activity that is purposed for and/or takes the form of intentional dissemination of any affirmative information about homosexuality that can damage the physical and mental health of a child as well as his/her moral and spiritual development, instill in him/her false ideas about the equal social value of traditional and non-traditional marital relations, and influence his/her future choice of social orientation.”

This can take the form of public as well as non-public “propaganda” including “holding of rallies, parades, pickets, demonstrations, and other mass public events,…lecturing, giving of thematic talks or elective classes, organization of interactive games, conducting of educational work, or holding of other educational events concerning homosexuality,…dissemination through media outlets of messages or articles about homosexuality, or of any appeals to adopt a homosexual lifestyle….”

Though the draft law was eventually tabled, members of the Ukrainian Parliament, Vadim Kolisnichenko and Verkhovna Rada, resubmitted it as No. 10290 on March 30, 2012, titled “On Prohibition of Propaganda of Homosexuality Aimed at Children.”

Ukraine gained its independence from the former Soviet Union in 1991, though its transition to a modern democratic republic has been precarious at best. For example, hundreds of thousands of protesters took to the streets in and around Kiev’s Independence Square ultimately inspiring millions throughout Ukraine for 17 days in freezing temperatures to engage in acts of civil disobedience during November 2004 in what has come to be called “The Orange Revolution.”

Demonstrators protested the deceitful and corrupt national presidential elections in which Viktor Yanukovych was officially declared the winner against Viktor Yushchenko, his run-off opponent. During the election process, Mr. Yushchenko’s face was pockmarked and scarred after he ingested a toxic substance, which he claimed was slipped into his food by government agents who attempted to force him out of the presidential campaign. Protestors succeeded in their calls for new elections in which Yushchenko was ultimately declared president of Ukraine.

Shortly after taking power, however, party infighting and charges of corruption seriously diminished Yushchenko’s popularity and tore apart the unseasoned democratic movement. As irony would have it, Viktor Yanukovych, the object of scorn and protest of the Orange Revolutionaries, sits today as Ukraine’s president.

My Travels to Ukraine

I had the opportunity to travel to Ukraine to meet with LGBT activists to compare and contrast organizing strategies between our two countries and to present a workshop focusing on internalized oppression at their fifth annual conference in June 2012, organized by a standing committee of LGBT movement activists and professionals from HIV/AIDS service groups.

The day prior to the conference, we all heard news accounts of the vicious beating in the Darnytsia district of Kiev of Taras Karasiychuk, the head of the organizing committee of the ill-fated LGBT march in Kiev and a registered participant of our conference.

While listening to expert panels and participating in workshops ranging from strategies in counteracting the clearly discriminatory draft legislation banning so-called “gay propaganda” currently being debated in the Parliament, to HIV/AIDS education efforts, to learning about and working with transgender people, to financial management practices for non-governmental organizations (NGOs), conference participants always had on their minds the physical and emotional condition of their beloved comrade.

Conference organizers provided frequent updates on Taras’s condition. On the second day of the conference, Taras underwent surgery on his broken jaw in two places and on the soft tissue on his head. He also suffered a concussion.

Throughout the weekend, conference participants stuffed Ukrainian currency of various denominations of bright colors comprising a veritable rainbow of heartfelt and hopeful donations for the speedy recovery of their friend and colleague, which signaled his spiritual presence inspiring and grounding the conference goers’ urgent efforts to work for a more just and welcoming society. We also learned that police officers had not yet arrested any suspects in the case.

Among other organizations, Amnesty International and the European Union have denounced the violent events transpiring in Ukraine and other countries throughout Eastern Europe. In reference to Ukraine, Catherine Ashton, European Union Policy Chief, expressed in a formal statement her “solidarity with the victims of these acts,” and urged the Ukrainian authorities to investigate the violent incidents “thoroughly and to bring the perpetrators to justice.” Ashton also asked Ukrainian authorities “to protect and to enforce the rights of all Ukrainians, including lesbian, gay, bisexual and transgender persons, to peaceful assembly and to freedom of expression.”