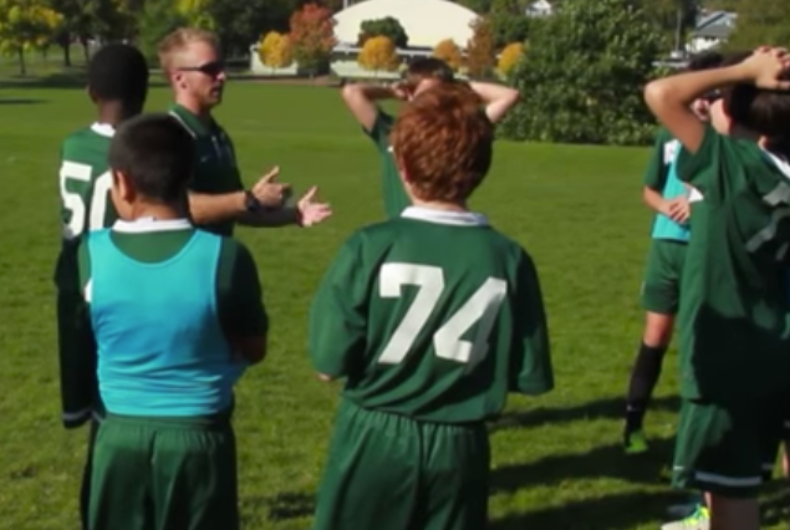 Kaig Lichtner is the founder of Portland Community Football Club (PCFC), an organization that aims to give low-income youth access to high-quality soccer. He also happens to be transgender.

He recently came out to one of his teams, in an effort to encourage inclusion and respect for others.

“Some of you may or may not know this, but I am transgender,” he said. “What that means is that I was born a girl, and that I grew up playing soccer as a girl. And that’s not something I share with players or people in the sports world very often because it’s not an easy thing. We have a lot of rules in sports about how boys play and how girls play. And that’s not really fair.”

He used his experience being discriminated against for his gender to relate to the kids’ experiences with racism and xenophobia.

“I bet you all had things said to you because of the color of your skin or the way you talk or the country your parents are from or any of that that’s really similar to how I got treated as a kid too,” he explained. “So that’s why it was really important to me to tell you guys.”

While he was nervous about sharing something so personal with the team, their reaction turned out to be nothing to fear.

After sharing his story — and no doubt bracing himself for an uncomfortable response — the first question showed that for some kids, it really was no big deal.

The question: “How old are you?”

Lichtner is well prepared for this work. In addition to a background in soccer, he has a master’s in social work and co-founded TransActive, a Portland-based organization supporting transgender and gender non-conforming youth and their families.

Today, he uses those skills to create opportunities for youth to play soccer in an environment that is inclusive of all, regardless of race, socioeconomic status, gender, or sexual orientation.

Watch the coach’s coming out speech and hear the reactions from his team below.