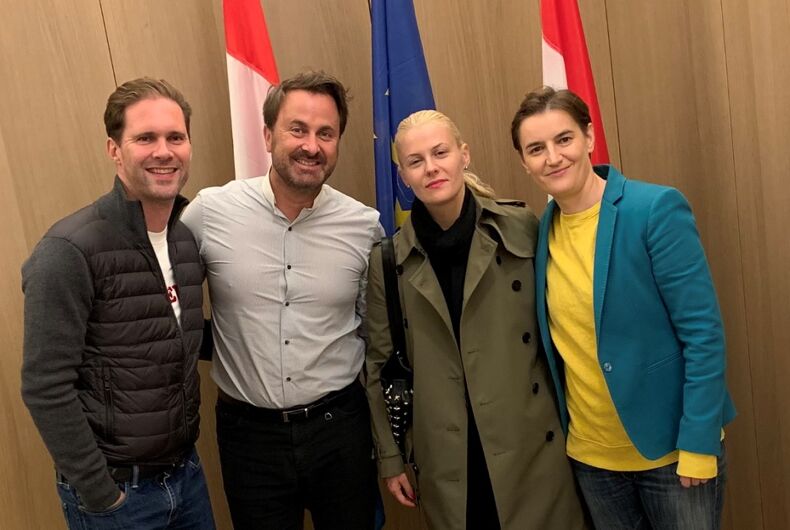 Two of Europe’s gay heads of government and their partners met earlier this week.

“The future of Serbia is in the European family,” Bettel said at a joint press conference, but stressed that Serbia must “do more to ensure the rule of law, an independent judiciary, and press freedom” and reduce corruption.

At the end of their meeting, Bettel posted a picture of the two world leaders with their partners, Milica Đurđić and Gauthier Destenay.

Tomorrow i ll recieve officially the @SerbianPM , tonight @GDestenay and myself are happy to welcome our friends @anabrnabic and Milica and having a visit of @CityLuxembourg together. XB pic.twitter.com/fTs0bRxztd

Luxembourg is at the forefront of LGBTQ equality. It has recognized marriage equality since 2015, bans anti-LGBTQ discrimination in employment, public accommodations, health care, and other areas, and recognizes a person’s gender identity without requiring surgery, medical treatment, or sterilization.

Serbia is not as LGBTQ friendly. While the country bans discrimination against LGBTQ people, the government does not recognize marriage equality, and only recently removed the surgery requirement for correcting one’s gender marker on national ID but still requires a year of hormone replacement therapy.

Shortly after Brnabić gave birth to the couple’s child, the first out world leader to do so, Serbian lawmakers passed legislation that would prevent lesbians from using artificial insemination to become pregnant.

Bettel has been prime minister since 2013 and Brnabić since 2017.