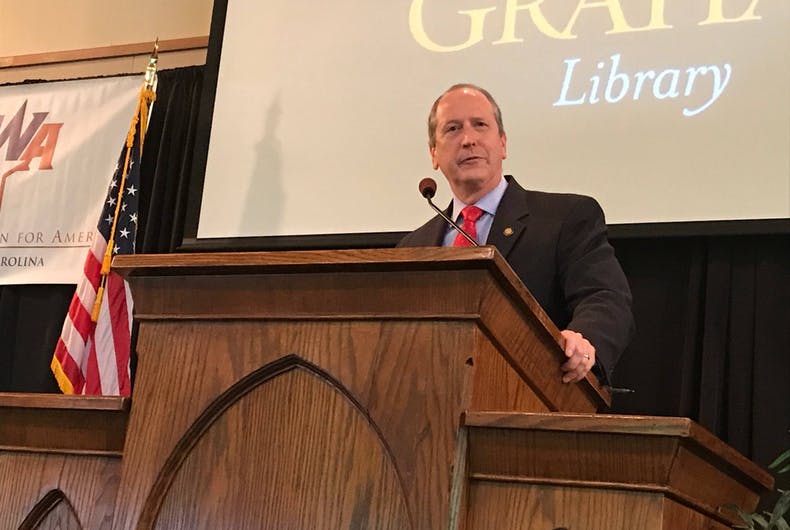 While Bishop’s bill tanked the state’s economy as businesses, conferences, and performers quickly started boycotting the state, lawmakers compromised with Democratic governor Roy Cooper to “tweak” the law and remove the bathroom portion. A ban on cities enacting human rights ordinances that go further than state law was left in place; the measure also repealed protections for LGBT people where they were already passed.

The bill was signed into law by Republican Pat McCrory who lost his office as soon as voters had a chance to vote on his performance.

McCready ran in the last election, but was beaten by far right evangelical minister Mark Harris. Allegations soon surfaced that Harris’ campaign had engaged in voter fraud to win the election and the results were annulled.

Bishop won the seat with a scant 2% of the vote.

Bishop is a far right politician with longstanding animosity toward the LGBTQ community. Earlier this year, he claimed that stopping LGBTQ equality is like saving Jews during the Holocaust; he compared himself to Oskar Schindler.

Still that didn’t stop President Donald Trump from declaring himself the true victor of the night as he claimed credit for turning the Bishop campaign around. He tweeted that Bishop was “down 17 points 3 weeks ago” until he stepped in to support the campaign. There is no evidence that Bishop ever trailed McCready by that amount; the race has been neck-and-neck the entire time.

Dan Bishop was down 17 points 3 weeks ago. He then asked me for help, we changed his strategy together, and he ran a great race. Big Rally last night. Now it looks like he is going to win. @CNN & @MSNBC are moving their big studio equipment and talent out. Stay tuned!

A gay teen who was brutally bullied for years fought back. He got 14 years in prison for it.