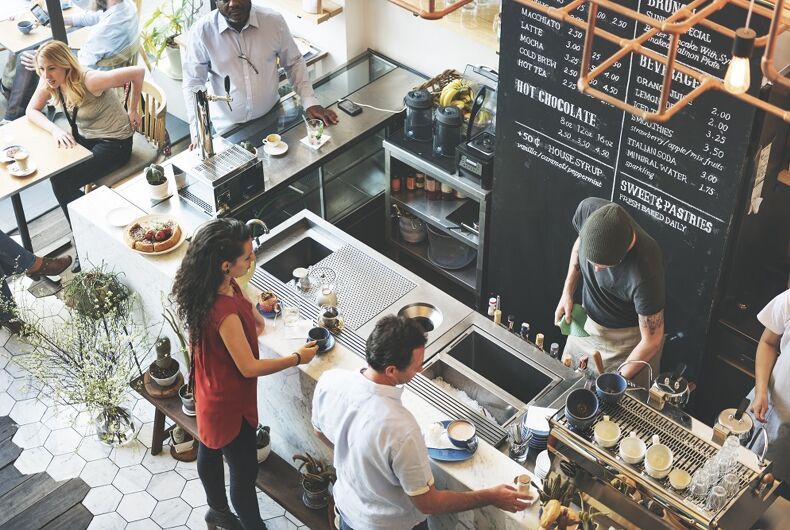 Natalie Weiss worked at Cultiva Coffee in Lincoln, Nebraska, for over a year. Until last week.

Marilyn Synek, who works for the Nebraska Family Alliance, came into the shop for coffee. Weiss recognized her and called her “bigoted trash,” according to Synek.

Related: Nebraska to drop its lawsuit over Obama’s guidance on transgender students

“You are not fucking wanted in our restaurant, so get out and don’t come back,” she said Weiss told her. “If you do try to come back, we will all refuse any service to you.”

“I was asked to leave Cultiva Coffee and never come back because of my conservative [principles],” Syneck wrote on Facebook.

“It was packed and the other customers turned to watch. It was pretty humiliating.”

Weiss also shared the story on Facebook, saying that she did confront Synek and that her behavior was “unprofessional.”

But she said it’s exactly what the Nebraska Family Alliance wants to normalize for LGBTQ people. They have been fighting against adding sexual orientation and gender identity to Lincoln’s anti-discrimination law.

“Nebraskans like myself do lose our jobs, and sometimes our living arrangements, because of who we are, and people like the Nebraska Family Alliance are why,” wrote Weiss. “Their money, their influence, and their national political allies are why Lincoln cannot mount a successful ballot initiative concerning Lincoln’s Fairness Ordinance.”

“What I did was unprofessional and I certainly would not want to be treated the way I treated that woman today,” Weiss told the Lincoln Journal-Star. “The fact of the matter is, that person and her political allies advocate for that type of behavior to be legal and they do it every single year in the Legislature.”

Cultiva co-owner Sharon Grossman said that she apologized to Synek and that Weiss has already been fired.

“Whatever your race, religion, gender identity, or general political beliefs, we just want you to enjoy our food and coffee, and have a good time, and tell other people you had a good time,” she wrote on Facebook. “We’re sorry there was a moment when that didn’t happen today.”

Synek said that she accepts the apology. “I’ve always enjoyed their coffee and crepes, and I accept their apology,” she wrote.

Nebraska civil rights laws do not include political affiliation or gender identity.

Mike Pence is telling people he was bitten by a horse. He also says he’s not antigay.