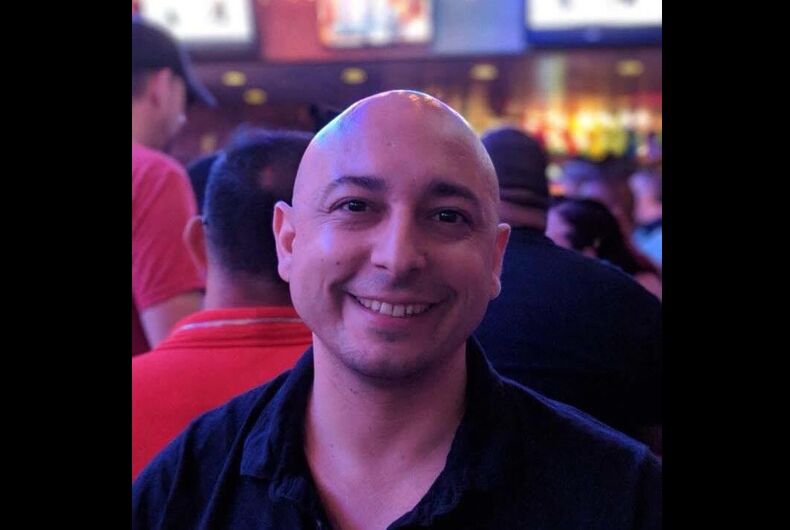 An abiding commitment to family, community, and the service of others is what drives David Perez. In his nearly 15 years as a Washington, DC resident, he has exemplified that commitment through various posts, both voluntary and professional, that serve communities at the local and national levels.

His dedication, leadership, and service has made him a popular fixture in Washington’s LGBTQ Latinx community. Perez credits much of this passion to his parents, whose values served as a model for his own.

“It really stems from the example my parents set. We grew up in a faith community and a big part of it was always giving back. Whether it was at church, or a local sports team, or helping out at a soup kitchen,” Perez told LGBTQ Nation.

And Perez does indeed live those values every day. By day, Perez serves as the Senior Director of Donor Relations for the Latino civil rights group, Hispanic Federation. In this capacity, he also serves as the chair for the LGBTQ Task Force for the National Hispanic Leadership Agenda, a group of 45 leading Latino organizations that develops a public policy agenda every four years to highlight the priorities of the Latino community.

“I was thankful to be asked the co-chair of NHLA’s task force,” said Perez.  “They have a lot of power in their membership to speak up for millions in the Latino community.”

In 2016, NHLA’s public policy agenda was the most inclusive one they had ever published, but, as Perez notes, it wasn’t a comprehensive assessment of every policy area that needs to have a LGBTQ-Latinx lens. So, the group created this new task force to redo the entire document. It will be published early next year.

“What’s really powerful about this is that there will be 45 Latino national civil rights orgs behind this agenda making it inclusive of LGBTQ Latinos.”

His work with NHLA, however, is just one part of his service. For six years, Perez served as the president of the Latino GLBT History Project, a local DC group whose mission is to document and archive the contributions of DC queer Latinx people.

In addition to his work with the “History Project,” Perez also plays an active role in planning, recruiting, and running the Union=Fuerza Latinx Institute, one of the most popular pre-con at Creating Change, the Task Force’s multi-day conferences for LGBTQ activists and organizers. This year, Union=Fuerza will be in Dallas and Perez is expecting one of the biggest turnouts they have ever had. (If you’re interested, they’re accepting applications now)

David Perez is one busy advocate. Nobody could blame him for wanting to take a break every so often, but he credits his childhood with the drive to keep going. Growing up in a conservative, evangelical district in North San Diego, Perez said he often felt isolated from the rest of community. What keeps him going is the thought of his younger self without anyone to look up to.

“I just imagine being that young child, not knowing any Latinx role models, feeling isolated and not having anyone to talk to, “ Perez said to LGBTQ Nation. “So, today I just want to make sure that the work I’m doing is uplifting other queer Latinx people, and then hopefully those young people can have role models and have people to look up to.”

In high school, Perez thought he would be a pastor or a missionary after graduation. He went to an evangelical undergraduate school, Biola University, that had a community contract for students: no smoking, no drinking, no premarital sex, and no “homosexual” activity.

He would remain in the closet throughout undergraduate school. In 2005, Perez moved to Washington, DC for graduate school, and he met his first gay friend. During his second year, he finally came out. He told his friends in the summer first, and during Christmas 2006, at the age of 23, he finally told his family.

“My friends were very supportive. My parents were supportive, too. My mom cried, and it was an emotional process, but they told me ‘of course we’ll still love you’,” said Perez. “From there, we started building a relationship around this new part of my life I hadn’t shared with them before.”

It’s no secret that Latinx people are under attack by the Trump administration. Perez says that fighting back against these attacks is imperative. The way to do that: organize.

“I love seeing the news that Dolores Huerta, in her 90s, is still organizing. I think that’s what we have to do now,” he said. “We have to register our community members to vote, educate them on how policy and voting for elected officials impacts the live and safety of our community.”

Take the time do self-introspection and consider the plight of the most marginalized among us.

“It’s really critical to think about who you are and love yourself,” Perez told LGBTQ Nation. “Thinking about the marginalized part of our community is also critical. Bringing those folks to the forefront of leadership, and decision-making positions of power and prioritizing the issues of the most marginalized and including those folks in the solutions is really important to move us to the next step.”

Milo signed up for a furry convention, but furries aren’t having it