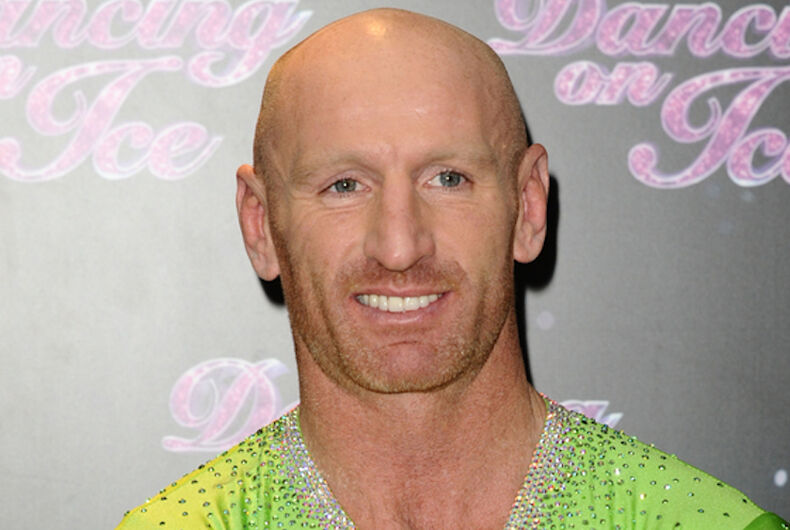 In a video posted yesterday, Welsh former pro-rugby player Gareth Thomas came out as HIV-positive, saying that he was “forced” to reveal his status. In a BBC documentary, he revealed that a British tabloid had threatened to out him.

In the emotional video (below), Thomas says, “Hello, my name is Gareth Thomas and I want to share my secret with you. Why? Because it’s mine to tell you. Not the evil making my life hell, threatening to tell you before I do, and because I believe in you and I trust you.”

After closing his eyes, looking down and taking a breath, Thomas continues, “I am living with HIV. Now you have that information, that makes me extremely vulnerable, but it does not make me weak.”

“Now, even though I’ve been forced to tell you this,” he continues, “I choose to fight, to educate and break the stigma around this subject, and that begins today as I take on the toughest Ironman [triathlon] in the world in Tempe [Arizona] and push myself physically to the limits.”

“I’m asking you to help me to show that everyone lives in fear of people’s reactions and opinions to something about them, but that doesn’t mean that we should have to hide. But to do this, I really really need your support.”

Here’s the video in which he comes out as HIV-positive:

PinkNews points out, “The ex-British and Irish Lions captain will talk about his diagnosis in a BBC Wales documentary on Wednesday.” The BBC reports, “The documentary shows Thomas’s anxiety and having to consult legal representatives after a tabloid newspaper found out about his HIV status. It led to journalists going to his parents’ home.”

“I needed to take control of my life,” Thomas said.

In response to his video, Kate Middleton and Prince William, the Duke and Duchess of Cambridge, supportively said, “Courageous as ever – legend on the pitch and legend off it. You have our support Gareth. W.”

In December 2009, Thomas publicly came out as gay. At the time, he was a married 35-year-old Cardiff Blues player, admitted he had been suicidal at times as he hid his sexuality from his wife, his teammates and the macho world of professional rugby as a whole.

Correction: An earlier version of this story incorrectly identified Kate Middleton and Prince William as the Duke and Duchess of Wales.

Pete Buttigieg did well in the presidential debate, but was it enough?