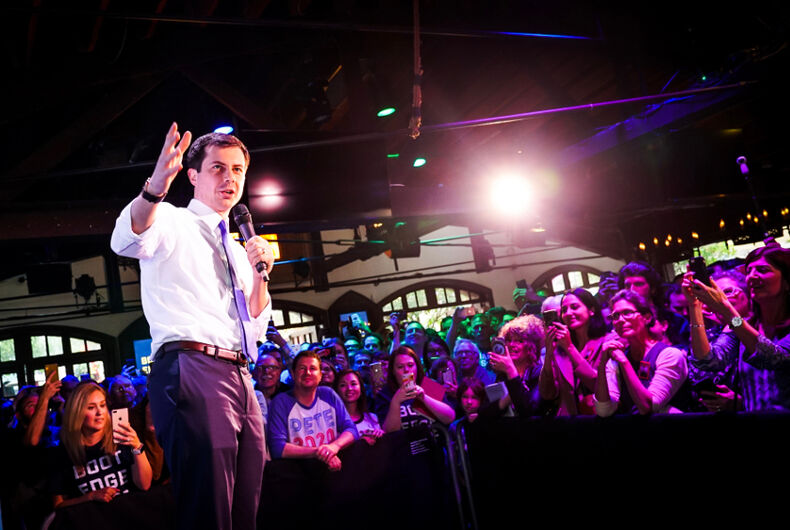 Presidential candidate debates are made for Pete Buttigieg. The South Bend mayor thinks on his feet and speaks eloquently in full paragraphs. Thursday night’s debate was no different. He had a dramatic moment talking about serving in the military under Don’t Ask, Don’t Tell, and he expressed the feelings of a lot of viewers when he chastised his fellow candidates for bickering. Some pundits even named Buttigieg one of the winners of the debate.

But in a lot of the debate coverage, Buttigieg was little more than a footnote. The New York Times’ roundup of its columnists gave Buttigieg a mediocre ranking, with some columnist praising him for a solid performance and pun-prone Maureen Down declaring he was “Petering out.”

Even more pointed was The New Yorker, with a story headlined “Where Was Mayor Pete at the Democratic Debate?” Writer Eric Lach summed up a lot of coverage when he wrote, “On Thursday night, during the Democratic debate, in Houston, it was hard to see the Buttigieg who had risen to the cusp of front-runner status in the 2020 field.”

There’s no question that Buttigieg’s campaign is in a bit of slump now. Earlier this year, he emerged as a surprising breakthrough candidate who won the attention — and dollars — of a lot of Democrats. In spring polls, Buttigieg was beating candidates with more obvious presidential credentials which, combined with his fundraising skills, made him a breakout candidate.

But he hasn’t really broken through into the top tier. Instead, Buttigieg is consistently polling in the mid-single digits. His momentum was interrupted by the police shooting of a black man in South Bend, which highlighted his somewhat fraught relationship with the city’s African-American community.

In the meantime, the primary field began to sort itself out. Now there are clearly three front runners: Joe Biden, Bernie Sanders and an increasingly ascendant Elizabeth Warren. Buttigieg and Kamala Harris are hanging on at the next level, but neither has taken off as one might’ve expected.

What Buttigieg has going for him is all the money he raised. He’s putting a lot of money into Iowa, the state where voters will first have their say. He’s begun running ads there that decry polarization in politics, and he’s planning to open 20 campaign offices in the state in 20 days, with 100 staffers.

Iowa is the kind of state where Buttigieg should do well. It’s midwestern, like him, and the voting population is whiter than in other states. (A recent Fox News poll put his support among black voters at one percent.)

Unfortunately, as Nate Silver, the gay polling guru points out, raising lots of money “hasn’t been a very predictive indicator historically” of who wins the nomination. Connecting with voters is what matters.

Buttigieg still has plenty of opportunities to do just that. The media narrative can change at a moment’s notice, and Buttigieg can emerge as a younger, de-gaffed version of Joe Biden for voters who still hope for an end to polarization in politics and who aren’t sure about the Democrats’ leftward tilt.

But each opportunity that passes without Buttigieg having a breakthrough moment is a lost opportunity for him to regain his momentum. At some point, even having a lot of money can’t overcome that.