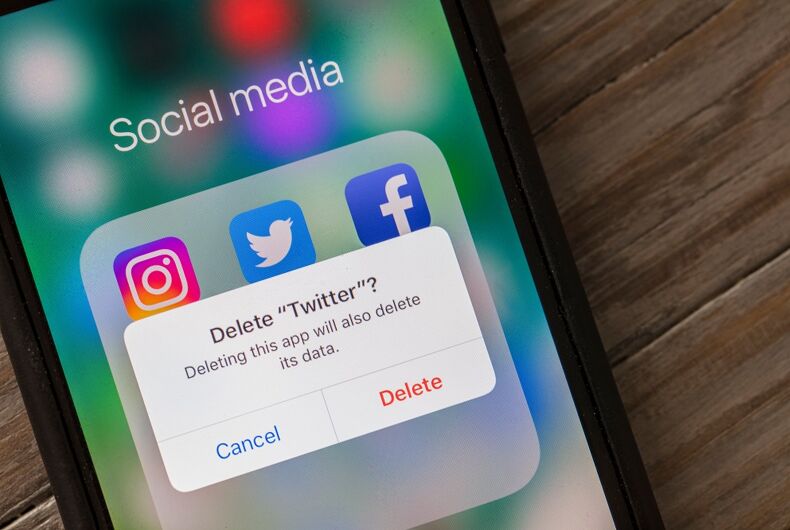 A Republican candidate in Virginia paid a service $30 to delete homophobic, sexist, and violent tweets, but his Democratic opponent found them anyway.

John Gray is a Republican running for Prince William County Board of Supervisors in northern Virginia, and he has quite a history on Twitter.

Related: This Prince William County Republican told a teen with 2 moms that she ‘deserves’ a father

His opponent, Democrat Ann Wheeler, said that her campaign was analyzing Gray’s campaign finance records when they found two payments of $15 to Tweet Deleter, a service that says it can delete tweets.

Tweet Deleter did remove the tweets from his own timeline, but they were still on the app and could by found by searching his user name.

Another tweet deleted by @johngraycpa is very relevant today- on the topic of impeachment.

Gray called Hillary Clinton “uglier than shit,” adding: “Can you imagine being so desperate as to even WANTING to have sex with HRC, more or less even doing the deed with her? OMG. Shrivels me up!”

. @johngraycpa deleted this tweet and it's not just because of performance issues. He doesn't want Prince William voters to know how he speaks about women and their kids. Thousands of women work for our county government and deserve better than a Chairman who talks like this. pic.twitter.com/03HPdHxZFC

In another tweet, he excused the Pulse shooter, who killed 49 people in an Orlando LGBTQ nightclub. “Well, what did you expect? Being Islamic you knew he had the right to beat you,” Gray wrote.

Gray tweeted that NFL stands for “Neeling Felons League,” referring to NFL players who have kneeled during the national anthem to protest police violence against African Americans.

“AfroAmericans voted Obama only because he is black,” Gray wrote in one tweet. In another: “Bible verse of the day: Give a man a fish and he eats for a day. Deport him and you don’t have to feed him again POTUS 20:16.”

. @johngraycpa has been ducking reporters since this story came out- but that won't work any longer as we have our biggest debate tonight.

I urge everyone to come out and express how you feel about the racist, sexist and bigoted things he has said.https://t.co/pKaeileifh pic.twitter.com/2klmma4uUk

This is one of the tweets @johngraycpa didn't want you to see. pic.twitter.com/7jsb48XtxK

“I didn’t realize that he was that extreme,” Wheeler, the Democrat in the race, said.

Gray told the Washington Post that his tweets were “completely inappropriate.” He also said that his tweet about guns and ammunition wasn’t a threat, just a metaphor.

The election is scheduled for November 5 of this year.

A House Republican introduced a bill to protect gay fetuses. Then he quit.