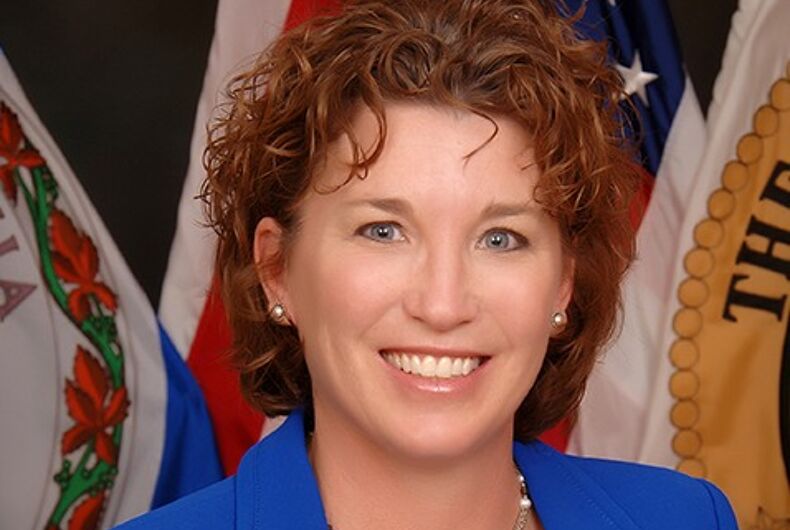 A Republican elected official in Virginia told a lesbian couple’s daughter that she “deserved” a father.

Rose BruMar, 15, was handing out sample ballots for the Democratic Party in Prince William County on election day earlier this month, when she ran into Supervisor Jeanine Lawson, who was greeting voters.

Lawson said that she started talking with Rose and that the teenager implied that she had two moms when she said, “One of my moms doesn’t like you.”

“That caught me by surprise a bit,” Lawson said. “She told me things about her family life, and I told her in a very polite way, I said I believe children deserve a mother and a father. It was not a debate about anything.”

She’s correct that it’s not a debate or an argument to say something like that. It’s just hatred.

Lawson said that the conversation was “pleasant and civil.” “There was nothing at all hostile about my conversation with the young lady, so much so that we continued to talk about her guitar lessons afterward,” Lawson said.

At some point, three other Republican women joined and ganged up on the teenager in a discussion about reproductive freedom.

That’s when one of Rose’s mothers, Evelyn, saw what was happening.

“When I walked up, lots of people were yelling, just getting aggressive,” she said. “I jumped in as soon as I got there, and told them, ‘This is not how you have a discussion with a child.’”

Now the moms want the county Board of Supervisors to censure Lawson.

“When did it become acceptable for an elected official to bully a child?” Heidi BruMar said at the board’s meeting this week. “Someone is coming to unseat you in 2019… Bullying won’t be tolerated in this community.”

Here are the 10 best Trump memes according to our fans