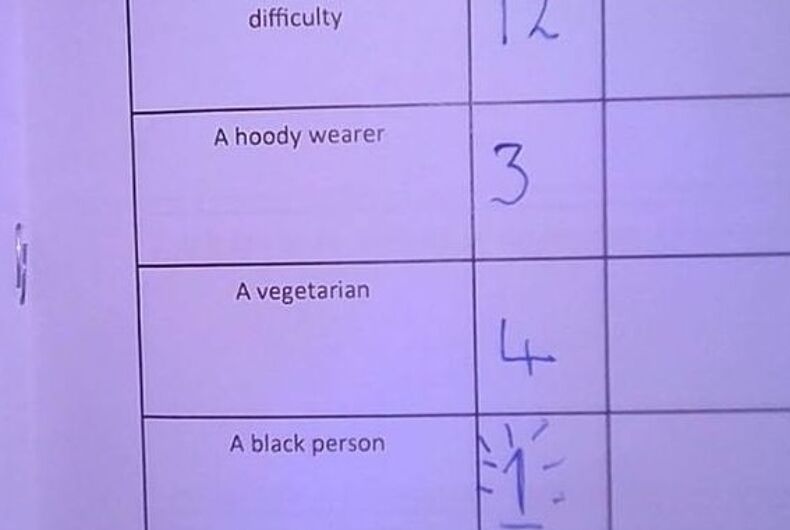 A school in England got a complaint from one mother after a teacher asked students to rank fourteen groups of people based on how much they would like to have these people as a neighbor.

Chayse Cole, 11, was given this worksheet to fill out at Bristol Free School and was told to rank, from one to fourteen, various types of people, like a vegetarian, a “hoody” wearer, a guitarist in a band, a black person, and a gay man.

She told her mother Naomi Davis about it when she got home, and her mother complained to the school.

“They were given the worksheet to complete and then afterwards the teacher gave this big Martin Luther King type speech about how everyone was equal, and that was that,” Davis said. “Chayse was the only one in the class who put her hand up afterwards and tried to say, ‘But that doesn’t make any sense.'”

She said that her daughter felt “singled out and isolated” as a black student. “The school shouldn’t have a situation where children feel like they can’t talk to teachers about these things.”

The worksheet is not part of the national curriculum. Instead, it was an exercise created by the school and has been used for the past five years to get students to think about the advantages of diversity.

“The lesson is about citizenship and diversity, and focuses particularly on homophobia,” a spokesperson for the school said.

“In one element of the lesson, students are asked to list the advantages of having a neighbor from particular minority groups. The eleven groups have been selected as groups that, at times, have been targets of prejudice.”

“The lesson has proved effective in developing the understanding of Year 7 students about the value of diversity and the danger of prejudice.”

The spokesperson said that the school never received a complaint about the worksheet before, but that they’re taking Davis’s criticism seriously.

Davis said that the school was apologetic and understanding. “They acknowledged that it was completely unacceptable racial profiling and the wording needs to be changed immediately,” she said.

It’s hard to see in what context a worksheet like this would be appropriate – it’s directly asking students to be prejudiced.

Even the exercise described by the spokesperson sounds bad. Why should anyone have to bring an advantage to a neighborhood to have a right to live there?

But even if there is a context in which this works, what really gets me is the assumption that only white, straight kids would be filling this out. Chayse put a “1” with lines around it for the black person, which is great. But I can only imagine how alienating it would feel to be black in a school with mostly white students, filling out this worksheet. In the exercise, you’re not the person being asked; you’re the neighbor. Your classmates are the ones who get to decide if they want to live next to you or not.

The school said that it would be asking for help from minority parents in re-working this exercise. That’s a start.

A gay couple is getting hate mail from a sore loser