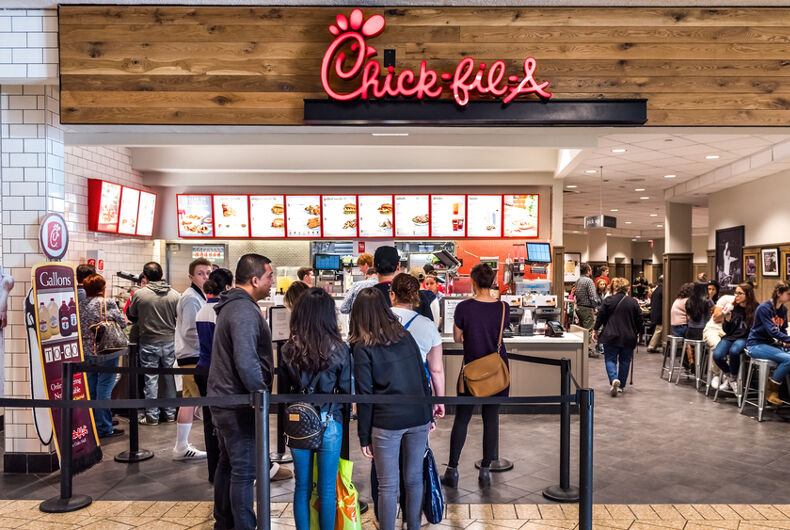 Despite student and faculty protests against bringing a Chick-fil-A to Purdue University in Indiana, the administration has said the “overwhelming demand for [Chick-fil-A’s] service from students, staff, and faculty” has convinced school administrators to allow the anti-LGBTQ fast food restaurant on campus.

Faculty on the University Senate and Purdue’s student body president had opposed a Chick-fil-A opening on campus because of the company’s long and ongoing record of anti-LGBTQ political stances and donations.

A statement from Purdue’s administrators read:

While we respect and protect the rights of all to express their opinions at Purdue, this clarification is intended to reassure our students and others that this long-requested dining option will not be taken from them…. We would not be promoting choice and freedom by depriving thousands of people in our community of a choice they have long sought…. And, we would not be practicing inclusion by excluding a completely legitimate business and its staff from our campus.

In addition to citing student demand, Purdue administrators say that the on-campus franchise owner is a female Purdue graduate who has “signed and observed a commitment of equal access and treatment in her employment and service practices,” a demand made by the University Senate’s Equity and Diversity Committee.

However, Chick-fil-A’s hiring practices aren’t the issue — their anti-LGBTQ donations are.

Earlier this year, 2017 tax filings showed that the Chick-fil-A Foundation donated more than $1.8 million to three groups with anti-LGBTQ policies: the Fellowship of Christian Athletes which forbids its collegiate athlete members from “homosexual acts,” the Paul Anderson Youth Home for troubled youth which says homosexuality is wrong, and the Salvation Army which has a history of opposing LGBTQ non-discrimination protections.

This year, the Christian-owned fast food chain was banned from a New Jersey university campus. In response, the company released a statement saying, “We have no policy of discrimination against any group, and we do not have a political or social agenda,”