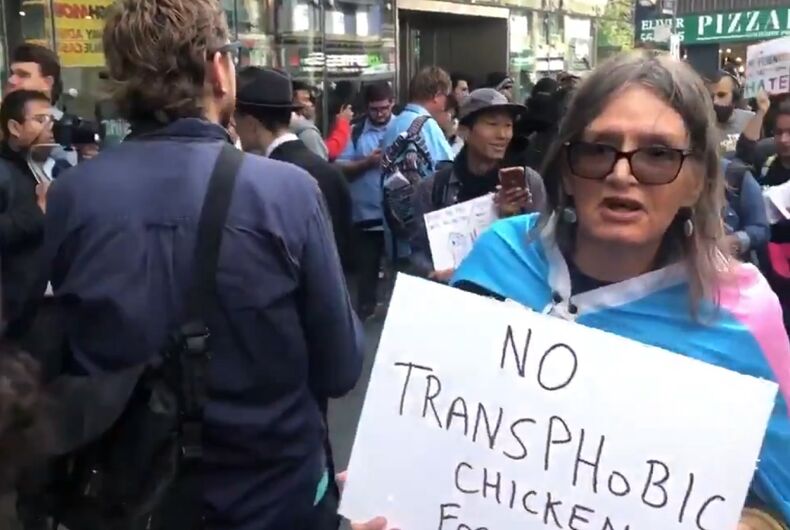 Earlier today Chick-fil-A hosted the grand opening of its first restaurant in Toronto, Canada. And protestors crashed the festivities to shame people for eating at the anti-LGBTQ fast food chain.

Chick-fil-A just opened a store at Yonge and Bloor Streets in downtown Toronto. Protestors slammed the location to draw attention to the restaurants anti-LGBTQ views.

Others chanted “Hey hey, ho ho, homophobia’s got to go.”

“We won’t allow hateful rhetoric to be here,” Justin Khan, who works with The 519, told the CBC. The 519 is an LGBTQ community center that’s located near the Chick-fil-A and they joined the protest.

“The fact that Chick-fil-A is opening on the streets of Toronto is something that is quite alarming.”

Instead of drawing attention away from the restaurant’s anti-LGBTQ donations, Christian activists said that this is an example of prejudice against Christianity itself.

“Christians will not be driven out of the city,” evangelical Christian leader Charles McVety told CTV.

“We have sympathy for the gay community, we love the gay community but we would never commend anyone for shouting people down,” he said. “This is school yard bullying tactics and we are against bulling.”

Franchise owner Wilson Yang said, “Our focus is on offering a welcoming and respectful environment for our guests and team members, and we encourage people to give us a try.”

Is this hate group asking for a violent end to Drag Queen Story Hour?