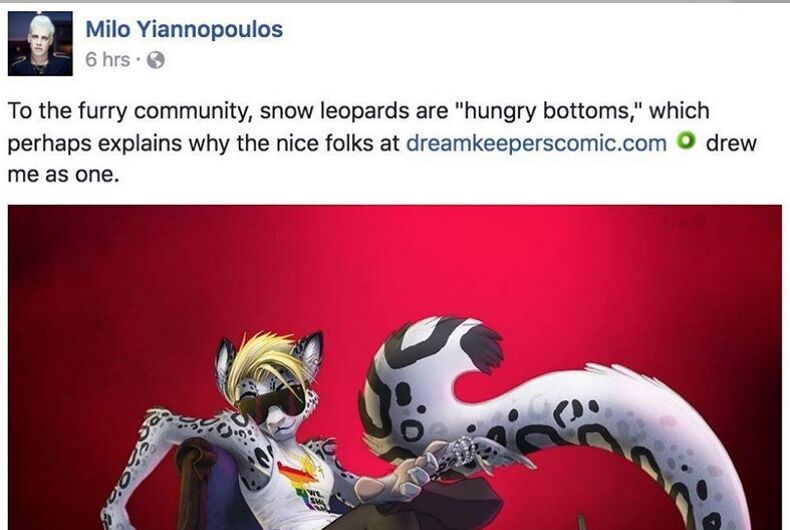 Professional troll Milo Yiannopoulos is trying to go to a furry convention, but other attendees are trying to stop him.

Yiannopoulos posted to Telegram – one of the few platforms that hasn’t kicked him out – that he had signed up and sent payment for Midwest FurFest, a convention for furry fandom that takes place in suburban Chicago this coming December.

“See you there bitches,” he wrote. He also said that he offered to host a panel on “the politics of fur” and told people to message him if they wanted to meet up for “dinner, drinks, photos or anything else.”

In 2016, he posted a picture of himself as a snow leopard to Facebook, which may have been his “fursona,” a representation of himself as a non-human animal. At the time people didn’t really know if that meant that he’s a furry, but apparently he is.

On Twitter, furries were saying that they didn’t want him at the convention.

Hey for those that don't know, Milo is a prominent figure of the alt-right who spews hate against minorities on a constant basis.

Don't let him get away with this. Use this link or tweet at the con. This is the only way we're going to make a difference.https://t.co/HlnpZR3GhB https://t.co/kibdxgXP7y

Milo Yiannopoulos is a disgraced right wing troll who thrives on attention. This warning will be the only mention of him here. Do not allow him into MFF. Do not give him attention. Do not talk about him. Do not spread anything he says. He turns kids into Nazis. Stay away. pic.twitter.com/F87DU3YLls

Drop MFF a message at the following link that you don’t want a prominent hate figure like Milo attending. His hateful rhetoric has no place in our community space. https://t.co/KBwu1W6rHa

The event’s organizers put out a statement on Twitter saying that they were “investigating all concerns.”

We have received a number of mentions and support tickets today – we assure all attendees that your safety is of the utmost importance and is not being ignored. We are investigating all concerns being relayed to us.

Yiannopoulos was a major player in the alt-right several years ago but has since fallen from the right’s good graces. Just last week he “can’t put food on the table,” a result of being banned from multiple major social media platforms.