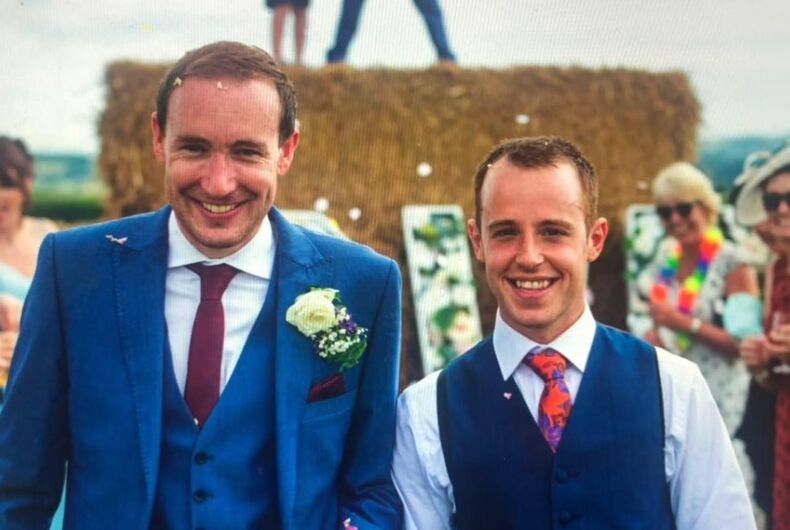 Callum Hodge and his husband Ashley Jenkins at their wedding.Photo: Callum

A gay couple received a homophobic letter telling them to move their wedding “far, far away.”

Callum Hodge and Ashley Jenkins recently got married in Norton Malreward, a small town in England with a population of 246. Callum’s mother Janie received a letter before the July 13 wedding saying that it was the “consensus of the village” that the wedding shouldn’t happen in the town.

“Callum should be ashamed of himself for putting his grandparents through this,” the letter said. “He won’t go to heaven.”

“You need to lead him down a new path in life. The wedding should take place far, far away from the village. This is the consensus of the village.”

“I was absolutely gobsmacked and just devastated to read it,” she told Somerset Live.

She said that she kept the letter secret from her son because she didn’t want to ruin his big day.

“I didn’t want to speak to anyone or acknowledge anyone in the village because I thought everyone was out to get us,” she said. “It is vile. It made me feel completely unwelcome in the village. The letter is so cruel and it made me very upset.”

She contacted police, though, because she didn’t know what the letter-writer was going to do.

“I was so worried something would happen on the wedding day, like a protest or something,” she said. “This person tried to ruin our day and it is so hateful.”

Janie said she told Callum about the letter a week after the wedding. He described it as “evil.”

“I found it really upsetting,” he said. “I lived in that village for 29 years. I feel pity for that person. Why do they feel as though they have a right to do that, to try to ruin our day. I was more angry at how it made my mum feel.”

He said his mother “was made to feel completely unwelcome in the community. She felt like an outcast.”

Callum posted about the letter on Facebook and said that he was overwhelmed by community support.

“After that so many people came to the house or stopped us in the street to say it had nothing to do with them,” he said. “The amount of support we received showed it wasn’t the village that felt like it as a whole. It is just some bigoted individual.”

Avon and Somerset Police said that they are treating the incident as potential hate mail.

#TeamChrissy: Why is Chrissy Teigen trending on Twitter? Trump.