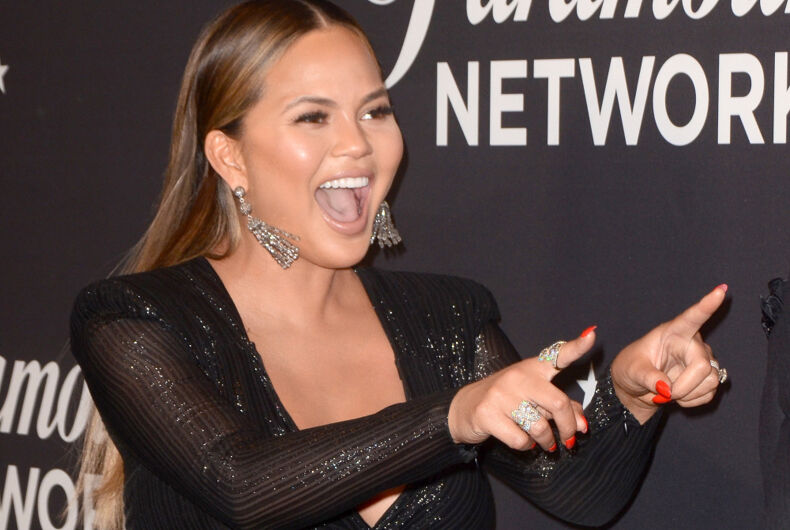 Chrissy Teigen at the Lip Sync Battle LIVE: A Michael Jackson Celebration at the Dolby Theater on January 18, 2018 in Los Angeles, CAPhoto: Shutterstock

#TeamChrissy is trending on Twitter after President Donald Trump launched a sexist broadside against model and television host Chrissy Teigen.

Teigen’s husband, singer John Legend, appeared on NBC Nightly News to discuss criminal justice reform with host Lester Holt before Trump took to Twitter. While Legend was the one who appeared on the program, urging viewers to “become voters that think about the criminal justice as an issue they can affect,” Trump took an especially nasty swipe at Teigen – and she has responded in kind.

Trump took affront, apparently believing he wasn’t given credit for the bipartisan First Step Act he signed into law in December 2018. The law reduces mandatory sentences for some crimes and more than 3,000 inmates will be released.

“But now that it is passed, people that had virtually nothing to do with it are taking the praise,” Trump tweeted during a multi-tweet screed. “Guys like boring musician @johnlegend, and his filthy mouthed wife, are talking now about how great it is—but I didn’t see them around when we needed help getting it passed.”

Related: Kristen Stewart says she was told not to hold a woman’s hand in public if she wanted big roles

Teigen, hardly a wallflower, quickly shot back and pointed out that Trump’s well known distaste for strong women of color was on obvious display – along with a good dose of sexist cowardice.

“lol what a pussy ass bitch,” she shot back. “tagged everyone but me. an honor, mr president.”

Shortly after, she posted a photo of herself drawing a sign for her daughter’s birthday, and added, “Luna, remember the night before your first day of school? When mommy was making your sign and the pussy ass bitch president had his 9th meltdown of the day”.

“the absolute best part of his tweet is that I literally didn’t speak in the special, nor was I mentioned. I’m cackling at the pointless addition of me because he cannot not be a bitch,” she tweeted in a follow up.

The internet, of course, has rallied to defend Teigen, and #TeamChrissy started trending quickly – as did another hashtag she gave a boost.

no guys no please do not make this trend, for it is my fight with #PresidentPussyAssBitch, not yours!!!!!! https://t.co/hSJ0UxjbaO

Worth noting the woman mentioned, @chrissyteigen, doesn't have a name…is just "a filthy mouthed wife," and he husband is John Legend the musician. https://t.co/x9PivM8qdx