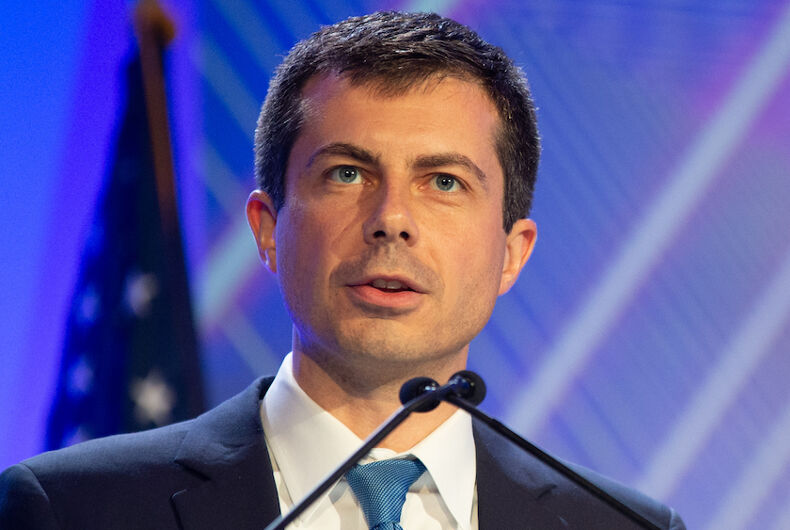 In a public Facebook post, Franklin Graham, CEO of the Billy Graham Evangelistic Association and son of Billy Graham, recently criticized gay Democratic presidential candidate Pete Buttigieg for his stance on abortion and (again) for being a gay Christian.

In an interview with the popular radio show The Breakfast Club, Buttigieg explained his own stance on reproductive rights, stating:

“[Anti-abortion people] hold everybody in line with this one piece of doctrine about abortion, which is obviously a tough issue for a lot of people to think through morally. Then again, there’s a lot of parts of the Bible that talk about how life begins with breath. Even that is something that we can interpret differently. . . . No matter what you think about the cosmic question of how life begins, most Americans can get on board with the idea of, ‘I might draw the here. You might draw the line there.’ The most important thing is the person who should be drawing the line is the woman making the decision.”

In the first presidential debate, Buttigieg said, “I think the [abortion] dialogue has gotten so caught up on when you draw the line that we’ve gotten away from the fundamental question of who gets to draw the line. And I trust women to draw the line.”

Related: Franklin Graham tells parents to pull kids out of school because the lessons are “an affront to God”

Mayor Pete Buttigieg has been speaking openly about his support for abortion, which he says is a woman’s right to choose. That’s a crock—No one has the right to choose murder. Pastor Rhyan Glezman, who is the brother of the man Mayor Pete is married to said, “I feel a sense of responsibility and stewardship of my faith to stand up and say something, to say, ‘No, that’s not true.'” Mayor Pete is trying to tell people that the homosexual lifestyle is okay with God and that abortion is okay. His brother-in-law is right when he said, “This is leading people astray and it’s very, very dangerous.” God defines right and wrong, not us. As Christians, we are to live by the standards He gives us in His Word. “I am the Lord, and there is no other; there is no God besides Me..” (Isaiah‬ ‭45:5).

In the past, Franklin Graham cited the Leviticus ‘death to gays’ verse when discussing Buttigieg. He has also accused Buttigieg of flaunting his homosexuality just by publicly acknowledging his husband.