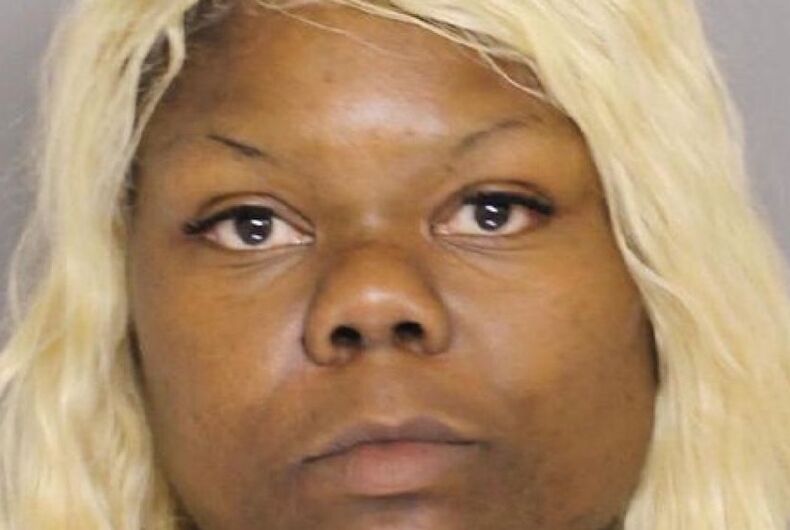 Police arrested 34-year-old Allison Daughtrey after Daughtery and her girlfriend were asked to leave a Baltimore, Maryland Days Inn hotel for allegedly having intercourse too loudly. Daughtrey later went into the hotel lobby to argue with hotel staff at which point she says a hotel guard hit her, causing her gun to go off with a bullet striking a doorframe.

What happened exactly is different, according to Daughtrey and the police.

Related: Hotelier tells lesbian guests they should be in cages & we have the emails

WMAR 2 News reports that a hotel guest called the front desk to complain about a fight happening in a nearby room. When hotel security notified police, Daughtery and her girlfriend told police that they weren’t fighting, they were having sexual intercourse.

“At the request of the security officer, police ordered the women to pack up and leave the hotel,” WMAR writes. They continue:

“According to the [hotel] guard, Daughtrey pulled out a handgun and pointed it at him. The guard then tried to take the gun away and wrestle Daughtrey to the ground, causing the gun to fire and strike a door frame in the lobby….

Police wrote in the charging documents that surveillance footage shows Daughtrey entering the lobby, getting into an altercation with the guard, and later pulling out a gun….

Daughtrey says the guard hit her first, at which point she alleges to have taken her purse and swung it at the guard which caused the gun to fall out and fire. “

The arresting officer allegedly entered the lobby after hearing the gunshot and = found a hotel guard restraining Daughtrey. She is being held without bond on charges of attempted second-degree murder, first- and second-degree assault and gun crimes even though she says she legally purchased the firearm in North Carolina.

Her preliminary court hearing will be on October 4.

Franklin Graham continues to attack Pete Buttigieg for being a Christian