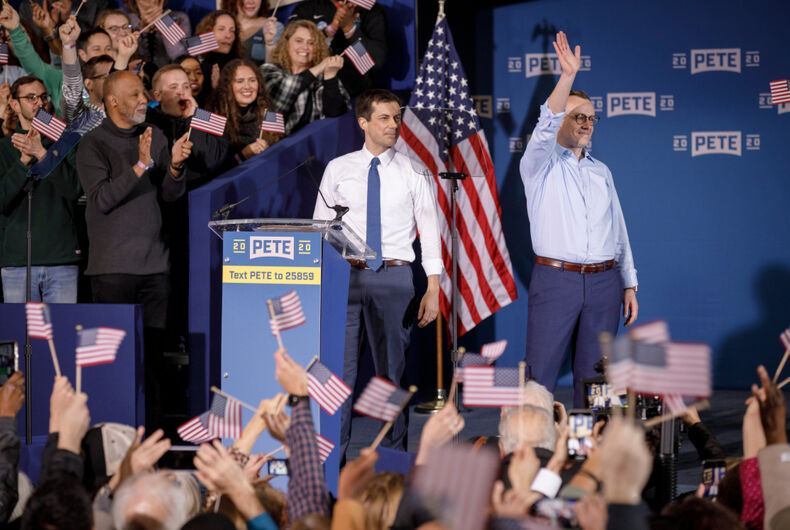 When White House Deputy Press Secretary Judd Deere took to Twitter for a half-baked denial of Vice President Mike Pence’s notorious anti-LGBTQ stances, Chasten Buttigieg wasn’t having any of it.

Buttigieg, who’s spouse, South Bend, Indiana Mayor Pete Buttigieg is the only out presidential candidate, snapped back on Twitter with one savage – and truthful – tweet. The would-be First Spouse has become a Twitter phenomenon with hundreds of thousands of followers eager for his sweet and witty glimpses of the couple’s lives.

But when Deere randomly decided to tell the internet that Pence isn’t homophobic by reminding everyone that he is, he chose one of the dumbest and most ridiculous defenses possible. Pence is willing to eat at the same table as gay people.

“For all of you who still think our @VP is anti-gay, I point you to his and the @SecondLady’s schedule tomorrow where they will join Taoiseach @LeoVaradkar and his partner Dr. Matthew Barrett for lunch in Ireland,” Deere tweeted with a copy of the Vice President’s official schedule.

“I’ve sat at tables with people who would gladly deny me the right to marry, who openly support conversion therapy, and who adamantly believe being gay is a choice,” Buttigieg shot back. “Doesn’t mean they’re any less homophobic because we shared a meal.”

The campaign claimed that Buttigieg is “attacking” Pence’s “Christian faith,” despite the two men sharing the same religion, after the candidate pointed out that Pence’s notorious brand of conservative and hateful evangelical Christianity has deliberately targeted LGBT people for discrimination.

While Buttigieg said that his Christianity is about “protecting the stranger and the prisoner and the poor person,” Pence’s is about “sexuality and a certain view of rectitude.”

“He said some things that are critical of my Christian faith and about me personally, and he knows better,” Pence told CNBC’s Joe Kernen. “He knows me.”

One of the Trump campaign’s other defenses of Pence has been that he worked with Buttigieg when the Vice President was the governor of Indiana. The two have previously shared meals, but it hasn’t stopped Pence’s homophobia from playing a major role in his political career.

While Pence was in office, he signed into law a measure that would have allowed businesses to violate civil rights laws by citing their religion, a law adamantly opposed by Buttigieg. After national outcry, state legislators tweaked the law to clarify that it couldn’t be used as an excuse to discriminate against LGBT people.

I’ve sat at tables with people who would gladly deny me the right to marry, who openly support conversion therapy, and who adamantly believe being gay is a choice. Doesn’t mean they’re any less homophobic because we shared a meal. https://t.co/cECWvnFUUV

A wedding venue refuses mixed-race & same-sex couples. They say they have that right as Christians.

This Tea Party politician made up a wild gay sex scandal about himself. He might go to jail for it.