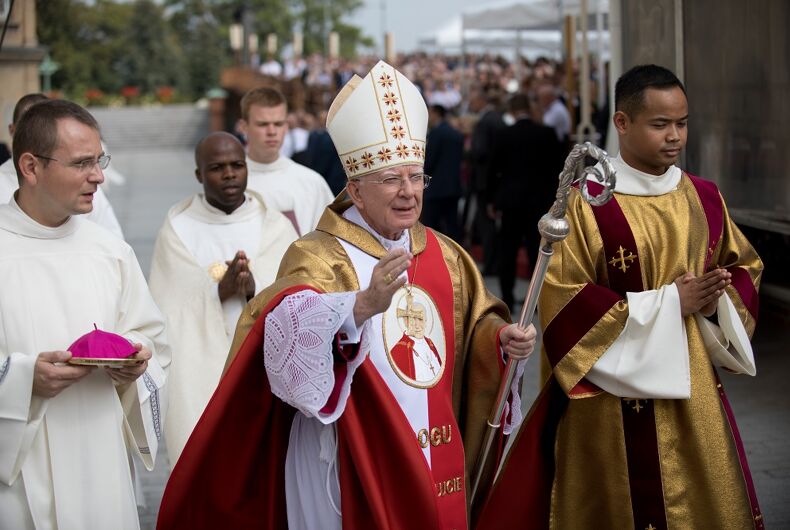 A high-ranking member of the Catholic clergy Poland went on an anti-LGBTQ rant about a “rainbow plague” that has been denounced as an incitement to genocide.

Archbishop Marek Jedraszewski was speaking at St. Mary’s Basilica in Krakow as part of the celebrations of the 75th anniversary of the outbreak of the Warsaw Uprising, a major uprising by the Polish resistance against the occupying German forces.

Jedraszewski said that there was a connection to Poland’s historical struggles and his hatred of LGBTQ people.

“Our land is no longer affected by the red plague, which does not mean that there is not a new one that wants to control our souls, hearts, and minds,” he said. “Not Marxist, but Bolshevik, but born from the same spirit: neo-Marxist. Not red, but rainbow.”

He went on to cite the Latin expression “Summum ius, summa iniuria,” which means “supreme law, supreme injustice,” or that an uncritical application of the law can be the greatest injustice.

“In the name of the so-called rule of law, you can hurt,” he said, adding that people who proclaim tolerance are bringing violence and “humiliation” to the country.

“The greatest tolerance, and at the same time the peak of intolerance…. The memory of graves urges us to defend ourselves and defend authentic freedom.”

Progressive politician Robert Biedron, who is gay, denounced Jedraszewski’s comments as an incitement to genocide.

“We already had such people, politicians who used similar words and that lead to huge slaughters, genocide. This is an incitement to crime, to hatred,” he said.

Anti-LGBTQ rhetoric and violence has been on the rise in Poland this past year. Dozens of cities declared themselves “free of LGBT ideology” last month and a major magazine has been distributing “LGBT-free zone” stickers to readers.

As elections are coming this fall, the far-right Law and Justice Party has amped up its attacks on LGBTQ people. Party chief chief Jaroslaw Kaczynski said that LGBTQ people are a “threat” to Polish identity.

“We’re against the affirmation of LGBT ideology and the aggressiveness of this ideology which attacks our basic national and Catholic family values,” said Law and Justice Party politician Janusz Szewczak last week.

The party maintains close ties with the Catholic Church, which is now joining in the anti-LGBTQ rhetoric as elections approach.

But LGBTQ people in Poland haven’t accepted the aggressive rhetoric silently. People responded en masse on social media, making the hashtag #jestemLGBT (I am LGBT) the top trending topic for a moment on Polish Twitter as they came out in defiance.