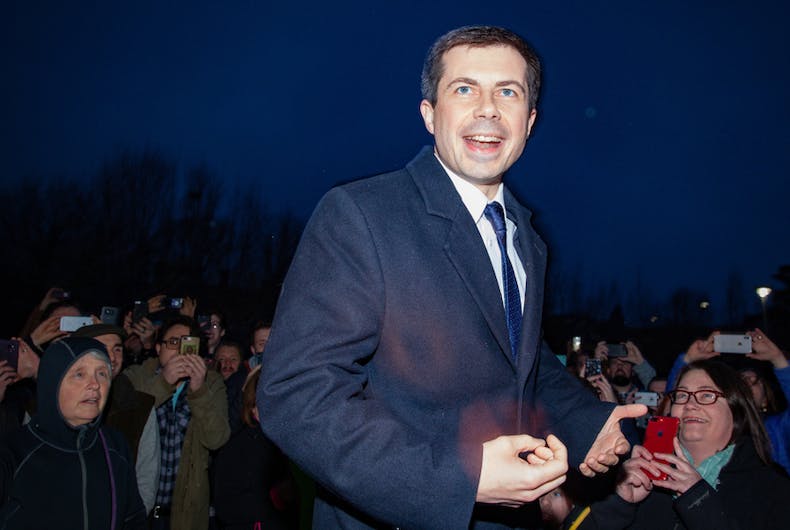 It was a mistake. Biden just got his actual web address — JoeBiden.com — mixed up with his text message campaign for followers — text “JOE” to 30330.

But Pete Buttigieg quickly capitalized on Biden’s error, seizing the URL for Joe3030.com and redirecting it to his personal campaign website — a quality troll move that may garner a few visits from misled Biden supporters.

But beyond this sly gimmick, Buttigieg’s debate performance had other notable highlights.

When pressed on gun violence, Buttigieg correctly said, “We haven’t had a system in Washington capable of delivering what the American people have told us they want.”

Put another way, winning the presidency through campaign promises is one thing; having a Congress that can actually deliver on those promises by passing bills is another.

When asked about U.S. military interventions abroad, Buttigieg advocated a withdrawal from Afghanistan by 2021 and a three-year hiatus on any future use of congressionally authorized military force.

However, he stumbled when asked about racial issues, an issue he needs improvement on considering accusation of mishandling police violence in his hometown of South Bend, Indiana.

He responded, “As an urban mayor serving a diverse community, the racial divide lives within me,” a tone-deaf line which seemingly implies his non-existent bi-racial identity.

But when asked at the end of the debate about his being the youngest candidate onstage at age 37, Buttigieg answered masterfully. He said, “I don’t care how old you are. I care about your vision… It matters that we have a new generation of leaders stepping up around the world.”

These two traits can lead to an addiction to dating apps