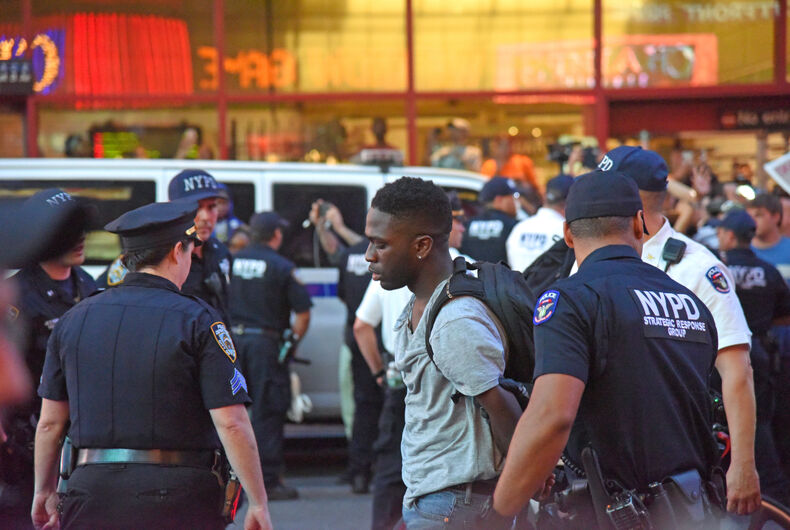 It’s a grim statistic that feels all too at home in 2019. Officer-involved shootings and other uses of force by police is now the sixth leading cause of death for men age 25-29. The number declined with age — peaking between 20 and 35.

For Blacks in America, the numbers are far worse: Around 1 in every 1,000 black men will be killed by a police officer. When one accounts for age, a black many in his 40s faces the same risk as a white man in his 20s. Latino men, too, are more likely to be killed by police when compared to white males.

Related: Police say this trans woman’s murder wasn’t a hate crime. Her mom’s not buying it.

The abstract continues, noting “the average lifetime odds of being killed by police are about 1 in 2,000 for men and about 1 in 33,000 for women.”

The study did not break out results by sexual orientation or gender identity, instead being ranked by race and gender. In the LGBTQ community, Black trans women face the highest level of violence and murder, with at least 15 transgender people killed so far this year alone. Many are deadnamed or misgendered by the police when the crime is reported, but Black gay and bi men face the highest levels of violence by police officers.

The LGBTQ community’s relationship with the police has often been fraught at best. One of the major flashpoints for LGBTQ organizing the drive for civil rights was the Stonewall Riots – a response to a police raid on a gay bar. While levels of violence against LGBTQ people has decreased, many cities and organizations still don’t want cops participating in pride parades based off the history of oppression and violence.

The research, out of Rutgers university had to go beyond Federal resources: There is no reliable federal data specifically focused on killings by police officers, forcing researchers to turn to materials from Fatal Encounters, a project that pulls in data from numerous sources to compile a comprehensive database of officer-related killings.

The study also doesn’t make any value judgments about the killings themselves, or if they were justified. It is worth noting that the Washington Post did find that more than half of those shot and killed by police so far this year were also carrying firearms.

Researches also suggested that an increased use of police for roles they’re not intended for may be a contributing factor to the increase, too. The study, therefore, recommends better funded social programs as well as restrictions on the use of armed police officers as first responders in non-criminal crisis situations.

“Austerity in social welfare and public health programs has led to police and prisons becoming catchall responses to social problems,” noted the researchers.

Republicans should support firearm regulation for these two big reasons