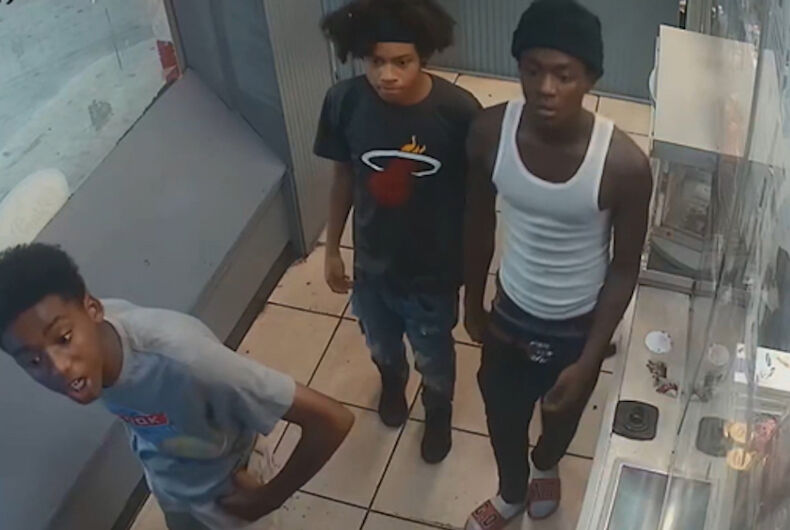 Washington D.C. police are seeking four men caught on video who are suspects in the August 2 bashing of a trans woman, local performer and bar manager named Alicia Love.

A group of men attacked Love after she left work at the nearby Eagle Bar at 3 a.m. that night. As she walked to a local gas station, the group of men called her slurs like “tranny,” “he-she” and “faggot,” kicked and punched her and stole $300 in cash, her phone, her bank card and her ID.

Police have said they’re investigating the incident as a possible hate crime. They’ve also recently released video from the night of the attack in hopes that the public might identify the suspected perpetrators.

The Washington Blade describes the video:

The video released by police on Friday shows three of the young men slowly entering the small convenience store at the gas station and walking toward Wood, who was off camera. The video also shows a fourth young man that police are identifying as another suspect in the case who is seen outside looking into the store through a large glass window.

Here is the video of the suspects:

In a statement, D.C. police said, “Anyone who can identify these individuals or who has knowledge of this incident should take no action but call police at 202-727-9099 or text your tip to the Department’s TEXT TIP LINE at 50411.”

When Love ran to a nearby Citgo gas station for safety on the night of the attack, the cashier, who was enclosed in a booth, refused to help her.

“I told him they’re coming after me, can you please let me in,” she said. “I’m like I need help. So, he looked at me and ignored me.”