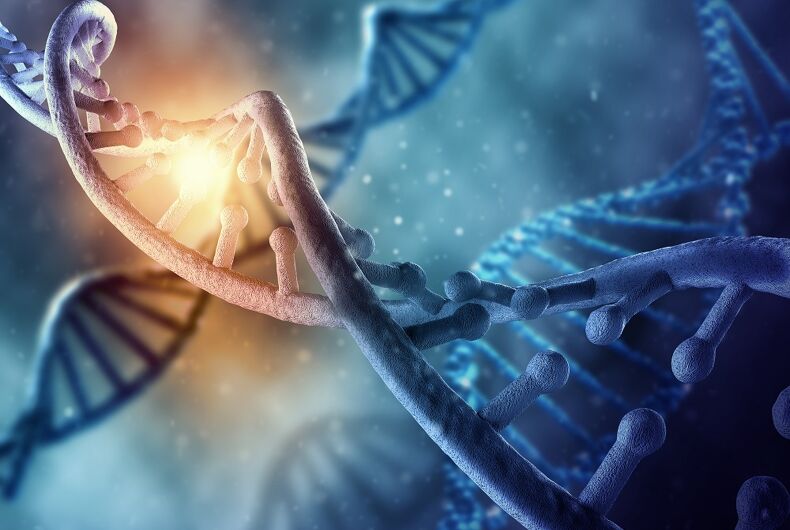 A new study found a link between several genes and homosexuality.

Andrea Ganna, the lead author of the study published in Science and European Molecular Biology Laboratory group leader at the Institute of Molecular Medicine in Finland, said that the research just shows that sexual diversity is “a natural part of our diversity as a species.”

The study is the largest ever to examine the link between sexual orientation and various genes, using over 470,000 participants from Sweden, the US, and the UK.

They used DNA data from the UK Biobank study and from 23andMe, a private genetics company. 26,000 participants reported at least one same-sex sexual encounter.

Related: A study found evidence of a genetic determinant of sexuality & that’s OK

While no gene can predict someone’s sexual orientation, they found a strong correlation between homosexuality and five autosomal loci (areas of DNA not on sex chromosomes). They believe that the loci are involved in our sense of smell and hormone regulation.

The researchers stressed that the presence of the genes does not in itself determine someone’s sexual orientation. Instead, they found that between 8% and 25% of the variance in sexuality could be explained by the genes. Some of the genes had more of an effect on men, some one women, and some on both.

“Same-sex sexual behavior is influenced by not one or a few genes but many,” the authors wrote.

“It just shows us that same-sex sexual behavior is much more complex than this idea of having just one gene influencing it all,” said Eric Vilain, director of the Center for Genetic Medicine Research at Children’s National Health System. “It shows that there are genetic factors, which we had suspected long ago… but it also shows those genetic factors do not tell the whole story.”

The study falls in line with previous research into a genetic connection to homosexuality. Studies have shown that some families are more likely to have gay men in them, for example, while others have found correlations between homosexuality and environmental factors like having older brothers.

Vilain said that the study could have been improved if the researchers focused on gay and bi people instead of just asking if people have ever had a same-sex sexual experience and lumping them all together. He also said that the study should be replicated with more diverse participants.

“This new research also reconfirms the long established understanding that there is no conclusive degree to which nature or nurture influence how a gay or lesbian person behaves,” said Zeke Stokes of GLAAD. “Being gay or lesbian is a natural part of human life, a conclusion that has been drawn by researchers and scientists time and again.”

“The identities of LGBTQ people are not up for debate.”

Does this pic prove that Debra Messing & Megan Mullally are feuding?