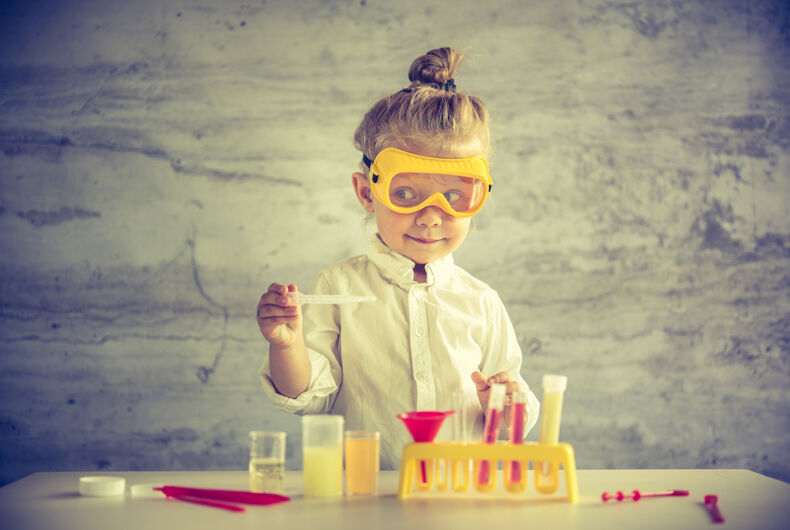 The differences were not statistically significant because of the small sample size, and the research hasn’t been replicated yet. It’s preliminary, and science is a conversation like any other: the first statement is never the last.

The researchers themselves were working within a literature that says that homosexuality is only 30-40% heritable.

Of course, we have to go through the same freak out with this study that we do with every other “gay gene” study.

First, it comes from the haters. ChurchMilitant.com provides a good example, quoting a few researchers saying pretty much what I just wrote up there – the study is, at best, preliminary.

Then they go on to explain what really causes homosexuality. “There is, however, overwhelming evidence in psychology, however, that points toward homosexual abuse and poor father-son relations as a key cause of homosexual proclivity.”

That evidence was a rightwing activist taking a camera to a bar and asking gay men if their parents abused them. Give them the Nobel Prize already!

But it also comes from the LGBTQ activist set. Kasandra Brabaw at Refinery29 gives the standard response:

There are about a million theories (in my estimate, at least) about what causes someone to be gay, but I’d like to knock them all down with one simple question: Who cares?

I’m usually suspicious of people who write long columns explaining how little they care about a topic, and my suspicion paid off:

If a gay gene were proven to exist, some people worry that scientists would try to find a way to manipulate it in an effort to stamp out LGBTQ+ people. It would be a way to further label being gay as an abnormality. It could potentially send us back in time, to a moment when queer people feared ending up in a doctor’s office, scared and in pain, with a medical professional who was there to try to “fix” instead of help them.

Because people who believe that psychological or environmental factors cause homosexuality never try to “fix” us? Because we aren’t currently labeled as abnormal?

Because hate groups aren’t currently suing the city of Tampa for the right to send queer kids to therapists to get fixed?

There’s a reason that many LGB people want a genetic explanation to be found: the most intuitive outcome is that straight people will stop trying to fix us.

I agree with Brabaw on the political implications, though: it shouldn’t and doesn’t matter why some people are gay when it comes to social acceptance and good policy. Our culture has been much more swayed by the voices of LGB people than it ever would have been by scientific research.

If I’ve learned anything from America’s response to climate change, it’s that people’s beliefs are often not built around scientific research.

That doesn’t mean that I think it’s bad that scientists are working on this question. Activists like Brabaw don’t understand why anyone would research something with no political implications, but it’s simple: scientists are inherently curious people.

And sexual orientation is a pretty neat mystery. People in every culture and for as far back as we know have mostly had sex with the opposite sex. A minority in all of those cultures either had sex with both sexes or with the same sex. And we don’t know why.

Plus this little mystery is about sex, and people love to think about sex.

Brabaw correctly points out that researchers spend a lot more time working on “Why are some men gay or straight?” instead of “What determines women’s sexuality?” or “Why are some people bi?”

But the obvious response to those criticisms is more research, not less.

And research on sexuality should not just be happening in genetics and developmental biology and psychiatry, but also in fields like history and sociology. Even finding factors that determine sexual attraction wouldn’t explain how people perceive them, describe them, and communicate about them.

Activists generally only interact with research when they’re trying to prove a point or to determine the best policy, so they often develop a very utilitarian understanding of research itself.

But there is so much research being done that no one will ever use for anything. Think of orchids – if university professors didn’t like those flowers so much, would botany journals spill so much ink about them?

The bottom line is that it’s human to be curious, scientists are going to science, and getting mad isn’t going to stop people from wondering why we’re all different.

Ellen played Pictionary with a sloth