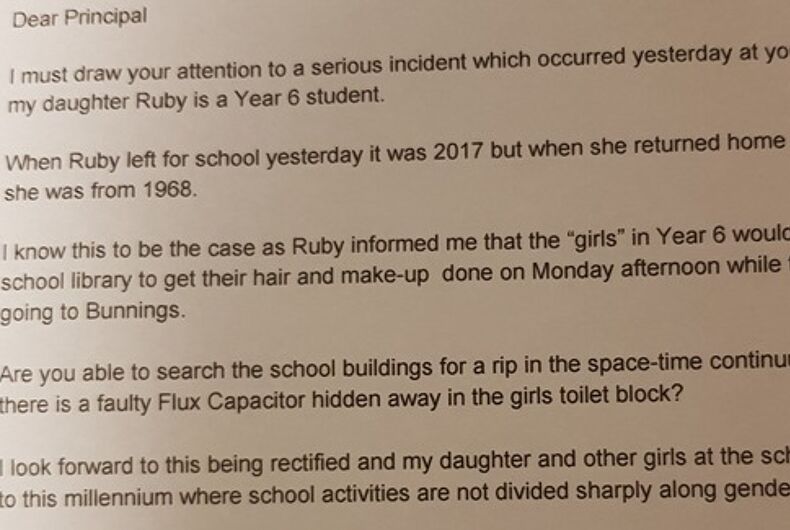 Dubbo West Public School in Australia has a “Boys and Girls Day,” which, as the name implies, reinforces gender stereotypes. The boys on that day got to go to a DIY workshop at a Bunnings hardware store, while the girls went to the library to get “treated to fabulous hair and light make-up.”

12-year-old Ruby, who wants to be an engineer, asked to go to the hardware store but was told that she had to go on the girls’ trip.

I must draw your attention to a serious incident which occurred yesterday at your school where my daughter Ruby is a year 6 student.

When Ruby left for school yesterday it was 2017 but when she returned home in the afternoon she was from 1968.

I know this to be the case as Ruby informed me that the “girls” in Year 6 would be attending the school library to get their hair and make-up done on Monday afternoon while the “boys” are going to Bunnings.

Are you able to search the school buildings for a rip in the space-time continuum? Perhaps there is a faulty Flux Capacitor hidden away in the girls toilet block?

I look forward to this being rectified and my daughter and others girls at the school being returned to this millennium where school activities are not divided among gender lines.

He posted the letter on Facebook and it was shared thousands of times. On Twitter, he thanked people for their supportive comments.

Ruby and I would like to thank you for the great comments of support. At 12 years of age my daughter is starting to notice there are plenty of people prepared to tell her what she can & can't do based solely on the fact she is female.
She would like this to change.
So would I.

A Department of Education spokesperson said that any student could choose either activity.