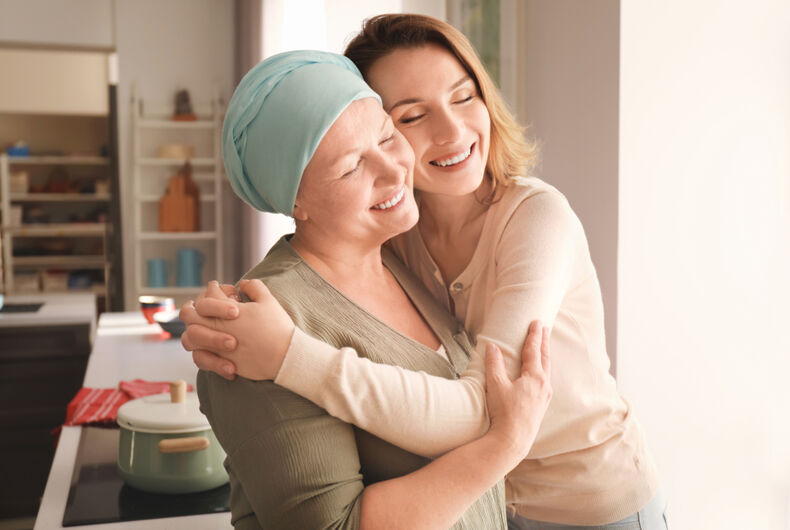 According to the National Cancer Institute, 1.7 million new cases of cancer will likely be diagnosed this year in the United States. While those numbers are grim, it’s important to know that more and more are surviving cancer each year.

Those who do survive cancer face a new burden, as poor access to care, including care for survivors, can dramatically affect a person’s overall quality of life. And for women who identify as lesbian, gay, or bisexual, there is far less access to care post-cancer than their straight counterparts.

A study posted in the Journal Cancer used data from the Behavioral Risk Factor Surveillance System (BRFSS) covering 2014-2017 on both men and women who had a history of cancer. Of the 70,524 cancer survivors included in the study, 1,931 self-identified as lesbian, gay, bisexual, or some other other non-heterosexual orientation.

Related: These flyers say that lesbian sex causes cancer. Who is passing them out?

“LGB women were the most disadvantaged,” lead researcher Ulrike Boehmer said to Futurity. Boehmer also noted that this disadvantage happened during a time when “we have seen the benefits of gaining healthcare access and protections,” noting both the Affordable Care Act and the Supreme Court win regarding marriage equality.

Nevertheless, Boehmer noted that LGBTQ people are more likely to have jobs that do not provide health coverage, and may face other financial barriers that prevent adequate follow-up care.

Boehmer also noted a lack of knowledge amongst doctors, particularly oncologists, about LGBTQ people. This is often cited as a reason LGBTQ people do not seek out medical care, and can lead to care that isn’t inclusive of the LGBTQ experience.

The study focused on cisgender people, citing a lack of data inclusive of transgender or nonbinary people to allow for proper analysis. This was only one issue raised by Boehmer about a lack of data to even properly study the issues LGBTQ people deal with when facing cancer treatment and appropriate after care.

“We need data to show what’s going on with respect to cancer rates and cancer mortality for the LGBT community,” said Boehmer. “We have a growing evidence base that there is a high rate of breast cancer among lesbian and bisexual women and high rates of cancer among gay and bisexual men.”

“There might be an epidemic going on that we’re not aware of,” Boehmer concluded.

Coke released some cute gay ads. Now the right is calling for a boycott.